Lessons about a highly efficient future of zero waste often come from the most advanced facilities in the most developed economies in the world: factories that produce goods without sending truckloads of junk to landfills; urban buildings that produce as much energy as they consume; school cafeterias that minimize food waste.

These efforts are all very impressive. In the developed world, we have abundant and comparatively cheap resources, including water, food, steel, and electricity. Even so, it takes an immense amount of careful planning, thoughtful design, and adherence to best practices to operate with minimal waste. To a degree, you must possess the capacity to make investments in conservation technologies and systems if you want to live as if you are poor in resources.

However, it’s clear to me that we could learn a lot about avoiding waste by spending a little time in what may be, by design, one of the least developed places on earth — Tanzania’s Serengeti National Park. 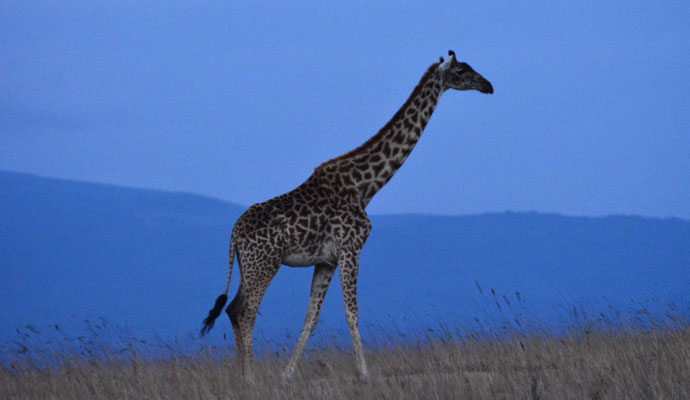 A scene from "Bush TV." With no televisions, it's the only channel Tanzania’s Serengeti National Park receives (or so the joke goes).
Photography credit: Ethan Gross

Earlier this month, I spent several days at the Nomad Serengeti Camp Number One, a mobile encampment with no fixed structures in a country of wide-open rolling savannah, isolated trees, and more zebras, elephants, elands, and gazelles than you can count.

This is not an easy place to deliver goods and services. There are no paved roads, no villages or towns inside the 5,700-square-mile park, no power lines, and no cell towers. The camp is a good hour’s drive from the Kogatende Airstrip, 90 minutes if you stop to watch the wildebeests make the precarious crossing of the gurgling Mara River.

It’s only when you live off the grid — even if it is while glamping for just a few days — that you realize how many resources are used to run many of the hospitality and food-service businesses in developed countries, and how it is possible to operate these businesses with very little in the way of resources.

The Serengeti gives a new and different meaning to the term “garbage in/garbage out.” There’s no garbage collection or landfills. All the trash brought in by guests and their hosts has to be brought out.  And so there are none of the plastic water bottles that are so ubiquitous in the U.S. workplace — everybody is issued a metal one that is refilled from water purified on-site. The toilets are rudimentary but highly functional, flushed with a tiny stream of water. Showers last about 75 seconds — water is heated over a wood fire and poured into a large bucket above the showerhead. (Gravity provides the water pressure). Heat, when necessary, is provided by hot water bottles. There’s laundry service, but the sun is the dryer. Each tent has a battery, which is charged by a diesel generator that runs for a few hours each day; the battery then powers a half-dozen very low-wattage light bulbs. When you’re not in the tent, every light goes off. In other words, this “hotel” runs with virtually no power.

The Serengeti gives a new and different meaning to the term “garbage in/garbage out.”

To be sure, a lot of the conveniences and necessities most hotel guests (especially those traveling on business) need, or think they need, aren’t present in the Serengeti. Because there’s no Wi-Fi or cell power, you don’t have to keep computers and smartphones running. And there’s no cable, so you don’t need to power televisions. (There is, the joke goes, one channel, Bush TV — i.e., the parade of large mammals ambling by.)

But the experience does make you think (especially because there is only Bush TV to distract you from your thoughts). Count the number of light bulbs, appliances, and other devices that are either turned on or just drawing power from a wall socket when they’re not being used in your office and home. Or consider the amount of time your house or workplace is heated or cooled and lit when nobody is in it, or the volume of trash even the most environmentally conscious teams and families produce.

The contrast in the way food is delivered is also immense. For a week, we ate virtually no processed or packaged foods. Everything that was prepared — fruits, vegetables, meats, grains, and drinks — was trucked in and carefully measured. Food waste is buried on-site. Because all recyclables and trash plastic have to be trucked out a great distance, tremendous care is taken to avoid their use. No paper napkins or plastic plates, no disposable cutlery. In a week, my sustenance at the park generated about as much material waste as a single trip to the deli near my office for a cup of coffee and a turkey sandwich: the paper bag, the paper wrapping of the sandwich, the plastic clamshell container, napkins, a plastic stirrer, packets of salt, pepper, mustard, mayonnaise, and sugar, all placed in a plastic bag.

Of course, this is an extreme example. And there’s no way to analogize directly between a safari camp and a midtown Manhattan office tower. But extreme situations serve to highlight useful contrasts. Nobody would argue that you can live, work, and deliver high-value-added services in New York in the absence of modern infrastructure, and by using as little power and generating as little waste as a tourist operation in remote Tanzania. But it’s only when you’re around a business that treats every resource as precious that you start to realize just how much waste there is in your own daily life.