Nicholas Carr is an every-silver-cloud-has-a-dark-lining kind of guy. In Does IT Matter? Information Technology and the Corrosion of Competitive Advantage (Harvard Business Review Press, 2004), he argued that IT is not a sustainable competitive advantage because new tech can be adopted so quickly by other companies. In The Big Switch: Rewiring the World, from Edison to Google (W.W. Norton, 2008), he articulated the Big Brother–like social and economic consequences of the then-nascent idea of cloud computing. And in The Shallows: What the Internet Is Doing to Our Brains (W.W. Norton, 2010), Carr contended that being online can rewire our brains in harmful ways. 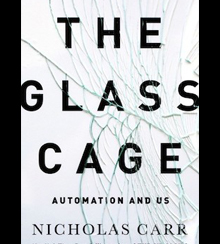 I don’t always agree with Carr, but I read his books because they are always timely, thought provoking, and highly useful for puncturing the sometimes irritating claims of digital utopians. His new book, The Glass Cage: Automation and Us (W.W. Norton, 2014), is no exception.

The Glass Cage arrives close on the heels of breathless announcements about driverless cars and delivery drones, the kinds of automation advances that promise to take us into uncharted territories. They also prompt Carr to wonder what might happen to us as machines take over more and more of the tasks that once required the human touch.
“If you want to understand the human consequences of automation,” Carr writes, “the first place to look is up. Airlines and plane manufacturers, as well as government and military aviation agencies, have been particularly aggressive and especially ingenious in finding ways to shift work from people to machines.”

The silver cloud of aviation automation has been an impressive reduction on accidents: From 1962 through 1971, there were 133 deaths per million passengers on U.S. commercial flights; from 2002 through 2011, there were 2 deaths per million passengers. The dark lining, Carr reports, is that “a heavy reliance on computer automation can erode pilots’ expertise, dull their reflexes, and diminish their attentiveness.” This has resulted in avoidable accidents attributed to pilot error, such as the loss of a commuter flight heading for Buffalo, NY, in which 50 people died, and the downing of a Rio de Janeiro-Paris flight, in which 228 people died, both in 2009.
While these are dramatic examples outside the norm, Carr says they show how “automation remakes both work and worker.”

They also raise a question that leaders in all kinds of companies might want to keep in mind as they pursue the efficiencies of automation: What will the cost be in terms of human capital?

One cost is the possibility that more and more errors will arise from automation complacency, in which the seeming infallibility of computers lulls us into a false sense of security, and automation bias, in which we give undue weight to digital information. Another cost could be the loss of the employee skills that have been automated—and worse, an inability to relearn those skills once they are gone. Yet another, according to Carr, could be a stifling of “curiosity, imagination, and worldliness”—which sounds pretty bad in a time when innovation is often touted as the only reliable competitive advantage.

What’s needed to avoid these consequences is an approach to automation that captures the consistencies and efficiencies that it offers without losing the human judgment and intuition that machines can’t replace. This is the goal of human-centered automation. “Rather than beginning with an assessment of the capabilities of the machine,” writes Carr, “human-centered design begins with a careful evaluation of the strengths and limitations of the people who will be operating or otherwise interacting with the machine… The goal is to divide roles and responsibilities in a way that not only capitalizes on the computer’s speed and precision but also keeps workers engaged, active, and alert—in the loop rather than out of it.”

The Glass Cage is not as much a solution to automation’s dark lining as it is a reminder that every business decision involves tradeoffs. Nicholas Carr is giving us a look at what those tradeoffs might entail as automation reshapes the world of work. It’s going to be up to the companies that adopt it to figure out how to capture its benefits without succumbing to its deleterious side effects.