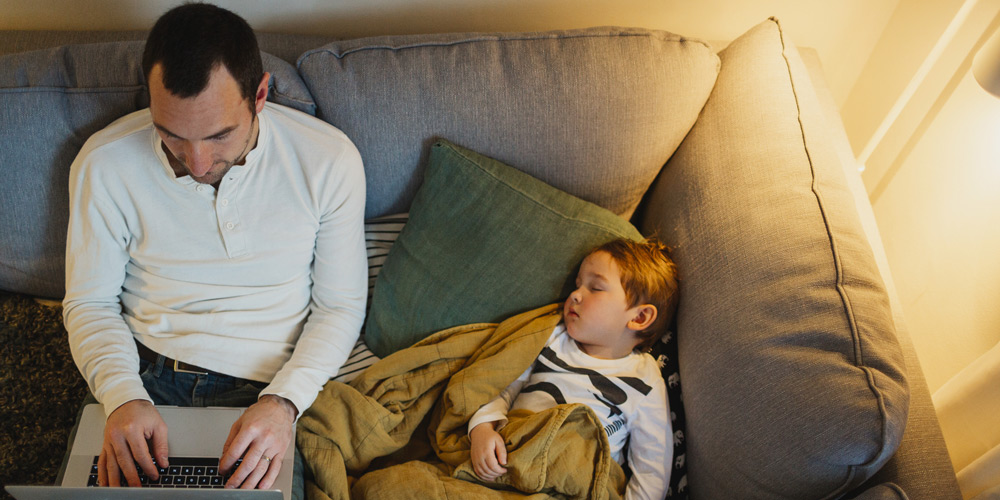 One of the biggest forces holding back gender equality in the workplace is a set of structures left over from what I call the “Mad Men era.” Laws, policies, and stigmas that, in households where there is one male parent and one female parent, push women to do more of the caregiving at home, while pushing men to spend more time at work.

This has been clear in the data for many years. Despite the stereotype of the lazy, uninvolved father, through a combination of paid work, unpaid work, and childcare, dads put in as many total work hours as moms do.

Men want to spend more time at home. A survey by Promundo and Dove Men+Care, with whom I partner on research about dads, found that 85 percent of men in seven countries, including 79 percent in the United States, say they would do anything to be more involved at home after having a child. But they can’t afford to risk their jobs.

Why would spending more time at home be such a risk? Because of the stigma placed on that flexibility. People who work from home and/or at nontraditional hours often face backlash. This stigma can be especially strong against men. As Joan Williams, founding director of the Center for WorkLife Law, told me in an interview for my book All In, it’s a type of “femininity stigma.” Because many executives still think of caregiving responsibilities as women’s work, they punish men who seek flexibility. Her research found that men have been fired, demoted, or lost job opportunities for seeking flexibility or taking paternity leave when it’s available.

I’ve seen this in action. Some executives believe the negative stereotypes of lazy fathers. So they think that when a man says he needs to be home to care for his children, he’s actually going to kick up his feet and relax. As a result, they pressure men to stay in the office for more and more hours, and punish those who don’t. (I should note that some of the dynamics described here affect single parents and same-sex parents.)

The coronavirus pandemic may help to break down the flexibility stigma and the sexism it entails — if business leaders learn the right lessons from it. Millions of people are stuck at home. Men and women are in this predicament together. And businesses may finally come to see certain facts about remote work. People in power, including C-suite executives who have never before tried working full days from home (only 15 percentPDF of people in a September 2019 Bureau of Labor Statistics survey worked entire days at home), are discovering what many of us have long known: This kind of flexibility can increase productivity. With no commute time and fewer distractions, it’s possible to blast through some work tasks faster than in an office.

The COVID-19 crisis could help end the flexibility stigma and improve gender equality — if businesses learn the right lesson.

However, there’s also a caveat for the current moment. Teleworking during the pandemic is nothing like teleworking in general. Millions of people are caring for loved ones and making sure their children get educated through the online programs their schools are making available. It’s also a time of great stress and anxiety, all of which reduces productivity.

Executives need to understand that, in peaceful times, businesses reap the benefits of male and female employees working from home without the current drawbacks.

They also need to realize that men and women are equally capable of accomplishing work and taking care of their children. As business leaders seek to understand what their staff is going through now, they should consider it through a lens of gender equality. Any assumptions that men should be more available than women at this time must finally be put to rest.

Unfortunately, I’m hearing some stories of things moving in the wrong direction. A lawyer friend told me her husband is capable of doing his work at home, but his business insists that he keep coming into the office, which is open because his work (in the oil and gas industry) is considered essential. Only when she has an essential meeting or hearing to attend does his company allow him to work from home. The result? She ends up doing much more of the caregiving for their two children, ages 12 and 8.

To be sure, there are numerous ways in which this pandemic could damage gender equality efforts. In a preliminary paperPDF, researchers from Northwestern University, the University of Mannheim, and the University of California–San Diego note that drops in employment are disproportionately affecting sectors with many women workers and that “massively increased childcare needs” have a “particularly large impact on working mothers.”

But they also find “opposing forces which may ultimately promote gender equality in the labor market.” Businesses are quickly rolling out flexible work arrangements, which are likely to endure. And the fact that many fathers are now taking more responsibility for childcare “may erode social norms that currently lead to a lopsided distribution of the division of labor in house work and child care.”

The idea of either parent being a “primary” caregiver is quickly becoming outdated. But the fact that more fathers are suddenly at home during traditional work hours gives everyone a chance to stand up for equality. In our homes, we must act on and display a real belief in dividing things equitably. (Of course, equitable doesn’t mean exactly equal time spent on caregiving if one parent has more paid work than the other.) Just as important, we must make clear to our managers what’s happening, and expect our businesses to support it.

As we work to get through this crisis, men and women have a chance to show businesses that all of us can be there for our families and our jobs — and show our children what greater gender equality can look like.