In late 1999, while it was still the 800-lb gorilla in the video rental market, Blockbuster Video called in some outside help to address its biggest customer complaint: late fees. One of the calls was to Michael Schrage, then a research associate at MIT Media Lab, whose book, Serious Play: How the World’s Best Companies Simulate to Innovate, had been recently published by Harvard Business School Press. 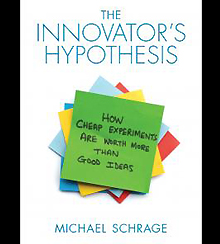 Schrage’s brief, as he explains it in his new book, The Innovator’s Hypothesis: How Cheap Experiments are Worth More Than Good Ideas (MIT Press, 2014), was simple: “Help Blockbuster transform late fees from a primary pain point into a marginal concern for the company and its customers.” So he did some poking around in Blockbuster’s databases and stores.

Schrage found that the hapless customers who were paying the most in late fees were also the company’s most prolific renters. And even as they continued to patronize the company, these customers were venting their frustration to Blockbuster employees, as well as to other existing and potential customers. Several of them sued the company. (One of them, Reed Hastings, turned out to be something less than hapless. After being charged US$40 in late fees on Apollo 13, he founded Netflix, which had no late fees and played an instrumental role in driving Blockbuster into bankruptcy in 2010.)

“But,” writes Schrage, who has also contributed to s+b, “this seething ‘renters’ rebellion’ coexisted with an irrefutable business fact: The money was great.” In those pre-streaming days, analysts estimated that that 20 percent or more of Blockbuster’s pretax profit came from customers who couldn’t get it together to return rentals on time.
Blockbuster was considering several costly and complicated solutions to the conundrum, but Schrage thought that the company didn’t know enough about its late-fee customers to undertake a major initiative. Instead, in a meeting with management, he proposed a simple, inexpensive experiment in which a dozen or fewer Blockbuster stores would send reminders to customers to return movies before late fees were incurred. “I went down in flames,” recalls Schrage.

Blockbuster wanted to eat its cake and have it, too. The company was looking for a big, strategic-level solution that would eliminate the customer service problem without putting its revenues at risk. The one it adopted—an extended rental period after which the customer was charged the full price of the movie—proved not only unpopular, but illegal. The plan was abandoned, the company reinstituted its original late fee policy, and the downward spiral continued.

In rejecting his proposal, Schrage claims that Blockbuster misunderstood the true nature of innovation: He cites economist Joseph Schumpeter who called successful innovation a feat of will, not intellect. Further, he says the company missed the importance of uncomplicated, cheap, and fast experimentation.

Schrage’s thesis in The Innovator’s Hypothesis is that “creative experimentation, with and within constraints, makes high-impact innovation a safer, smarter, simpler, and more successful investment.” Experimentation weeds out otherwise seductive ideas that can’t be implemented, like the plan Blockbuster adopted . It brings to light insights that lead to unanticipated solutions. It also creates a bias for action: When you run an experiment, you’re actually doing something, not just talking about it.

Experimentation weeds out those seductive ideas that can’t be implemented.

Accordingly, half of Schrage’s new book is devoted to an innovation methodology called 5x5 that captures the benefits of experimentation. In the 5x5 approach, writes Schrage, “A minimum of 5 teams of 5 people each are given no more than 5 days to come up with a portfolio of 5 ‘business experiments’ that should take no longer than 5 weeks to run and cost no more than 5,000 euros to conduct. Each experiment should have a business case attached that explains how running the experiment gives tremendous insight into a possible savings of 5 million euros or a 5-million-euro growth opportunity for the firm.”
Schrage says that he’s been facilitating these 5x5 exercises in companies, under the auspices of MIT’s Sloan School of Management and the Moscow School of Management since 2009. The results: “There are always—without exception—at least three or four experiments that make top management sit up straight, their eyes widening (or narrowing, dependent on temperament), and incredulously ask, ‘We can do that!?’”

At a time when fast-track innovation is invariably pegged as a prerequisite of corporate success, 5x5 sounds like it might make a pretty interesting business experiment in and of itself.
Share to:
Topics: innovation, media, stores, success, leaders
Theodore Kinni