Companies are instituting all sorts of health programs aimed at enhancing the quality of life and productivity of their employees, and reducing costs. The other day, for example, a friend showed me her Fitbit—a digital pedometer—provided by her Fortune 500 employer. The company even created a friendly competition around the device that includes healthcare rebates and gift cards for those employees who record a fixed number of steps, and rewards to those who record the most steps. 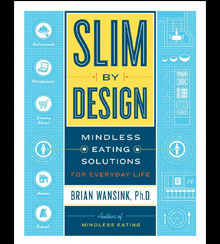 But although these kinds of programs certainly encourage employee fitness and health, Cornell University marketing professor Brian Wansink says that too often “wellness programs are like New Year’s resolutions: They’re enthusiastic and bold, but they never seem to deliver.” The problem, which Wansink explains in Slim by Design: Mindless Eating Solutions for Everyday Life (William Morrow, 2014), is that programs like the one around Fitbit require employees to make a conscious effort to become healthier. As a result, they are easily tripped up by their unconscious behaviors and emotions.

Wansink’s solution, which will sound familiar to readers of cognitive psychologists like Daniel Kahneman and behavioral economists like Dan Ariely, is to make healthy choices the default choices for employees. “Becoming slim by design works better than trying to become slim by willpower,” writes Wansink. “That is, it’s easier to change your eating environment than it is to change your mind.”

That’s why he likes commonsense and easily implementable ideas such as putting free fruit in break rooms instead of donuts; signs that give the number of calories on vending machine choices and loading the least-healthy options in the lowest slots of the machines; and in cafeterias, making salad the standard side dish and offering half-size dessert portions.

These ideas only touch the surface of the many ideas that Slim by Design offers for the workplace, as well as four other “zones that booby-trap most of our eating”—home, restaurants, grocery stores, and school lunchrooms. The basis of these ideas is research that Wansink has conducted over the past quarter-century, most recently at the Cornell University Food and Brand Lab, where he serves as director.

In one of those studies, Wansink and his team discovered that moviegoers not only ate less when snacks were packaged in smaller bags, but that more than half of the subjects said they would willingly pay 20 percent more for the smaller packages. He recalls reporting that counterintuitive finding to a couple of dozen Nabisco executives in 1996, who were “staring at me with their mouths frozen open—like I was Medusa with snakes for hair or like I had just finished yodeling.… Just like in a cartoon, I could see a big collective thought bubble above their heads: ‘SELL LESS AND MAKE MORE?’”

One idea in Slim by Design to improve the health of employees really stood out: Make 10 percent of manager’s pay contingent on improving the health of the employees he or she supervises. “Imagine what would happen if your boss—along with the other managers in your company—were graded, promoted, and paid partly on how she tried to help make you healthier. Again, healthy employees are good for business—fewer sick days, fewer medications, and fewer heart attacks,” says Wansink. “Yet, if even just 10 percent of your manager’s annual salary was based on what she did last year to help improve your health, it would be okay—not weird—for you to sit on a highway-cone-orange exercise-ball chair instead of a black office chair. One-on-one walking meetings would become normal, and desktop lunches might start to look antisocial. You might be thanked when you bring in fruit on your birthday but given the stink eye if you brought two dozen donuts or five pounds of bagels.”

Make 10 percent of a manager’s pay contingent on improving the health of employees.

What would managers think of such a plan? Wansink asked a group of them if they would rather work for a company that tied 10 percent of their evaluations to employee wellness or one that didn’t. The result: 64 percent said that they wanted to work for the former company, believing it to be “a more dynamic, progressive industry leader, with room for more advancement.”

Sounds like a winning scenario to me, unless you’re the employee who brought in those donuts.