Twenty years ago, in 1998, my agent called and asked if I’d be interested in coauthoring a business book aimed at identifying 21 companies that would lead the way in the 21st century. If you know anything about the vagaries of prediction, you can imagine what a lesson in humiliation that gig turned out to be. (Oh, 3Com; oh, Nokia.) But on the plus side, the project introduced me to F. Kenneth Iverson, a highly successful corporate leader who isn’t nearly as well remembered today as he should be — and whose simple and clear directives from the late 20th century resonate clearly in the 21st century.

At the time, Iverson’s memoir/management exposition, Plain Talk: Lessons from a Business Maverick, was newly published. And he was chairman of Nucor Corporation, which, under his leadership, had come from nowhere to run circles around Big Steel and compete head-to-head with heavily subsidized foreign steelmakers. 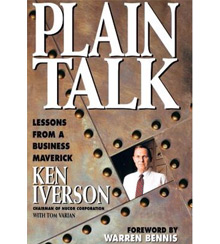 Iverson, born in 1925, revolutionized the steel industry. But that wasn’t his initial intent. In 1965, he was a vice president at Nuclear Corporation of America, a profitless company in which he headed a unit making steel joists. As bankruptcy loomed, the board fired the company’s president and offered Iverson the position. “Apparently, managing the only profitable division in the company made me presidential material,” he recalled in Plain Talk. “Although I was just 39 years old, I wasn’t too flattered. No one else wanted the job. It was mine by default.”

Iverson didn’t waste time formulating a grand or complex strategy. He returned the company to profitability by doubling down on what worked: He focused on steel joists and sold off everything else that was losing money. Neither did he have the luxury of pursuing disruptive innovation. He was too busy trying to make money in a commodity business the old-fashioned way: by reducing costs and driving up productivity.

He also invested, somewhat counterintuitively, in vertical integration. In 1968, when the rising cost of bar steel (the main ingredient in steel joists) started squeezing profits, Iverson decided to make it instead of buy it. Unable to come up with the couple hundred million dollars needed to finance a traditional smelting mill, he latched onto the then-emerging minimill concept, in which electric arc furnaces melt scrap iron to make low-cost steel. By 1970, the minimill, which Iverson built with a US$6 million bank loan, was producing more steel than the steel joist business required and became a profit center in and of itself. In the years that followed, Nuclear Corporation of America was renamed Nucor, and it built more minimills and expanded into steel decking, bolts, and sheet steel.

Iverson abhorred overhead. In 1998, when Nucor’s annual revenue was approaching $4 billion, the company still had only four layers of management. The entire headquarters staff was 22 people working out of spartan rented offices in Charlotte, N.C. “To me, a big headquarters isn’t grand,” Iverson wrote. “It is a waste of money — a gross tribute to some executive’s ego.”

Nucor’s CEO ran lean and drove productivity by pushing authority and accountability out to the division heads, who were given free rein — as long as they delivered a 25 percent return or better on assets employed. “We chose decentralization to gain the innovation, speed, and flexibility that stem from operating like twenty-one smaller companies instead of as a monolithic corporation,” Iverson wrote. “We’re willing to live with the redundancies and ‘inefficiencies’ that go with that choice.”

Mostly, though, Iverson drove up productivity by giving employees a stake in the business and turning them loose. If Nucor did well, so did everyone who worked there; if it didn’t, everyone suffered — workers and managers. The result, reported Iverson in the 1990s: “Our 7,000 employees are the best-paid workers in our industry, yet Nucor has the lowest labor cost per ton of steel produced.”

“To me, a big headquarters isn’t grand. It is a waste of money — a gross tribute to some executive’s ego.”

Iverson credited Nucor’s empowered, entrepreneurial, and egalitarian culture for the lion’s share of the company’s success. He railed against hierarchical inequality: “When I think of the millions of dollars spent by people at the top of the management hierarchy on efforts to motivate people who are continually put down by that hierarchy, I can only shake my head in wonder. What on earth are they thinking? We think you can get a heck of lot further simply by minimizing the distinction between management and any other employee in the company.”

By 1996, when Ken Iverson stepped down as CEO after a 30-year run, Nucor had risen from near bankruptcy to become the third-largest steelmaker in the U.S. But two years later, the ink was barely dry on the pages of Plain Talk when he was pushed off Nucor’s board and into retirement. Within months, his hand-picked successor as CEO, John Correnti, was forced to submit his resignation, too. Maybe that’s a final leadership lesson to be learned from Iverson, who died in 2002. The more value you create, the more others will covet it.