As s+b marks 20 years of publication, we are looking back (and forward) to reflect on the themes, people, and ideas that have animated two decades of original thinking. This is the first in a series of blog posts.

Earlier this year, my wife and I bought a house on the South Carolina coast in a community that has some unconventional street names. We’re on Waterside Drive. But a block away, Waterside meets Mises Street (as in the economist Ludwig von Mises). A little farther down, Mises intersects Prescience Street, which in turns runs into Hayek Street (as in economist Friedrich Von Hayek). I live, metaphorically speaking, at the heart of free-market America, the place where micro- and macroeconomics meet, where ideas and business touch. And that’s the precise conceptual intersection where strategy+business was born 20 years ago.

In 1994, after completing my tenure as the editor of Harvard Business Review, I was approached by Chuck Lucier, a partner at Booz-Allen & Hamilton, who asked if I’d like to work with him on a project he called “the Booz-Allen & Hamilton Journal.” I didn’t know that much about the firm. And, this being 1994, a year before Google’s launch, there wasn’t an easy or fast way to do a search. But I loved the consulting world, which I had covered for the New York Times. I also knew from my time at HBR that consultants were always ravenously hungry for new ideas. And I quickly learned that the people working at Booz had one basic task — solving complex business, government, and technology problems. Lucier and I used that mission to come up with a tag line. I proposed “ideas at work.” Lucier’s version was “ideas that work.”

We decided on a quarterly publishing schedule because we felt four was the minimum number of times a year you could publish something with people remembering it, and it matched up nicely with the seasons. Our target readers were mostly CEOs and business unit heads — the same people who were clients of the firm. Since we wanted to keep the publication in these people’s offices, on their desks, coffee tables, and in their bookcases for as long as possible, we paid a lot of attention to the design, texture, color, paper stock, and logo. We gave the magazine its own name: Strategy & Business. Having a low-key branding relationship with the parent firm allowed us to create a separate identity for the magazine. The only acknowledgment of the owner on the cover was a small logo in white ink at the bottom.

Being a quarterly, we couldn’t use the news to anchor our issues, as many magazines did. And we knew that to capture and hold attention for 13 weeks we would have to consistently hit upon article ideas that would have currency, traction, and freshness when they appeared several months after their initial conception. We knew ahead of time that to succeed we would have to be persistently prescient — on economic and technological trends, on general business topics, and on the way new technologies would affect companies and society. Our job was to discuss the trends we were watching unfold, and provide insight as to where they were likely to lead us.

Rather than rely on our guts, or on anecdotes — as many magazine editors do — we relied on people. Whenever we could, we brought partners, principals, and consultants from the firm into the discussion, sometimes over brown-bag lunches.

Early on, a consultant told me about how Walmart was able to harvest massive amounts of information from its millions of cash registers each day, which enabled it to plan its ordering and manage its inventory and cash with more precision than its competitors. The data could also be applied to a larger scale — helping command Walmart’s vast fleet of trucks and its many cubic miles of warehouse space. That led us to publish one of the first articles on so-called big data. “Make Way for Intelligent Agents,” which came out in October 1995, looked at how automated processes that link artificial intelligence, for example, with intelligent agents put a host of powerful new tools into the hands of analysts and strategists. Some of these tools seemed like they would give analysts greater predictive power with regard to sales and could even help businesses with ordering and pricing. The real power of big data, we suggested 20 years ago, lay in the ability to make sense of it in real time.

Very early in my tenure, I went to Ann Arbor, Mich., to visit C.K. Prahalad. Prahalad had just co-authored (with Gary Hamel) a book called Strategy as Stretch and Leverage, which had attracted a lot of attention. It argued that unless companies were galloping ahead, they were falling behind. While everyone was looking to China as the avatar of emerging markets, Prahalad encouraged us to widen our lens to include his native India. Soon afterward, I traveled to Mumbai to speak at a small business conference at the Oberoi Hotel on Nariman Point. When I arrived, I was amazed to see a huge crowd lining up to get into the hotel’s conference center. These people were not there to hear me. They were there to learn about the Internet boom and how to catch some of its momentum. I knew India was investing heavily in science and technology. But here I saw a huge crowd of people, in this country where per capita GDP was still only about US$500 per year, plunking down $500 to attend an Internet developers’ conference.

While everyone was looking to China as the avatar of emerging markets, Prahalad encouraged us to widen our lens to include his native India.

The rise of India was most certainly a trend I thought we should follow in the magazine, and so we did. I went back to Mumbai to meet Keshub Mahindra, chairman of Mahindra & Mahindra, a manufacturing, electronics, mobile phone, real estate, consulting, and auto parts giant — one of our earliest Thought Leader interviews. I asked “Is there really a new India?” And of course, in 2002, Prahalad and Stuart Hart published the remarkably prescient article, “The Fortune at the Bottom of the Pyramid,” which became the basis for the similarly visionary best-selling book of the same title.

I left Booz, and strategy+business, in 1999, to assume the august position of “global lead partner for thought leadership and innovation” at PwC. When I moved a few blocks across town to PwC’s headquarters, then on 6th Avenue, I saw that the two firms approached problems the same way and both had real respect for ideas. I can’t claim that, back in 1999, I had any great foresight as to how the future of the magazine would develop. But I’m gratified that it has unfolded as it has. Although the techniques and technologies of publishing have been reshaped, the role of publishing remains the same: to get ahead of big ideas, trends, and concepts. Which is why I keep reading strategy+business — online and in print — 20 years later. After all, those of us who choose to live at the intersection of prescience and economics have to keep our eyes and ears open for the next big things. 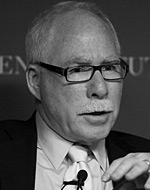 Joel Kurtzman is the founding editor of strategy+business. The author of more than 20 books, he is currently a senior fellow at the Milken Institute and at Wharton’s SEI Center for Advanced Studies in Management. His most recent book is Unleashing the Second American Century: Four Forces for Economic Dominance (PublicAffairs, 2014).