Here’s how I know: A while back, I attended an all-hands strategy+business editorial meeting during which we discussed our coverage of business books, among many other things. I had an idea about our book reviews, and as is my wont, I blurted it out. Everybody liked it. We decided to adopt it. I patted myself on the back (also my wont): Good thinking, Ted! 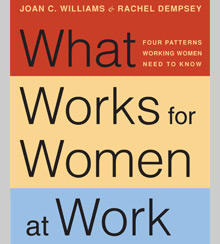 A day later, while considering what needed to done to implement the idea, it dawned on me that I had heard the idea before. Not once, but twice. In each of the previous two all-hands editorial meetings, female members of the team had suggested the exact same idea. I remembered that my reaction had been a distinct “meh” and that their suggestions hadn’t gone anywhere…except to the area of my mind reserved for stolen ideas. (My wife and writing partner believes that this particular area of my brain is extremely well developed.)

As it turns out, there was something more insidious going on than run-of-the-mill intellectual thievery. Joan C. Williams, a professor at the University of California Hastings College of Law, and the founder and director of its Center for WorkLife Law, and her daughter, Yale University School of Law student Rachel Dempsey, find that the “stolen idea” phenomena is related to a common type of gender bias that they call “prove it again!” In their book, What Works for Women at Work: Four Patterns Working Women Need to Know (NYU Press, 2014), they explain that the “prove it again!” pattern requires women to demonstrate their competence repeatedly, far more often than men, because “information about men’s competence has more staying power than equivalent information about women.”

The authors use a 2007 FedEx ad to illustrate the “stolen idea” phenomena. Yes, the ad features men, but Williams and Dempsey report that 68 percent of the “67 women…roughly 40 to 60 years of age and at the top of their fields” interviewed for their book have experienced the same phenomena.

“The stolen idea,” write the authors, “works along two levels: one, feminine women may be less likely to state an idea in a way that commands people’s attention, making it easy to overlook. Two, since the traits consistent with leadership and idea generation are gendered masculine, there’s a better cognitive ‘fit’ for the man’s assertion of a new idea than a woman’s, making it easier for others to pick up on.”

The authors describe three other patterns that are endemic to women at work. The “tightrope” is a no-win situation in which women who behave in feminine ways are marginalized and those who act in masculine ways are dismissed as overly aggressive. The “maternal wall” includes all the negative assumptions about competence and commitment that women encounter when they have children. And the “tug of war” is a bias that is triggered by women discriminating against other women because they disagree about the paths they are following—in Lean In: Women, Work, and the Will to Lead (Knopf, 2013), Sheryl Sandberg mentions the counterproductive feud between Gloria Steinem and Betty Friedan, two leaders of the women’s movement in the 1970s.

Forty years later, gender bias shouldn’t exist in the workplace, but it does, in large part because many of us don’t recognize its most common forms. That’s a pitfall—and for me, at least, a pratfall. Reading What Works for Women would be a good first step in avoiding both. Oh, and regarding the idea I stole, I sent an email to the editorial team about its true origins as soon as I remembered them. (Patting self on back.)