Although their numbers are increasing, women are still far less represented in executive ranks and in business school classrooms than men. They still make less money. And they are subject to tougher standards than their male colleagues.

“Women are judged differently than men,” says one European business school finance professor, who is a woman. “Business schools, especially, are very male environments still. At first you start thinking it’s your personality [that’s causing someone to treat you with less respect than is shown to a male colleague with the same qualifications], but then you realize that women are tested by both male professors and students to prove that they belong there.”

One example she gives is that male students frequently talk over female students in a classroom discussion. “You never — or very rarely — see a male student” getting talked over, she says. 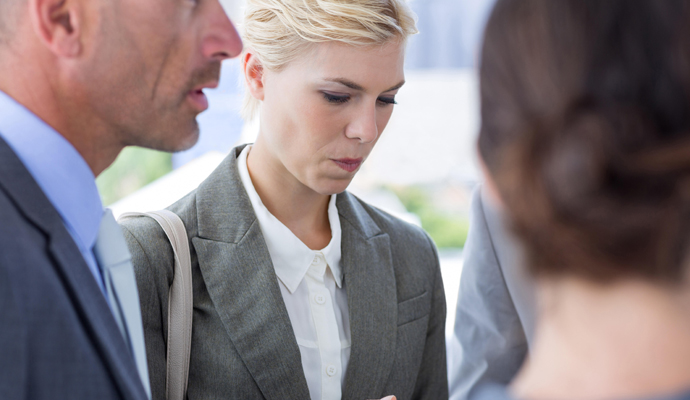 This anecdote also rings true to life after business school. In study after study, working group after working group, the same findings continue to surface: Women are granted less respect than men in the working world. Men often interrupt their female colleagues, even on the U.S. Supreme Court. Further, women’s ideas are ignored in meetings until a man states the same idea, often not consciously, and garners rave reviews. When a man gets a “seat at the table,” the perception is that he has earned a right to be there. But a woman in a position of power will be expected to prove that she deserves to stay.

While addressing the annual meeting of the Women’s Forum for the Economy and Society in Deauville, France, in December, Isabelle Kocher, the recently appointed CEO of French energy giant Engie (formerly Gaz de France), was asked how she was viewed as a CEO in the context of an industry that was considered “macho.” “A few months ago I wouldn’t have said there was much difference because I am a woman as CEO,” she told the audience of some 1,300 people. “But now, I see that everything I decide, everything I do or say, is scrutinized at a level which is without any comparison.”

Under this kind of scrutiny, many women withdraw, performing less well than they might have were they in a more supportive environment. In essence, they behave in exactly the opposite manner of Sheryl Sandberg’s “lean in” advice.

“Women tend to lean back,” says Adrian Dearnell, cofounder and CEO of EuroBusiness Media, a Paris-based communications firm that counts major international companies in its client list. “I see female leaders betraying feelings of their lack of legitimacy all the time: They say things like, ‘Well I’m not sure, but I think maybe…’, whereas a man would say, ‘Here’s what I think.’ This supplicant demeanor just results in giving men more space.”

The Power of Introspection

So how can women learn to push past these hurdles and avoid “leaning back”? One way is to focus on the strengths they have outside the workplace, according to recent research from INSEAD assistant professor of organizational behavior Zoe Kinias. Her work shows that threat-induced gender performance gaps in an international competitive business environment can be mitigated by values affirmations. Put simply, looking inward and putting their core values and strengths on paper can help women surmount barriers to the C-suite.

For the study, Kinias and her colleagues developed a “self-affirmation” exercise in which some MBA students, both males and females, were asked to write about their own personal values, and others about organizational values. The values were then mentioned two times during the term, including just before exams, and the gender gap in grades achieved was assessed for each group. The exercise was found to have reduced male dominance and narrowed the gender performance gap by 89 percent for the group that wrote about their personal values. Additionally, overall performance was improved indirectly through reduced self-doubt, the study found.

“These findings show that [a] stereotype threat [exists] and that a brief personal values writing exercise can dramatically improve women’s performance in competitive environments where they are negatively stereotyped,” Kinias says. “It’s a form of self-affirmation, and a kind of introspection that has powerful application when used to underscore your ability to present yourself.”

In the workplace, women can take advantage of, or campaign for, in-house training and mentoring programs specifically for women. One company having success with a program of separate training to help women break down barriers is UBS Investment Bank. In an industry dominated by alpha males, UBS has set up a “diversity and inclusiveness council” to provide a voice for those who struggle to be heard, with a focus on gender equality.

The council, which focuses on recruitment, retention, and training, is supervised by Isabelle Toledano-Koutsouris, who heads up the firm’s corporate debt capital markets for EMEA in London. The council is run by the business, for the business, not filed away under an HR mandate.

One of the key programs UBS has put in place focuses on unconscious bias, how to address it, and ways to overcome it. “We tend to hire people who look like us,” Toledano-Koutsouris told me in an interview for this post. “We should be focusing on hiring the best, regardless of race, color, or creed. We get this right, and it means better retention because we see from our own statistics that once women are settled in, they tend to stay.”

One of the key programs put in place focuses on unconscious bias, how to address it, and ways to overcome it.

One training, on unconscious bias, uses role-playing and simulation to prepare women to respond expertly to awkward or improper gender-based situations. For example, participating in relationship-building small talk with colleagues following a meeting can be a daunting, says Toledano-Koutsouris. “Men walk maybe twice as fast as women. So it’s hard to be part of that conversation when you’re running after them.” Other scenarios: When you’re (jokingly or not) asked to bring coffee to a meeting, or when you’re ignored as the boss.

“Comments meant as a joke still have consequences for those at the receiving end. Often those asking for the coffee or making the quip aren’t aware of the impact. That is what we are trying to address in these sessions. There’s no one-solution-fits-all; it is about raising awareness and having everyone take responsibility for their actions and comments, no matter how lighthearted.… It is about providing context so that when these things happen, they don’t break you.”

The council also holds monthly mentoring sessions especially for women. Mentors and mentees discuss career strategies and challenges specific to women executives. Less frequently, a sponsor — an executive not involved in the daily workload — can advocate for their colleagues in career advancement opportunities. “The old-time ‘men’s club’ within the business tended to do this,” Toledano-Koutsouris points out, “but there were no women in that club. We’re trying to address that.”

Although banks tend to measure everything, training of this sort can defy classical measurement. After three years, the program is proving successful in terms of satisfaction and talent retention, according to Toledano-Koutsouris. “Sometimes,” she says, “if it feels right, we have to do it.”

Equal opportunity for women in the workplace is no longer a question of having the same qualifications as men; it is more about the application of those qualifications. Without specific outside training, some women may never get to contribute their best. And everyone suffers.