The HealthCare.gov team keeps sending me emails. The March 31 application deadline for coverage in 2014 is fast approaching and they’re concerned: “Millions of Americans are already benefiting from the quality, affordable health coverage available to them through the Marketplace. We want to make sure you join them.”

I appreciate that. Really. I can’t remember a time in the past 20 years when our health insurer has expressed any interest in whether my wife and I had quality, affordable coverage. Instead, it sent us annual rate increases—usually 15 to 20 percent—accompanied by a generally incomprehensible policy. Every three to four years, as the cost of our policy made the draconian risks of self-insuring start to look good, my wife renegotiated it—that is, she reduced our coverage until it reached a level that we could afford. 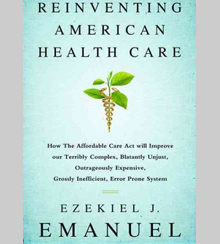 Of course, I was gung ho about healthcare reform. For years, I happily anticipated the competitively priced insurance that would be available on the government-run exchanges. In good humor, I waited out the silly death-panel debates and the heroic debugging of HealthCare.gov. And then, finally, I gleefully registered and followed the simple instructions to get my quote. The payoff? Higher deductibles and less comprehensive coverage at a cost approximately US$100 per month more than our existing policy. D’oh!

This is a long-winded explanation for why I wasn’t particularly thrilled to receive an advance copy of the long-titled Reinventing American Health Care: How the Affordable Care Act Will Improve Our Terribly Complex, Blatantly Unjust, Outrageously Expensive, Grossly Inefficient, Error Prone System (Public Affairs, 2014), by Ezekiel J. Emmanuel. The author was a beacon of sanity throughout the battle over reform. He is the chair of the Department of Medical Ethics and Health Policy at the University of Pennsylvania and served as a special advisor for health policy to the director of the White House Office of Management and Budget for a couple years.

In his new book, Emanuel does what he does best—clearly and logically explains the U.S. healthcare system. In doing so, he reprises many of the promises that he and other reform advocates have made before in the guise of six “megatrends.”

• The Affordable Care Act (ACA) will force a radical restructuring of the insurance industry as providers and payors integrate, and markets become more competitive.

• The chronically and mentally ill will get better care.

• The demand for highly expensive acute care will fall.

• Changes in medical education will eliminate the shortage of health professionals.

Theoretically, this prescription is just what the doctor ordered. The only problem is that Emanuel’s megatrends are predications about the future, and as he says, “Making predictions is highly risky.” The reality, which Reinventing American Health Care does not shirk, is that the ACA will not deliver the above benefits until sometime between 2020 and 2025 —and there are many ways in which it can go off the rails between now and then.

The reality is that the ACA will not deliver benefits until sometime between 2020 and 2025.

So, it turns out that quality, affordable healthcare is still quite a ways away for me and my wife. In the meantime, our insurer says that our policy is going to get cancelled next year because it supposedly doesn’t conform to the standards mandated by the ACA, and our choices on HealthCare.gov are significantly more expensive than the $1200 per month we’re paying now. Good thing we dodged the socialized medicine bullet.