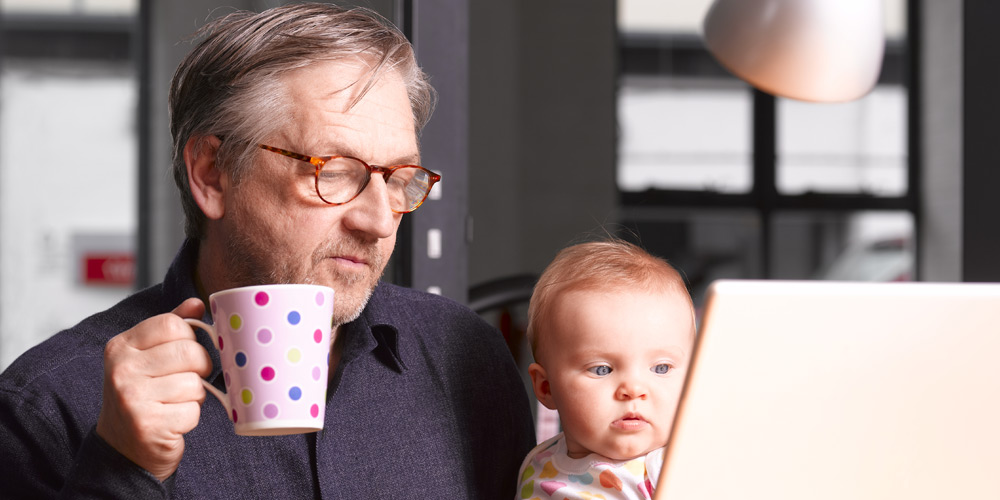 After he became a grandfather, Ivan Axelrod, the COO of a financial management company, decided he wanted to spend one day caring for his grandchildren each week. So he switched to a four-day workweek — and took no pay cut. “My father passed away when both my children were very young, and they don’t have any memories of their grandparents. I didn’t want that to happen [with my grandchildren],” Ivan told me in an interview for my book, All In, “so I worked out an arrangement with my partners.”

Some of his colleagues at Provident Financial Management, a company with four U.S. offices that specializes in the entertainment industry, feared the business would suffer as a result. It didn’t. And Ivan is far from the only one to successfully strike this balance. In fact, he wasn’t even the only member of his extended family to take the grandkids once a week. Two other grandparents took one day each, as well.

Though Ivan was able to keep his job while helping to take care of his grandchildren, other grandparents often aren’t. The New York Times has reported that because many businesses don’t provide schedule flexibility, some grandparents are switching to jobs with lower pay and fewer benefits so they can care for grandchildren. And it isn’t always a matter of choice. An estimated 3 million Americans are raising their grandchildren themselves, stepping in when their own children couldn’t meet the responsibilities of parenting. In many instances, this situation is a result of the opioid crisis.

Regardless of the cause, the phenomenon is reshaping workplaces — and presenting a challenge that businesses should address in order to better attract and retain a potential workforce of millions of older employees.

In 2018, researchers found that about half of young children in the United States spent at least some time with their grandparents each week. In most countries, including the U.S., grandmothers do more of the caregiving than grandfathers. But a 2012 study has shown that in Norway, “the grandfather usually takes the lead” after age 70. (Together with its regional neighbors Iceland and Finland, Norway ranks as one of the most gender-equal nations in the world, according to the World Economic Forum.)

When businesses take the necessary steps to help working grandparents balance career with caregiving, they also help tackle some of the biggest challenges facing the workforce today.

Many businesses pay lip service to the idea of a flexible schedule but fail to support it in practice. In my work with companies, I find that the kind of culture change necessary to achieve workplace flexibility must happen from the top down, with executives first adopting their own alternate schedules.

The C-suite generally skews older than the rest of a company’s workforce. So although executives may not have young children at home, many do have young grandchildren. And when they take the time to provide care and adjust their schedules, they show the entire company that it’s possible.

Ivan’s experience proved this. After he showed how well flexibility worked for him and his family, others at the company — often younger workers caring for their children — began to make similar changes to their own schedules.

There are two prominent ways in which decisions such as Ivan’s boost gender equality.

When businesses help working grandparents balance career with caregiving, they also help tackle some of the biggest challenges facing the workforce today.

First, when a male executive makes this kind of change, it helps tackle the “flexibility stigma.” This stigma derives from the set of perceptions that sometimes surround alternate work arrangements. It can penalize those who pursue such arrangements, and it’s an especially strong impediment to men taking time for caregiving. Some men have been fired or demoted for seeking flexibility.

And second, when grandparents are able to handle some of the caregiving, they help parents — particularly mothers — stay in the workforce. The same financial and cultural pressures that prevent men from achieving career flexibility also push women into doing far more of the caregiving. As a result, many women drop out of the workforce altogether.

The Atlantic has reported that in China, the frequency with which grandparents — particularly grandmothers — serve as caregivers has helped fuel growth in the number of women in senior management roles and swell the ranks of self-made woman billionaires.

Businesses should assure that work–life balance (or integration, if you prefer) initiatives are available to all employees, not just parents. They should be willing to experiment with letting employees work remotely and at different hours, and maybe even join the list of companies that are trying out a four-day workweek.

Families are increasingly relying on workers to build the kind of arrangements that Ivan did. After all, his success at work pales in comparison to what he gets from spending time with his grandchildren. “It gives me tremendous satisfaction to think of the bond we have between us,” he told me. “I know that’s there forever.”