It has long been an iconic U.S. industrial sector. It used to employ a very large proportion of the workforce — especially in the Midwest — and provide wages to people without advanced education. But over the decades, thanks to technology and modernization, employment has fallen persistently. In good years and bad, through war and peace, expansion and recession, the industry has slashed millions of jobs. Time was, virtually everybody either worked in this industry or knew somebody who did. But now? Probably only about 2 percent of workers toil in this sector.

Is this another tale of decline? 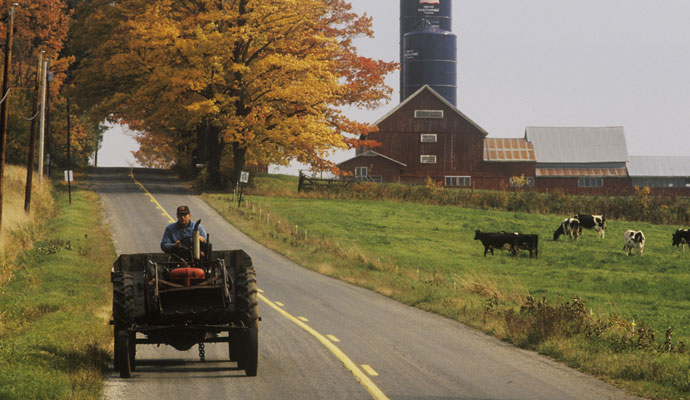 Last week, we noted an apparent contradiction: The U.S. manufacturing sector produces near-record amounts of materials, measured by the dollar value of output, but employs far fewer people than it did several decades ago. This dichotomy is even more pronounced in agriculture. But the difference is that, on both a global and national basis, people tend to regard U.S. agriculture as an extremely healthy, world-beating sector: highly industrialized, remarkably efficient, an exporter that feeds the world.

It’s little appreciated now, but the U.S. was, for its first century, essentially an agricultural economy. (Hat-tip to an s+b reader for directing me to these great very long-run charts.) In the 19th century, well over 50 percent of the workforce labored on the farm. Yes, there were machines: the cotton gin, the thresher, the first tractors. But by and large, at the start of the 20th century, the U.S. needed a lot of people to farm a lot of land. In 1900, about 40 percent of the U.S. workforce toiled on farms. And you didn’t need a lot of education to qualify for these positions. (Less than 10 percent of the U.S. population had graduated high school.)

With each passing year of the 20th century, farming made significant leaps in efficiency. There was greater use of machinery and technology — tractors, combines, crop-dusters. But the industry also developed more effective seeds, irrigation techniques, fertilizers and pesticides, and the logistics that made all the products move around the country efficiently. Farming became industrialized.

So, yes, employment fell sharply. The estimated percentage of the labor force engaged in agriculture (pdf) fell from 41 percent in 1900 to 21.5 percent in 1930, to 4 percent in 1970, and to a mere 1.9 percent in 2000. The decline of agricultural employment has been vast in real terms as well. It peaked at about 12 million in 1920, and shed about two-thirds of the total over the next several decades.

But the increase in output has been immense. And although the cultivation of fruits and vegetables remains quite labor-intensive, that isn’t the case for other crops. In recent years, I’ve visited a farm in North Dakota, where a farmer and a handful of workers managed a few thousand acres of soybean and grain crops, and I’ve spent time on a dairy farm in upstate New York where a half-dozen people (and a bunch of equipment and machines) handled the milking, feeding, and monitoring of several hundred cows.

This chart shows productivity on farms since 1948. Thanks to greater efficiency and economies of scale, the U.S. Agriculture Department notes, “Even as the amount of land and labor inputs used in farming declined, total farm output more than doubled between 1948 and 2013.” Agriculture and agriculture-related industries accounted for US$385 billion in economic activity in 2014.

I’ve visited a farm in North Dakota, where a farmer and a handful of workers managed a few thousand acres of soybean and grain crops.

And because the U.S. agricultural industry is so efficient — producing so much at such low prices — it is an exporting force. Agricultural exports have generally hovered at about $100 billion a year, as this chart shows, and were $133 billion in 2015. The U.S. has a chronic and large trade deficit, but in every year since 2000 it has had a trade surplus in agricultural products; it was nearly $20 billion last year.

First, many manufacturing jobs have been lost because existing factories have become more efficient and hence need fewer people. But many have also been lost because labor costs and other factors means it no longer makes economic sense to make things like television, or lightbulbs, or T-shirts in the United States. That’s explicitly not the case with agricultural products — precisely because of all the automation, technology, and infrastructure, the U.S. agriculture industry is far more competitive than that of many countries in the world where labor costs are far lower.

Second, to a large degree, historians note that agricultural workers were liberated from farm work by technology and machinery. Toiling on farms was tough, seasonal work, which generally didn’t pay that well and offered poor security and few opportunities for advancement. A century ago, many of the workers rendered redundant by industrialized farms were able to find better paying jobs, with better working conditions and benefits — in factories, or stores, or schools. But in recent decades, many of the manufacturing workers displaced haven’t had the same luck. Often, they have been forced to trade down to lower-paying service jobs in which wages and benefits aren’t as robust.

Futurists warn that in coming decades, machines will start doing many of the jobs that humans have been doing for centuries. That process has already happened in what, for most of humanity’s history, has been the world’s largest industry.