As s+b marks 20 years of publication, we are looking back (and forward) to reflect on the themes, people, and ideas that have animated two decades of original thinking. This is the fifth in a series of blog posts.

In many ways, editing a quarterly magazine is a high-wire act. Four times a year, you place your intellectual bets in a highly public manner. Latch onto a trend before it becomes common, and you look like a genius. Run a story a few months after a fad has crested, and you look like a laggard.

Over the past 20 years, we at strategy+business have shown an admirable ability to be prescient, when it comes to analyzing the trends, technologies, forces, and ideas affecting global business.

Occasionally, however, we have gotten it wrong. It’s easy to get caught up in trends that, upon further reflection, induce cringes. (Who among us born before 1968 does not have a 1970s-era photo of himself wearing bell-bottom jeans?) Like all humans, magazine editors are prone to making occasional lapses in judgment, and to being victims of poor timing. In rare instances, we are susceptible to frauds.

Like all humans, magazine editors are prone to making occasional lapses in judgment.

In politics it’s now routine to see pollsters and pundits who have track records for the wrong call on election results continuing to pontificate on television every week. But it’s different in business. If you call for a market crash that never comes, or advocate strategies that don’t work, you will find that your services are not in high demand. Which is why we in the business press tend to let our errors lie. But it is important to look back — with curiosity in addition to regret. There is a large and growing body of literature that urges us to take pains to learn from those who get it wrong. In Silicon Valley, failing fast and then moving on to the next opportunity has become a best practice of sorts for startups.

With that in mind, I scoured our archives for those few rare instances where we missed the mark — and looked for some lessons.

“And the New Economy Winner Is...Europe,” published in the spring of 2001, was a paean to the power of a powerful, rational economic structure developing. “The European union is emerging as a formidable competitor among world economies, thanks to an aptitude for cross-border management and an ease with cultural diversity.” With its single market and common currency, Europe would only become more efficient and economically functional. One of Europe’s virtues, according to the U.S., was a greater sense of community and solidarity.

Whoops. Within six years, Europe would plunge into a series of crises — the near-bankruptcies of several countries, the bailouts — that would ensure a lost decade. Why? It turns out that a well-designed, comfortable suit that fit perfectly during placid times turned out to be a straitjacket in a time of crisis. The financial crisis exposed the unresolved, obvious conflicts at the core of Europe — one monetary policy controlling the fiscal policies of two dozen countries, an inflexible currency, and a lack of solidarity among the members. In retrospect, the optimism surrounding Europe’s prospects should be a reminder to editors (and investors) that you should always stress test a thesis against the prospect of imaginable calamities, however remote they might seem.

In other instances, being wrong is simply a matter of bad luck. You can be entirely right about the big picture but simply choose the wrong exemplar. An article in 2005 forecasting that social media networks would provide a platform for publishing and advertising would have seemed horribly off if MySpace was its defining example; it would have been regarded as brilliant had it relied instead on YouTube. In the summer of 2003, we published an excellent case study on the topic of corporate boards. “Delphi Reinvents Corporate Governance” described how the CEO of the auto parts giant, which had been spun off from General Motors in 1999, was determined to “forge a new management and governance culture.” This board would be more engaged in strategy and help develop new markets. Instead of being stocked with ex-politicians and other worthies, it had executives from German and Japanese automakers, and from the technology industry. It was, we noted, a “textbook study of the board as resource.” But Delphi’s problem, it turned out, was something that no amount of good governance or sage advice could solve. It was essentially dependent on a single customer (GM), which demanded very tough terms, and was unable to grapple with rising commodity, labor, and health care costs. Delphi filed for bankruptcy in September 2005. The takeaway here is that you have to keep your eyes focused on the big picture even as you drill down.

If there’s one piece we would like to be able to go back and not do, it would be the article that ran in the first quarter of 2001 entitled “Beyond the Cult of the CEO: Building Institutional Leadership.” The article examined a few high-performing companies and described how “many key leadership tasks are institutionalized in organizational systems, practices, and culture.” It continued:  “To an unusual degree, these companies are rich in leadership — men and women who take ownership-like responsibility for financial performance and managing risk.”

One of these preeminent companies was Enron, the Houston-based energy giant identified as “one of the fastest-growing, most entrepreneurial corporations in the world.” The article quoted the company’s CEO, Kenneth Lay, and its president, Jeff Skilling. It praised the decentralized model that empowers people to make decisions. Enron, we learned, carefully recruited people, allowed them to move through the organization, and afforded them the freedom to fail — if people took the right kind of risks. Of course, within a matter of months, we learned that Enron was an extremely poorly managed place where people took precisely the wrong kinds of risks. When it went bust, amid allegations of shady accounting and puffed-up profits, Enron emerged as a poster child for bad institutional leadership.

The lesson: Whether you’re an investor or an editor, if a story seems too good to be true, it just may be.

How the Fed came through the pandemic
An account of Jay Powell’s tenure as chair of the US Federal Reserve details a transformation from lender of last resort to the backup lender to the entire world.
by Mike Jakeman 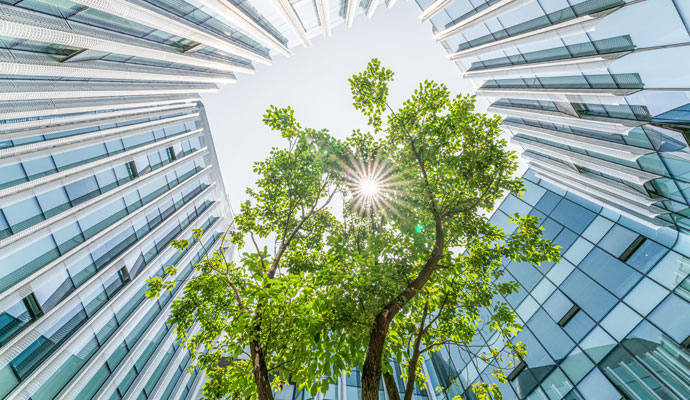 How environmental, social, and governance reporting grew up
It’s a coming-of-age story that will change the way businesses operate.
by Denise Young
Digital issue