It took Charles Horton, a Dallas-based businessman, years before he managed to build up the courage to walk over hot coals. A longtime fan of team-building exercises, he knew how empowering it was supposed to be — but he just kept chickening out. When he finally did it, he cried. “It was so moving for me.… I had made it such a big thing for so many years,” he said. “I believe now that my mind is more powerful than I thought it was.” A serial entrepreneur, he has become a certified firewalking instructor and runs a company that facilitates firewalks for people who want a team-building exercise that’s a bit different.

Corporations, inspired by motivational guru Tolly Burkan, who pitched firewalking as a metaphor for achieving the seemingly impossible, have used the challenging activity to “unleash” their employees’ potential since the 1980s. Firewalking has since been joined by an increasing number of “extreme” team-building exercises, including glass-walking, board-breaking, and, even more recently, Lego-walking. But it’s only recently that scientists have begun to examine just what makes these exercises work, exploring how shared adverse or painful experiences can bond groups of people, even strangers, together quickly. 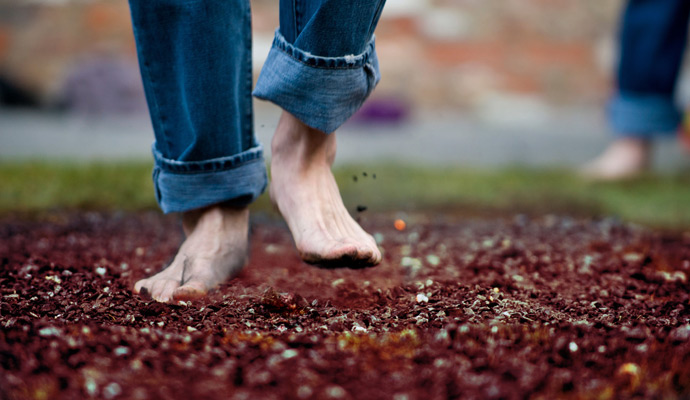 A little pain, it appears, goes a long way in promoting what’s called prosociality, behavior that fosters social trust, inclusion, and good feelings — all the kinds of things that make workplaces tick. It might even, some researchers argue, make teams more cooperative and creative.

Before we get in to why, let’s be clear. These exercises aren’t usually painful, they just seem painful (except Lego-walking, which hurts). That’s important. Take firewalking. As Scott Bell, a two-time firewalking world record holder and part-owner of UK Firewalk, a Manchester-based company that organizes and leads firewalking events, explained, hardwood is burned down to its coals and, though the coals are incredibly hot — 500 degrees Celsius — they are also very slow conductors of heat. Burns can and do still happen, but walking over the hot coals successfully has to do with how quickly you move (don’t stop to take a selfie).

The people on the sidelines can feel the heat coming off those coals, and the anticipation can be terrifying, as it was for Horton. It feels like a challenge — and it’s this precise combination of fear and ease that makes the exercise work. On an individual level, as Horton found, the sense of triumph can be transformational; on a group level, Bell said, it’s about overcoming a challenge with team support.

Studies have demonstrated that the perceived pain and challenge of these exercises is a significant part of how they promote bonding. In 2014, psychologists in Australia, led by Brock Bastian, found that (pdf) shared painful experiences can solidify social bonds, and can even create trust among people who don’t know one another at all. One experiment asked groups of strangers to plunge their hands in ice water, hold a series of leg squats, and eat hot chili peppers; groups that shared painful challenges exhibited increased cooperation during an economic game involving group payoffs for individual decisions, compared to a control group that didn’t.

In November 2018, Bastian and fellow researchers published a second study that examined how this phenomenon affects creativity in a team setting. In experiments again using hot chilies and leg squats, they demonstrated that “sharing an adverse (vs. non-adverse) experience leads to increased supportive interactions between team members and this in turn boosts creativity within a novel [newly created] team.” The researchers added, “There is a current trend toward making office environments fun and comfortable, and team building exercises revolve around sharing in positive rewards. There are clearly benefits to these approaches, but our work suggests that aversive experiences may be an important, yet frequently overlooked, avenue for achieving similar ends.”

Other research demonstrates how adverse experiences can underscore meaning for individuals participating in them. In 2013, researchers at the University of Warwick in the U.K. and Princeton University in the U.S. found people donated more to charity when they thought they’d have to suffer to do it — running five miles, for example — leading them to conclude that the challenge made people ascribe more significance to the act. Remember all those videos of people dumping ice water on their heads for ALS research?

Part of what’s happening in these activities is certainly physical. When we’re in a “high arousal state” of stress, fear, anticipation, and anxiety, our bodies are awash with neurotransmitters and hormones, including dopamine, oxytocin, and vasopressin. These have been linked to feelings of trust in those around you, reducing fear, and increasing empathy, and it seems to follow that extreme team-building exercises that tap into these reactions can promote extreme group bonding.

But there’s another layer: These exercises also work because when groups feel threatened, their internal social bonds are reinforced. In Bastian’s 2018 study, researchers suggested that “shared experiences may promote an exclusive focus on the in-group and foster selective social integration and support.” Harnessed in the right way, this can be a positive.

Forcing employees to hold leg squats or eat hot chilies is usually frowned on in a work setting, which is why exercises like firewalking or glass-walking can be useful substitutes for actual pain; they can trigger the prosocial effects without the potential for injury. And that’s the point: The benefits of prosocial office environments cannot be oversold, as Kevin Daniels, a professor of organizational behavior at the University of East Anglia has explained. “Where people are more satisfied with their jobs and happier at work, they are more likely to perform better, and organisations that are more likely to invest in policies and practices that boost wellbeing tend to perform better, including the share price,” he told me, adding that companies with strong identities tend to be more resilient.

Bonding and resilience can come out of an “extreme” team-building exercise, when they’re done right with everyone on board, as Daniel’s 2017 research shows. “What you’re trying to do is create an identity or bond, and that you wouldn’t get from a couple of days canoeing,” said Daniels. But you might try starting with an afternoon’s firewalking.