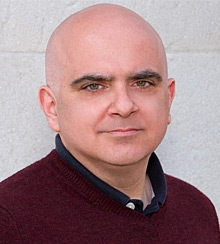 When he was invited to judge a conference for aspiring entrepreneurs in Dubai in November 2010, Christopher Schroeder was admittedly skeptical. “I couldn’t get it through my head that politically and socially hierarchical places like (then)Mubarak’s Egypt were kicking up a technology ecosystem,” he said. “But my world view completely changed after the event.”

In fact, the Washington, DC–based Internet entrepreneur and venture capitalist was so impressed by what he witnessed—more than 2,000 young, tech-savvy men and women from North Africa to Yemen participating with smartphones in hand and big ideas in mind—that he spent the next three years interviewing hundreds of entrepreneurs and investors in the Middle East to better understand their aspirations, motivations, and innovations. Schroeder’s research culminated in his first book, Startup Rising: The Entrepreneurial Revolution Remaking the Middle East (Palgrave Macmillan, 2013). And today, he’s convinced that what’s happening in the Middle East is just the beginning of a tech-enabled, “bottom-up revolution” that will soon disrupt traditional business practices everywhere.

Schroeder recently sat down with strategy+business to discuss innovation in the Middle East and why he thinks leaders around the world continue to underestimate the power of mobile technology.

S+B: What makes the Middle East ripe for innovation?
SCHROEDER: An entrepreneurial spirit has long been there. Dubai was a desert 17 years ago, and somebody willed that city to happen. But the biggest difference today is the ubiquitous access to software and technology. The spread of broadband, increasingly through smartphones, has already begun to change everything, and it will only accelerate over the next five years.

S+B: How so?
SCHROEDER: Most mobile providers expect at least 50 percent smartphone penetration in the region. The Gulf has already exceeded this level. So we’re not just talking about better phones, and more of them, but literally supercomputers in the hands of millions. This means that millions of people can see how millions of other people live. They can connect with anybody anywhere and collaborate instantly.

I think people are underestimating the fact that the entire world soon will have access to essentially all of human knowledge at their fingertips. Really, what’s happening is that we’re unleashing a complete revolution in bottom-up human behavior. The essence of empowerment is the ability to feel that you’re not afraid, and that you’re not alone. If someone like you does something really cool, you start to believe you can do it too. Then you have a flywheel effect of people doing amazing things.

S+B: What do you mean by a revolution in “bottom-up” behavior?
SCHROEDER: There’s a line in my book from an Egyptian woman, Dina Sherif, who’s a corporate social responsibility expert. She said it never ceases to amaze her how well-intentioned, top-down institutions—like governments and big businesses—think that they, sitting in Washington or in London, have the best idea of what’s good for people on the ground in their markets.

But all of a sudden, with technology, people everywhere have a voice. We have access to what people all over the world are actually doing, what they’re capable of accomplishing, what works, and what doesn’t work. Given the opportunity, people can often solve the problems in their backyard better than anyone else can. So to play out Dina’s phrase, she said a top-down view sees people as problems, while a bottom-up view sees people as assets who can solve their own problems.

S+B: How are companies capitalizing on this bottom-up phenomenon?
SCHROEDER: First, I’d argue that technology capabilities that connect us—like Google, Facebook, Twitter, texting, and so on—are the ultimate facilitation platforms. With Google, almost anybody anywhere can find orderly access to the world’s knowledge. And through Facebook and Twitter, almost anybody anywhere can connect with others under almost any circumstance.

Many entrepreneurs in the Middle East now, in these early days of technological innovation, are improvisers or problem solvers doing things that are specific to their region. But I believe that at some point soon, we’re going to be surprised by how global they become.

I’d pay attention to May Habib’s Qordoba, a translation platform that allows people to work from home on a part-time basis. It has a huge growth opportunity because only about 1 percent of content online is currently in Arabic. As an investor, I think Souq.com (effectively the Amazon of the region) is going to be a juggernaut. The founder and CEO, Ronaldo Mouchawar, is an amazing salesperson and a great culture builder, and he has executed well. And I’ve also seen some interesting ideas in mobile payments; I’d expect to see increasingly frictionless transactions through devices.

S+B: How important are “big data” and social media for growth?
SCHROEDER: I think the ability to understand in aggregate and at highly specific levels what people are doing, thinking, and caring about is a massive challenge that is now more digestible through data. And the more responsive any institution is to what people are really doing, as opposed to what we think they’re doing, increases their opportunity to engage the bottom-up phenomenon. As Alyse Nelson, the CEO of Vital Voices (a global women’s support and empowerment organization), says in my book, social networks, particularly via mobile devices, are dramatically shifting power dynamics. Real influence can come as much from a Twitter account as from the corner office.

Often—not always, but often—traditionally top-down institutions have tremendous difficulty understanding and embracing the power of these new tools to engage from the bottom up.

But for large corporations, there’s an unbelievable opportunity—if they’re willing to enter a world of coauthorship and understand that everyone brings something to the table. Over the next 10 years, these tools will foster innovation and create significant new markets. There’s a reason smart companies like Vodafone Egypt are partnering with and even investing in startups in their backyard. They want to learn.

S+B: What can multinationals and governments do to encourage innovation in emerging markets?
SCHROEDER: Anything that helps maximize the movement of people, goods, and ideas.

Although so much of the entrepreneurial ecosystem is happening naturally from the bottom up, a top-down structure is very important when it comes to areas like infrastructure, the rule of law, and education. As one positive example, the president of Rwanda, Paul Kagame, recently said that everyone in his country is going to have access to LTE within the next two or three years. Not 3G, not 4G; they’re going to leapfrog to the fastest broadband. They’re wiring the entire country—and bringing in a company from South Korea to help them do it. The president is totally committed. He wants to get a tablet in every child’s hand in that period of time, and the government has already given out more than 150,000 tablets, along with training, to young people. So if that can happen there, it can potentially happen anywhere.

And with increasing access to mobile technology, a real awakening is happening. Young people are saying, “I can do stuff that my parents told me I couldn’t, and I can stand toe-to-toe with anybody in the world.” This brings with it a sense of tenacity, an utter commitment that comes with great entrepreneurs everywhere. This is the transition that’s happening in the Middle East and other emerging markets now.

S+B: What else do business leaders need to understand about the increasingly mobile-driven global economy?
SCHROEDER: Ben Horowitz, the cofounder of Andreessen Horowitz, the venture capital firm, often talks about courage, and he doesn’t just mean bravery. He means an assuredness—not an arrogance, but an assuredness; being willing to walk through walls to make an idea happen. You can usually tell whether an entrepreneur has it within 15 minutes of meeting him or her.

That’s important because most “overnight” successes don’t happen overnight. They might take eight years. As I once heard the great entrepreneur David Bradley say: Life isn’t an arrow; it’s a sine wave. So what really matters for most of us, as human beings and as businesspeople, is, what are you like in the low end of a sine?

Everyone loves you when you’re at the top. You’re a hero, you’re smarter than everybody else, and people talk about you in powerful ways. When you’re down in the low end, everyone thinks you’re an idiot, and your employees may be questioning your leadership.

But you learn a lot about yourself and other people when you’re in the low end. If you know it won’t be forever, if you know you’ll get to your goal eventually, and here’s how you’ll figure it out, that’s fantastic. Successful people don’t doubt that they have the ability to change the world. But they should remember that the journey’s going to be an incredibly, shockingly bumpy one.

Success, and leadership more broadly, is about having the kind of courage that comes from a raw desire to make something happen that was not there before—and wanting it in your teeth. If you have that, the rest tends to take care of itself. This is true around the globe.

Topics: startups, training, success, innovation, multinationals
Get s+b's award-winning newsletter delivered to your inbox. Sign up No, thanks