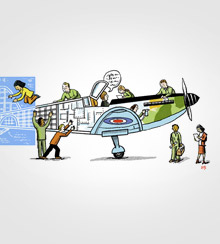 Industrial companies are often perceived as lumbering giants that have difficulty responding to competitive pressures and capitalizing on market trends. Design cycles can last years—not just for developing new products but also for upgrades to the existing portfolio.

Why are many industrial manufacturers so sluggish? In my experience, these companies have traditionally relied on a top-down, linear process that moves projects through design gates, also called stage gates. For senior management, it’s a comfortable way of doing things, making it easy to track progress and maintain control. However, this approach has significant downsides. It is often slow and bureaucratic, and its mechanical nature can stifle creativity. And at its best, innovation is an organic process; too much planning and control may lead to sub-optimal solutions.

Fortunately, there’s a better way. When industrial companies need to make changes in product cost or design more rapidly than traditional methods will allow, they can take a page from the fast-moving world of software design and adopt a sprint-and-scrum approach. This iterative process relies on short cycles involving rapid design evolution and revision. The sprint is a period of concentrated effort, such as engineering or coding a module, by individuals or small teams. At the end of each sprint, stakeholders from the key functions come together for the scrum, where they review progress and clarify goals for the next sprint. The intense nature helps to bring the organization together toward a common goal, and avoids the tedium that can set in with a long stage-gate process.

Leaders of industrial companies might worry that this approach won’t suit their complex needs. But a review of recent history shows that sprint and scrum predates the software industry, and has been used to develop many of the most complicated designs in human history.

Sprint and scrum has been used to develop many of the most complicated designs in human history.

A More Agile Past

The industrial and defense companies of yesteryear pulled off incredible feats of design without many of today’s accelerative technologies. Take the Supermarine Spitfire, which was the main Royal Air Force fighter aircraft during World War II. At the outset of the war, the British realized that to be successful in the Atlantic theater, the aircraft would need significant improvements. Between 1936 and 1945, it changed engines, its loaded weight doubled, and its maximum speed increased by 90 miles per hour. The rapid evolution of the plane was possible only because of its iterative design and testing approach.

Jump ahead a few years, to the start of the Cold War. Andrei Sakharov began designing the first Soviet thermonuclear device in 1949. After the device failed early performance tests, Sakharov and his team made two quick design iterations, resulting in “Sakharov’s Third Idea,” which led to a successful detonation in November 1955. The entire design cycle with three iterations was completed in only six years.

In the United States, meanwhile, the Saturn V rocket program started in 1961 with the seemingly impossible goal of putting a man on the moon by the end of the decade. To meet the timeline, the rocket’s three stages and instrument unit were developed in parallel by four companies, each of which further compressed schedules by using parallel testing and development. Saturn V rockets were ready for use as part of the Apollo lunar missions just eight years later.

People may argue that the speed of such efforts was possible only because of enormous budgets and the sense of urgency imparted by war or bold presidential decree. And it’s a valid point: Over the last 1,000 years, large-scale warfare has proven itself time and again to be the single biggest catalyst for economic and technological innovation. But a closer look reveals that the decision to iterate these projects quickly and decisively—essentially, to sprint and scrum—was what largely enabled their success.

Moreover, there are many examples of companies leveraging this approach without such encouragement. For example, consider the development of Apple’s computer platform. In 1976, the Apple I debuted as a make-it-yourself computer kit, which by 1977 became the Apple II, which in various forms competed through the mid-1980s with the likes of IBM’s personal computers. Were Apple designers encumbered by a lengthy stage-gate process when they were fighting for their company? No, they were fast and nimble, and reaped the benefits of that approach.

Picking Up the Pace

Despite these examples, taking a sprint-and-scrum approach will bring most industrial manufacturers into uncharted waters. But I’ve seen firsthand how effectively the process can accelerate design and lead to better results. It reveals risks early on, it minimizes project management overhead, and most importantly, it energizes staff by showcasing achievements and fostering open communication.

Recently, a leading railcar manufacturer was under intense pressure to reduce its cost base. The company had lost a series of high-profile project bids—primarily owing to the price of its equipment—and it had another bid due in just eight weeks. It decided to launch a design-to-cost (DTC) effort to reduce costs by more than 10 percent before the deadline. With such a demanding time frame, management knew that the existing design processes weren’t up to the task; it might take eight weeks just to align the resources and set up the schedule.

The solution was to employ a sprint-and-scrum design method. The working team divided the rail system into six subsystems, and it created working teams of designers, engineers, and sourcing staff. During sprints, the teams would redesign components or processes, or research supply options. The scrums, which happened as frequently as every three days, provided a forum that brought everyone together to collaboratively refine estimates and monitor progress.

Through intense design effort, the team implemented major changes, including redesigning the car frame, substituting internal and external cladding materials, and redesigning the electrical harnessing. Changes went beyond design, as the team investigated ways to optimize manufacturing processes and improve sourcing strategies. Because of the data-driven approach taken throughout the effort, financial models provided the team with new insights into the cost drivers of components, and these insights were used to extract price concessions from key vendors. When the dust settled, the team had exceeded its goal and identified opportunities to reduce costs by 15 percent.

In another recent example, a large automotive component manufacturer was facing significant pressure from foreign competitors importing less expensive parts. The company’s costs were an estimated 7 percent higher than those of its major competitor. The company had made many small cost improvement efforts, but the results were disappointing. In order to prepare for the next round of contract bids and ensure future profitability, senior leaders decided to undertake a series of rapid DTC efforts on their major part categories, such as the column integrated module, the engine control module, and radios.

The team started by building a detailed cost model of each component to understand the main drivers of the cost structure. These cost models then informed a series of sprint-and-scrum efforts focused on major design changes to address overly thick casings, antiquated processor designs, and redundancies engineered into the products. Further, the sprint and scrums identified several other structural and tactical improvement opportunities, such as relocation of assembly to Mexico, better spans of control within the manufacturing operations, and greater procurement effectiveness.

The company was able to implement a majority of the improvements—and it achieved a cost reduction of about 9 percent across the key component groups. This allowed the company to defend its existing contracts from competitors and, more importantly, provided a truly unique approach to design that was leveraged across the organization, which helped its underlying profitability issues.

In both of these cases, establishing a cross-functional team broke down traditional silos and allowed engineering, sourcing, and manufacturing leaders to see new perspectives and think differently about solutions. The sprint-and-scrum methodology enabled the company to quickly prioritize among many ideas and suggestions, weeding out those with low potential and reallocating design resources to those with more promise.

As their competitive pressures mount, other industrial companies should take note. It’s time to remove the shackles that the stage-gate process can place on design. Whether they are shooting for the moon or just looking for a way to quickly reset their product’s cost positioning, the sprint-and-scrum approach will help companies get there.

It’s time to remove the shackles that the stage-gate process can place on design.

Topics: design, manufacturing, defense, stakeholders, industrials
Get s+b's award-winning newsletter delivered to your inbox. Sign up No, thanks