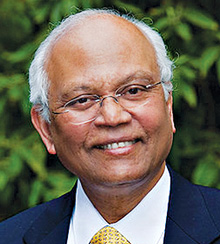 When it comes to India’s future, Raghunath Mashelkar admits he’s an optimist. Although millions of Indians are still living below the poverty line and many will continue to do so for decades to come, Mashelkar, an accomplished polymer scientist who has held a wide variety of leadership positions at prominent research and scientific institutions, believes that India has the raw materials — the talent and drive — to overcome its challenges and become a nation of innovators.

These advances, Mashelkar argues, should be developed to help the poor at a price they can afford; not just in India, but in emerging nations around the world. He calls this concept Gandhian engineering, citing examples such as the Tata Nano, the cheapest car in the world at a cost of about US$2,200; a hepatitis B vaccine that is 1/40th the cost of traditional vaccines but meets UNICEF’s quality requirements; and Aravind Eye Care’s cataract surgeries, performed on 300,000 patients annually, which cost 1/100th the fee charged in other countries but meet global quality standards.

Mashelkar, currently the Bhatnagar Fellow at India’s National Chemical Laboratory (of which he was formerly the director) and the president of the Global Research Alliance, a network of publicly funded R&D institutes from the U.S., Europe, and the Asia/Pacific region, sat down with strategy+business in Mumbai in January 2010 to discuss his views on innovation and creating breakthroughs, and his belief in the power of inexpensive and accessible technology to change lives.

S+B: What is Gandhian engineering?
MASHELKAR: It’s a term I coined for getting more from less for more people, a new way of expressing one of Gandhi’s teachings: “Earth provides enough to satisfy every man’s need, but not every man’s greed.” In other words, Gandhian engineering is inclusive innovation: developing products and services that improve life for everyone, innovation that doesn’t leave out the poor. We are talking about 4 billion people whose income levels are less than $2 a day. To raise their standard of living and quality of life — which is critical for India, China, and every other emerging nation to fully join the global economy as equals — we have to make goods and services that are ultra-low-cost; not only affordable, but extremely affordable; not “low performance, low price,” but “high performance, low price.” That’s what Ratan Tata [chairman of Tata Motors] did with the Nano. He set out to make a car with safety, comfort, and fuel efficiency available at a cost that was affordable to somebody who was driving a two-wheeler. [See “Too Good to Fail,” by Ann Graham, s+b, Spring 2010.]

S+B: Can you provide another example of Gandhian engineering at work in India today?
MASHELKAR: For the millions of people along India’s coastline who depend on fishing for their livelihood, a new system of satellite-based potential fishing zone (PFZ) forecasting has raised productivity levels and thus incomes. Before this technology was accessible, fishermen often returned home in the evening without any catch. Today, scientists can see the chlorophyll — the green coloration of water created by the activity of the fish — and can also measure the sea surface temperature, which changes due to the activity of the fish. The PFZ information is disseminated to the fishermen in two ways: first, through electronic message boards, where the information is posted. Second, some service providers are supplied with the information, which they then send by SMS text messages to the fishermen’s mobile phones, which can be purchased very inexpensively in India today. When the fisherman goes to these regions where the fish density is higher, his income level will rise. And, also significant, when he used to come back after catching the fish, the fisherman’s catch might rot because he wouldn’t be able to secure buyers quickly enough. Today, using his mobile phone even before he comes ashore, he has fixed where he’s going to sell.

So all of this technology is being developed and used to enhance prosperity, both for the provider of the low-cost product (in this case, for example, Bharti Airtel, one of Asia’s largest telecom service providers) and also for the user (in this case, the fisherman). Technology is going to be a game changer. If you provide people with high innovation at low cost, they will become more productive and efficient, and their earning potential will increase. We can keep improving lives in India and around the world just by making this technology affordable and accessible.

S+B: For the private sector to fully embrace the idea of innovating in emerging nations, won’t there have to be a system in place to protect intellectual property [IP]? Has there been progress made in this area?
MASHELKAR: Certainly, to turn knowledge into wealth, protection is required. Without it, investments will not come in. I’m a strong believer in establishing benefits for those who create ideas; at the same time, I’m a believer in sharing ideas with society. There needs to be a balance. But so far our track record hasn’t been good. The World Intellectual Property Organization, a U.N. agency charged with developing an effective global IP system, has held assemblies on IP protection during which the developed world and the developing world end up on opposite sides, and the meetings end without resolution.

We had an opportunity at a conference held in New Delhi in October 2009, called “Climate Change: Technology Development and Transfer,” which brought together governments, experts, industry representatives, and civil society. We said that 70 percent of the technologies needed to combat climate change exist today. We don’t have to create them; it’s just a question of sharing. At this conference, it was suggested that we create a global fund to help poorer countries license innovative climate change technologies for use in less-developed areas. This would give everyone access to critical intellectual property and pay the inventors for their work. It would be similar to the Global Health Fund [a public–private partnership created in 2002 to fight AIDS, tuberculosis, and malaria]. But this idea was not adopted. Unfortunately, sharing of and access to technologies for the global good are not yet close at hand.

S+B: Where are the next breakthroughs going to come from?
MASHELKAR: We have to be willing to invest in research that is highly risky. When I was director of India’s National Chemical Laboratory, I dedicated 1 percent of my budget to run a “crazy idea fund” — a fund to support ideas with a one in 1,000 chance of success. It was only 1 percent; otherwise I would have lost my job. But it made a difference, because people started asking crazy questions, trying to find solutions in areas we would typically dare not visit.

Similarly, I think if we identify 10 grand challenges, let the best minds in the world create ideas, and then fund them, we’ll find the breakthroughs we need. Two models exist for this. The first is the foundation approach, in which global inventor competitions are set up, with the winner receiving a monetary award to carry the idea forward. The second is the open source model, in which there’s no money involved, but the best and brightest get involved for the fun of it. For example, India’s Council of Scientific and Industrial Research now has a brilliant director-general, Dr. Samir Brahmachari, who created an open source drug discovery (OSDD) initiative to help find new drugs to combat tropical diseases that are traditionally neglected.

The strength of the model is that anyone can contribute via computer, adding to the research that already exists on the website: biologists, chemists, mathematicians, doctors, industry experts, management professionals, software engineers, university and college students, and established scientists. The incentive for contributors is the joy of science and seeing things happen. In addition, the project gives awards to those who solve important challenges. For example, project leaders awarded 120 Acer netbooks to the best contributors to OSDD’s Connect to Decode 2010 project, which expanded our understanding of the tuberculosis genome through the online collaboration of about 800 participants. Today, more than 2,000 partners in more than 75 countries are studying tuberculosis through the OSDD model, working together to create breakthroughs.

Topics: innovation, innovators, mobile, research and development, technology
Get s+b's award-winning newsletter delivered to your inbox. Sign up No, thanks