Superconsumers: A Simple, Speedy, and Sustainable Path to Superior Growth 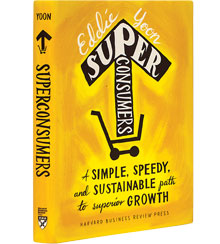 Superconsumers: A Simple, Speedy, and Sustainable Path to Superior Growth may look like a slight volume. But appearances can be deceiving. In 200 powerful pages, marketing consultant Eddie Yoon finally puts some meat on the bones of an idea that’s been floating around marketing for years, and applies a process to it. Focusing on the best customers — in sheer numbers, a minority — can have a profound impact on a brand’s overall success.

Yoon, a principal with the Cambridge Group, a marketing consultancy owned by Nielsen, doesn’t limit the discussion to people who have what might be called expected passions, such as wine or designer shoes. Rather, he kicks off by focusing on “Sally,” a superconsumer who is obsessed with…office supplies. For Sally, staplers and three-ring binders aren’t some sort of strange fetish; they bring sense to her job at a car rental agency. A three-ring binder of perfectly organized contracts is, to Sally, “like a trophy for a job well done and her way of bringing order to the chaos.”

Sally’s passion for just the right office supplies is the first window the book offers into what makes superconsumers tick. As Superconsumers emphasizes repeatedly, these customers aren’t just buying stuff. They are “hiring” a product to fulfill a larger quest or set of needs. “Find out what they’re ‘hiring’ your products for and what their quest is, and address both,” Yoon advises.

“Laura,” a superconsumer of “Nacho Cheese” (a real product, assigned a generic name by Yoon), is hiring the product to solve an array of problems related to her passions for people, cooking, and cheese in a manner that other brands don’t.

When Laura met with the cheese’s brand team, she demonstrated an attribute of the product that its marketers might not have noticed. Dipping a piece of broccoli into melted Nacho Cheese, “she pointed out how the cheese was viscous enough to form a perfect crown on the broccoli’s head without falling off the side, yet melty enough to fill every crack and crevice.”

Yoon introduces us to superconsumers devoted to a wide swath of consumer businesses and products, such as Netflix, grocery stores, beer, and theme parks. Just as Yoon believes most of us are superconsumers of something, there seem to be superconsumers for every brand.

Companies would be well advised to seek them out, and not simply because they can provide a disproportionate share of sales. Rather, it turns out that superconsumers can teach brands how to make inroads into other groups of consumers — and it’s here where Yoon’s argument really takes flight.

These other groups include potential superconsumers, who, as the name implies, might come to love Nacho Cheese as much as Laura does but just haven’t been alerted yet to its many virtues; autopilots, people who buy the product but are “going through the motions;” and uninvolved consumers. As might be expected, the last two groups are the most difficult to convert. Yoon suggests attracting them — if not turning them into superconsumers — by using superconsumers to figure out ways to shift a product’s “fun-to-chore” ratio. For instance, if a popular retailer suddenly makes it possible for consumers to bypass the long checkout line by completing transactions from their mobile phone, it can begin to convert the unconverted.

Sally’s passion for just the right office supplies is the first window the book offers into what makes superconsumers tick.

The vehicle through which brand passion spreads beyond its original superconsumers is what Yoon calls the “super geo” — “a group of consumers who are close enough physically or psychologically to inspire one another and create new superconsumers.” These super geos are the conduits through which brands can go viral. Yoon explains super geos through the prism of American Girl, which has 20 percent higher sales in super geo markets. American Girl isn’t simply a doll brand; its offerings include books, movies, and the experiences at its stores. As a result, it is “hired” to do many things for many different people. A girl might “hire” an American Girl as a toy. But other family members may view American Girl as a way to teach history through books, or a way to create memorable experiences at its stores. By being a brand that can be hired for multiple quests, it catches on. The girl might inspire a friend to begin buying American Girl, and that girl’s extended family may likely take to it, too…and so on and so on.

At times, Superconsumers drifts into being a promotional tool for Nielsen and its products, which include consumer data and other marketing services, in addition to the well-known TV ratings. On the other hand, some of the book’s insights probably wouldn’t be possible without Nielsen’s data trove.

Yoon is most interesting, however, when he draws on experience and powerful intuition. Yoon, a native Hawaiian, predicts the coming explosion of rash guards, a lightweight version of a wetsuit that covers most of the body and is popular in Hawaii. He believes many self-conscious consumers would clamor for a bathing suit that hides their bodies, but rash guards also keep swimmers warm, and reduce the need for sunblock. They could thus be “hired” to solve a trifecta of problems.

The key, Yoon explains, is for the product to break out of the super geo of Hawaii, where it started as surfer-wear but is now worn by almost everyone. If Yoon is correct, it’s only a matter of time before rash guards become more popular on the mainland.

Whether the product is a piece of surfer gear or Nacho Cheese, superconsumers have the capacity to turn a ripple into a wave.