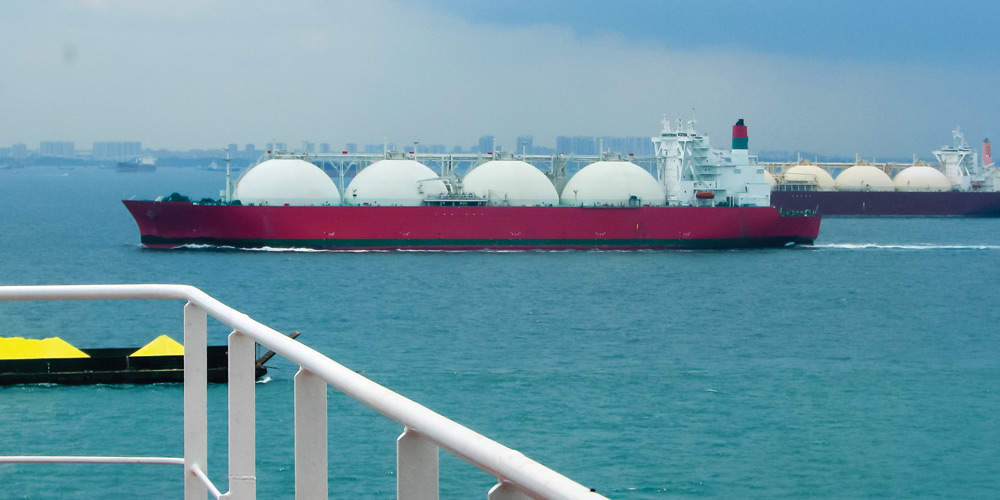 Cameron Parish in southwestern Louisiana is an unlikely location for a global revolution. Largely marsh and wetlands, the parish population of 7,000 has, until recently, been in a decades-long decline, with a median income about 40 percent below that of the United States as a whole. Yet, within a 25-square-mile radius, more than US$100 billion of infrastructure projects are under construction or under development — and they are leading a global revolution in energy. The new abundance of U.S. natural gas and liquefied natural gas (LNG) plants that are being constructed are transforming global energy markets.

The revolution is largely a technological one. Fracking has liberated vast supplies of natural gas from rock formations. Huge investments in liquefaction infrastructure have allowed natural gas to be transported first by pipeline to the coasts, and then via specialized tankers to growing markets worldwide. The result is a boon for producers once hamstrung by the physical limits of their pipelines.

These developments are contributing to a strengthening economy that is lifting more than just Cameron Parish out of economic stagnation. Natural gas is cheaper than coal and oil, and it also burns cleaner, benefiting both businesses and the environment. But LNG is also serving a purpose as a geopolitical tool, so much so that U.S. energy secretary Rick Perry refers to the fossil fuel as “freedom gas.” Because the U.S. is now shipping LNG in volume to Europe, Western Europe will need to rely less on Russia, which has previously wielded its natural gas exports as a political cudgel. Perry has gone so far as to declare that with fracking, the U.S. is delivering a new “form of freedom” to the continent.

The LNG market is becoming a cause célèbre for politicians, environmentalists, and industry players alike. But although the potential is vast, there is much at stake for U.S. companies operating in the market. Complexities brought about by increasing competition, technological advances, and geopolitical uncertainty mean getting the execution right is critical, and may make the difference between driving the revolution and becoming a commercial — and economic — liability.

Advances in liquefying and transporting natural gas have evolved the market. Once constrained by regional boundaries, it is now fully global. Qatar and Australia are, alongside the U.S., emerging as major exporters. The regional model of buyers purchasing under tolling agreements and long-term contracts historically linked to oil index prices has given way to more flexible, often smaller, short-term contracts based on gas prices. Now the rapidly expanding global LNG market is becoming a commodity business not unlike any other global commodity business, with greater market liquidity and an increasing role for financial and portfolio players.

The LNG market is becoming a cause célèbre for politicians, environmentalists, and industry players alike. But although the potential is vast, there is much at stake for U.S. companies operating in the market.

The supply chain has also become more flexible as a result of the growth in the shipping fleet, increase in import and export facilities, reduced cost of transportation, introduction of floating facilities, and increasing importance of gas hubs. Global prices, which often varied sharply, are converging on indexes such as Platts JKM and Henry Hub. Global portfolio players and financial players are providing trading and liquidity, and there is growth in the number of importer–exporter combinations. Buyers now have more supplier choice, meaning producers must compete in an intensified sales environment.

These changes have contributed to the creation of a cost-focused, globally commoditized environment that poses challenges for LNG project developers seeking to finance, construct, and operate their proposed facilities.

U.S. LNG suppliers, fully incorporating costs of gas supply, liquefaction, and transportation to major markets (e.g., Asia), are near the high end of the global supply curve. Given the sharp variance in break-even prices for major producers (see “LNG break-even prices for major producers 2025 projection”), there will be winners and losers. Some projects under construction will become commercially unviable, and some that are planned will not be built. 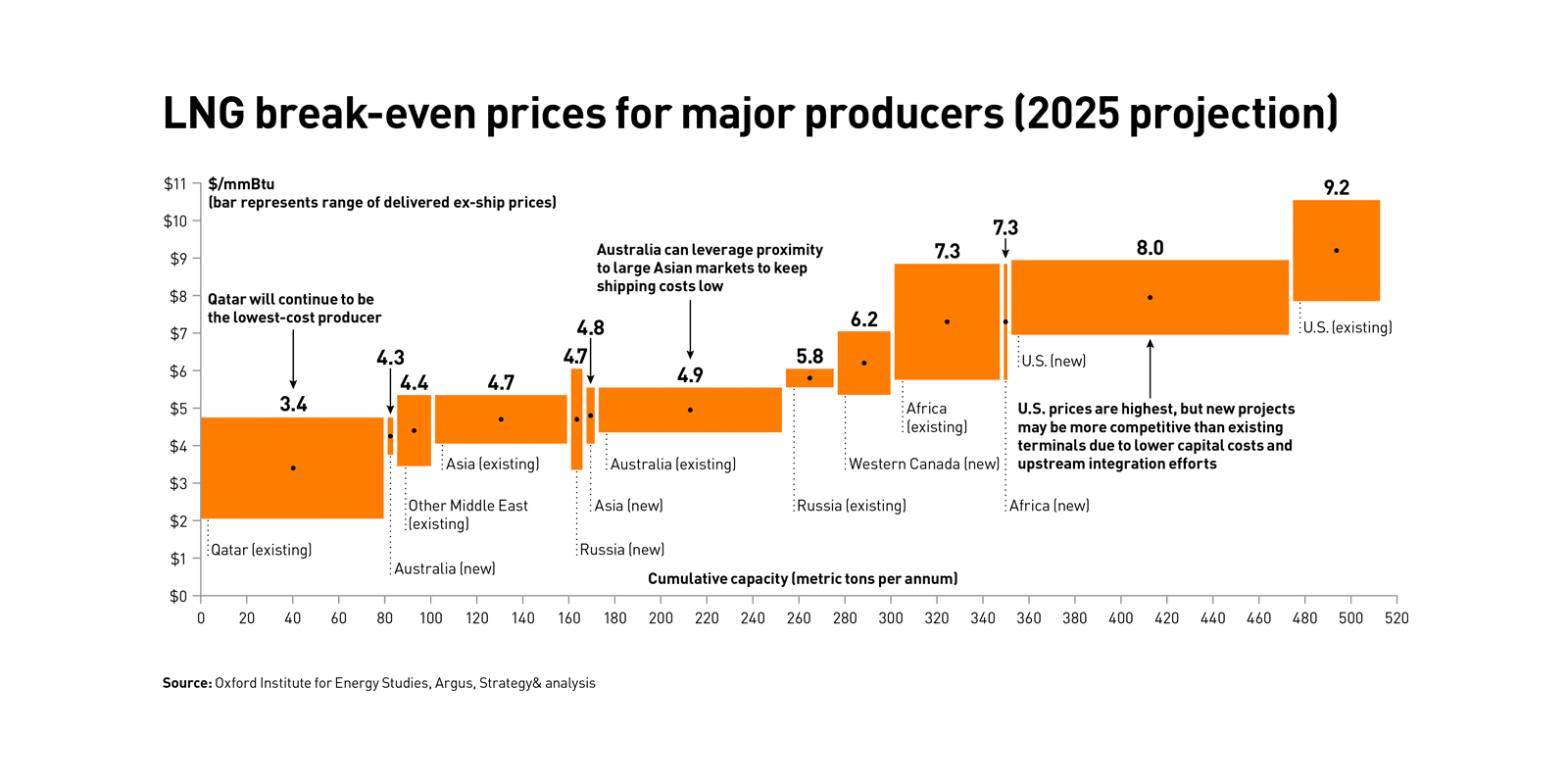 Global LNG supply is also expected to outpace demand over the next several years. Demand is projected to grow steadily, driven by the role of gas in the energy transition and access to LNG by new buyers. Even so, the supply from projects currently underway will likely exceed demand through 2025. In 2025, the market will be oversupplied by approximately 80 metric tons per annum (MTPA) as overall supply reaches approximately 500 MTPA, thanks largely to the shale boom in the United States.

It is possible, however, that any oversupply could be fully absorbed by increased utilization from existing regasification infrastructure. But economic fundamentals and policy drivers related to environmental protection, CO2 reduction, and incentives for pipeline infrastructure in some critical demand markets — including India and China — will be the largest drivers of the market. The market will reach balance in 2025 if these drivers develop alongside a rise in regasification facilities’ utilization. Overall, however, at the current utilization rates, the supply–demand outlook for 2025 favors and gives significant leverage to buyers, the profile of which is also changing (see “Global LNG supply and demand outlook”). 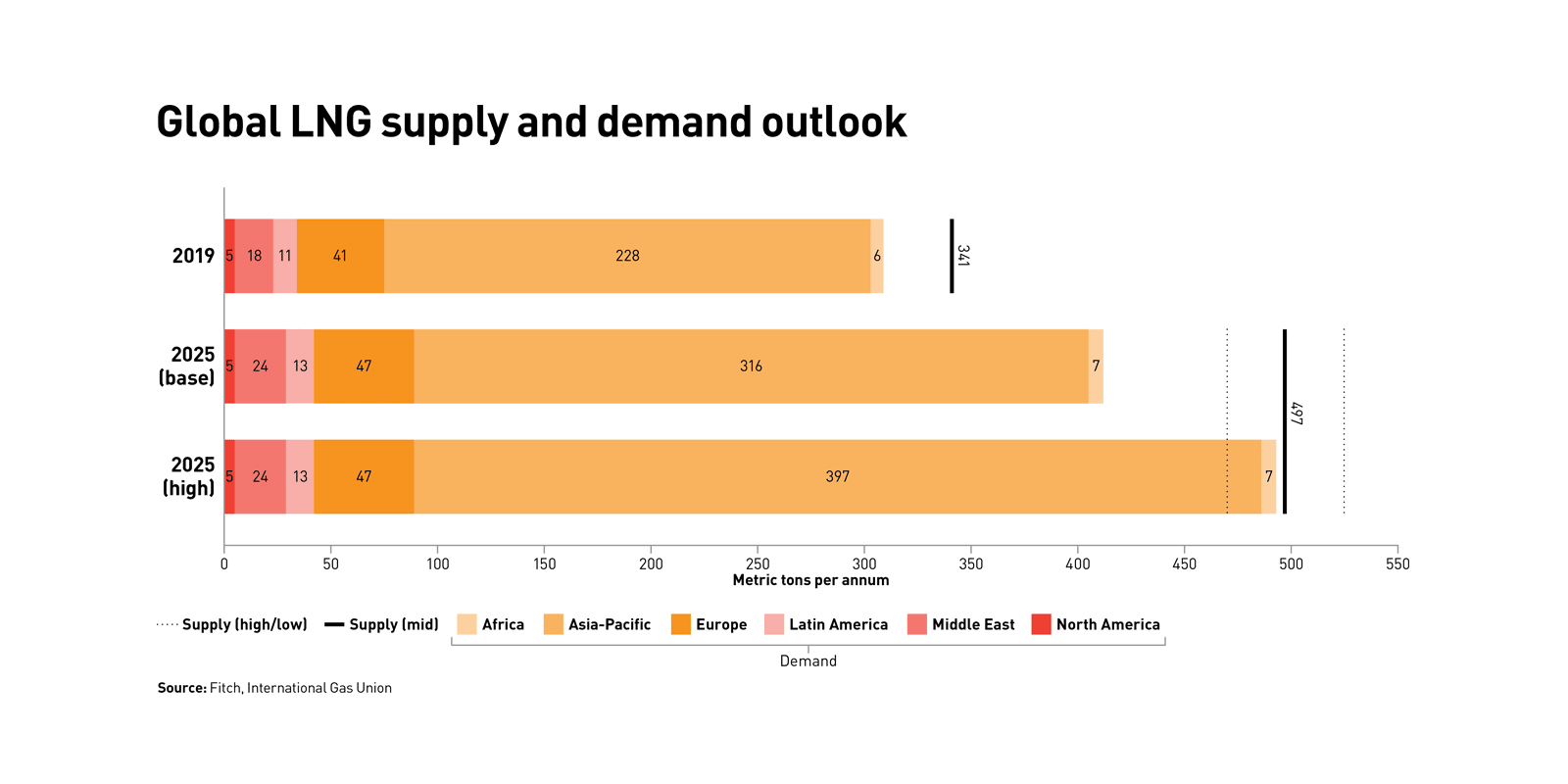 The demand from traditional buyers Japan and Korea is being overtaken by demand from China, India, and growing Southeast Asian countries such as Bangladesh and Pakistan.

In order to compete in this challenging environment, players must develop and build upon differentiating capabilities specific to different plays. For example, they can achieve LNG cost leadership by exploiting cost competitiveness along the entire value chain. They can manage their portfolios effectively through building a larger supply base, diversifying sources and buyers, and offering higher flexibility and tailored pricing. And they can participate farther down the value chain by investing directly in assets or developing downstream positions that bring them closer to the consumer in key markets.

Sales, marketing, and trading. LNG market dynamics are changing dramatically. A market with tight regulation, marked by long-term, oil-indexed contracts, is becoming a more competitive buyer’s market, marked by contracts of shorter volume and duration and unrestricted destinations. This shift makes it imperative for suppliers to strengthen their sales, marketing, and trading acumen. They must effectively understand the economics of their buyers’ businesses, including their acceptable price points and their commitments to their own customers, such as delivering reliable energy. They must learn customers’ alternative suppliers and their landed prices, contract terms, and ability to offer commitments. By optimizing these capabilities, suppliers can effectively tailor purchasing models for buyers, maximize their negotiating leverage, and successfully finance their projects.

The most successful projects have originated from an appreciation of fundamental economics at every stage of the value chain. This is coupled with an understanding that to make a project successful, risk and return must be effectively allocated.

Capital project execution. LNG capital projects have historically been difficult to execute given their inherent complexity. According to research conducted by Wood Mackenzie, 90 percent of all LNG projects exceeded their budgets, and 60 percent experienced schedule delays. A global study of cross-industry capital projects conducted by Strategy&, PwC’s strategy consulting business, found that 47 percent of megaprojects — i.e., large capital infrastructure projects — underperformed regardless of industry, and that their median cost grew 30 percent on average.

Cost and delay risks are particularly high for U.S. developers along the Gulf Coast, where the majority of the U.S. supply is sourced. The concentration of capital projects in the region gives rise to critical resource challenges, including a scarcity of technical skills such as pipe fitting and welding, high attrition rates due to an abundance of opportunities nearby, and the logistical challenges of coordinating large, multiple workforces. Furthermore, LNG projects along the shores of Texas and Louisiana compete not only with one another but also with other capital developments, including petrochemical projects. All of these factors highlight the importance of effectively managing and executing capital projects if U.S. suppliers want to succeed.

Executing these projects on time and within budget will require maximizing the use of modularization and standardization, as well as taking full advantage of advanced technologies in construction. We’re seeing this taking place with developers setting goals for lowering the cost of production, through modularization, site selection, standardization, and the combining of midscale modules to maximize the ability of suppliers to manufacture and assemble components in factory settings, reducing the risk associated with past LNG capital projects.

In this new age of competitive, low-cost production, developers will need to be disciplined, employing sufficient advance planning and analysis. They will need to work collaboratively across the construction consortium with flexible contracts that appropriately allocate risks and share benefits with partners, suppliers, and end customers.

Operational excellence. As the LNG market has shifted to a commodity pricing environment, plant owners have sought ever greater operational efficiencies. But many of the efficiencies gained come with outsized financial and operational risks in the event of a plant outage. The risk of downtime (caused, for example, by a refrigerant compressor train being out of service) combined with an industry trend toward commodity pricing for LNG contracts means that the onus for operators to ensure operational excellence has never been greater. They must fully understand their operational costs, their risks, and the means to mitigate them both.

Major operational cost factors include gas supply, labor, plant maintenance, and shipping. Savvy operators have upskilled their gas feedstock contracting teams and have achieved favorable terms. For example, according to public filings, Cheniere Energy’s LNG supply contracts are based on Henry Hub spot gas prices; however, Cheniere has negotiated gas supply contracts at $0.10 less than Henry Hub. The cost of labor for U.S. LNG is mostly a product of a plant’s location; those based along the Gulf Coast enjoy favorable labor costs. However, operators need to keep a steady eye on labor cost trends and any potential pull on labor supply from additional LNG projects and adjacent industries.

A larger trend has arisen related to plant maintenance, one in which operators are shifting to predictive analytics and run-to-fail operations — in which equipment is allowed to run until it breaks down, then is reactively maintained/replaced — for noncritical pieces of equipment. As operators look to understand their predictive analytics data, they are integrating more tightly with their suppliers. This close collaboration involves sharing maintenance and runtime data, involving suppliers in scheduling discussions, and allowing suppliers to have input on equipment selection and operational parameters.

The advancements in LNG are transforming global energy markets, with profound implications for the companies involved, the global energy balance, and, some would say, the future of the planet itself. Though that future is uncertain, U.S. LNG developers must get their operations in order to fully realize the value and power of this relatively new resource.