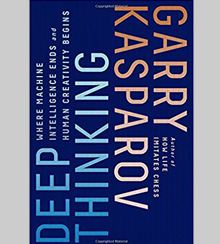 In June 1985, Garry Kasparov, the highest-ranked chess player in the world, simultaneously played 32 games against 32 computers. He swept the event, winning every game. Twelve years later, in May 1997, Kasparov played a high-stakes, head-to-hard-drive, six-game match against a single computer: IBM’s Deep Blue. The result? The supercomputer beat the reigning chess champ in regulation play. Artificial intelligence had hit the big time.

It’s taken Kasparov a long time to process his historic battle against Deep Blue. “I’m a sore loser,” he frankly admits in Deep Thinking, which is a meditation on both his personal history and the future of work. A full 20 years later, that characteristic is evident in Kasparov’s description and analysis of the match — and his detailed suspicions about spying and “human intervention” by IBM.

Kasparov clearly didn’t expect Big Blue, led in those days by Louis Gerstner Jr., to play to win. The company invested an estimated US$20 million in developing and promoting Deep Blue, and the win, Kasparov argues, boosted IBM’s stock by $11.4 billion in just over a week — to say nothing of the value that accrued to the brand. Nevertheless, Kasparov appears surprised that IBM treated the match as anything other than a collegial experiment in computer science (even though he had negotiated a guaranteed minimum payday of $400,000 in case of a loss; the Deep Blue development team received $700,000).

Unless you are a serious chess player, however, Kasparov’s account of the match isn’t the best reason to read Deep Thinking. The book has much broader implications. Kasparov was a highly experienced, remarkably accomplished, well-paid knowledge worker who faced the real possibility of being replaced by a smart machine — a situation in which many of us may find ourselves in the coming years. “It was my blessing and my curse to be the John Henry of chess and artificial intelligence, as chess computers went from laughably weak to nearly unbeatable during my twenty years as the world’s top chess player,” he writes.

In the years since, Kasparov hasn’t exactly come to welcome our new computer overlords. But he has sought to better understand the relationship between human and machine intelligence — and its potential. And it turns out that he has hit on an insight that is becoming clearer as time passes. Although the prospect of machines replacing humans gets all the attention (and the angst), the prospect of humans working alongside machines should be embraced as a way to improve any number of results.

For instance, in the 1990s, Kasparov organized the first “advanced chess” matches, in which the players were partnered with computers. To Kasparov’s surprise, a pair of amateur players beat grandmasters in one of these matches. “Their skill at manipulating and coaching their computers to look very deeply into positions effectively counteracted the superior chess understanding of their grandmaster opponents and the greater computational power of other participants,” he has explained. Kasparov’s conclusion: “weak human + machine + better process” is superior to “strong human + machine + inferior process.”

In another advanced chess match, Kasparov replayed a grandmaster whom he had beaten without computers a month earlier. This time the grandmaster used a digital assistant, and the match ended in a draw. “My advantage in calculating tactics had been nullified by the machine,” Kasparov says.

“Overreliance on the machine can weaken, not enhance, your own comprehension if you take it at its word all the time.”

The upshot is that machine learning has the capacity to level many competitive playing fields. Kasparov repeatedly reminds us that machines don’t get tired or emotional — a big advantage in the world of competitive chess and many other high-stakes settings (such as trading stocks or analyzing political campaigns). Thus, they can help us avoid blunders and make more objective decisions. “Human plus machines can keep you honest, as long as you are honest with your machines,” he writes.

Another way in which machine intelligence can level playing fields is by reducing the competitive advantage of experience and resources. Kasparov notes that chess grandmasters are now emerging from nations that have not historically had strong chess traditions, such as Vietnam and Norway, but that grandmasters are also attaining that rank at younger ages. “The beginning of the boom coincides exactly with the spread of professional training software with strong engines and online play,” writes Kasparov.

Happily, machine learning won’t erase the competitive advantage of human creativity. When playing fields are level, the best ideas and strategies will win. In this regard, digital natives may ultimately find themselves at a disadvantage as access to artificial intelligence becomes more widespread. Kasparov observes that young chess players who have grown up with chess engines don’t always understand the rationale behind the moves they make. “Overreliance on the machine can weaken, not enhance, your own comprehension if you take it at its word all the time,” he warns.

Overall, the first chess champion to lose to a computer is remarkably sanguine about the prospects of a world filled with intelligent machines. “Machines that replace physical labor have allowed us to focus more on what makes us human: our minds,” Kasparov writes. “Intelligent machines will continue that process, taking over the more menial aspects of cognition and elevating our mental lives toward creativity, curiosity, beauty, and joy. These are what truly make us human, not any particular activity or skill like swinging a hammer — or even playing chess.”