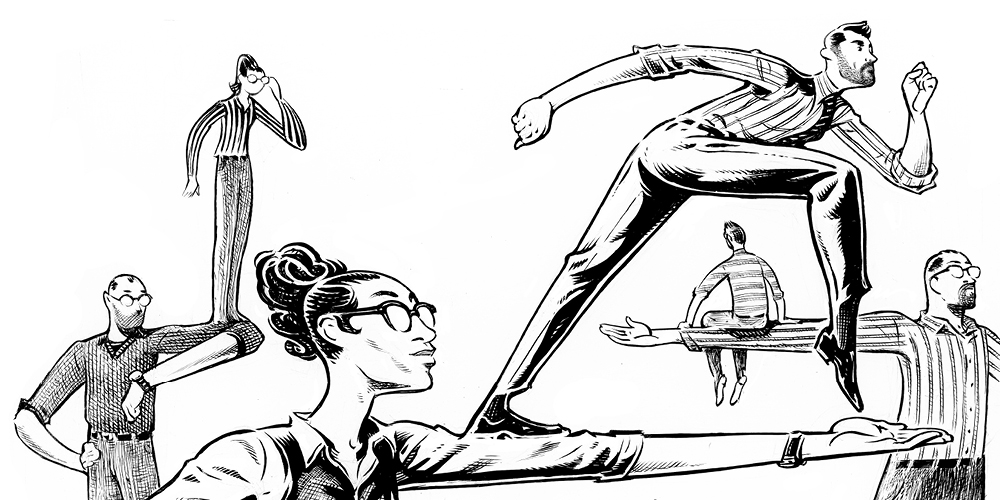 When it comes to the future of work, digital skills are only part of the story. Resilience and creativity, empowered by supportive leadership, are essential to a thriving, innovative workforce. A new vision requires cultural changes to help you gain the trust of your employees and new technologies to drive a lasting impact in the marketplace. To learn more about empowering your own workforce, click here.

“I got an urgent email from my manager at 4:30 a.m., asking me to make some small changes in a report I’d written for a client. Not only was it early in the morning, I was on my way to the airport for a family vacation. Any of my colleagues could have made the changes. I didn’t know whether to laugh or cry,” says Sasha, a manager in a multinational IT services consultancy. She had spent most of the previous month working 14-hour days as her team rushed to evaluate the client’s IT system and future needs. “Meanwhile, the firm’s leaders were stressing the importance of well-being and urging everyone to take time off to recharge. They were saying one thing and doing another. Clearly, I couldn’t trust them.”

Many business leaders are devotees of the power of culture. Two-thirds of board and C-suite participants in PwC’s 2021 Global Culture Survey say culture is more important to performance than strategy or operating model. But Sasha’s story highlights a major obstacle to tapping its potency: many employees simply don’t trust their leaders. The reason is inconsistency, which manifests itself in two ways. First, some leaders, like Sasha’s, don’t act authentically—their behavior is at odds with the cultural message they’re sending. Second, in many organizations, the purported culture doesn’t match employees’ experiences.

Both problems could be contributing to a looming talent retention crisis. After “sheltering in job” during the pandemic, people are now quitting their jobs in enormous numbers. Four million workers resigned in the US in April 2021, the highest level in 20 years, and another 3.9 million resigned in June 2021. A global Microsoft study found that 41% of workers are considering quitting their job or changing their profession this year.

PwC’s research suggests that leaders are right to prioritize culture in the face of this challenge and many others. Respondents in PwC’s survey who said their organizations have a distinctive culture were more likely to report good outcomes during the first year of the pandemic (see graphic below). But for culture to create a competitive advantage and help leaders build trust with their employees, leaders’ aspirations about it and employees’ experiences with it need to align.

How can leaders close these gaps? With a clear-eyed understanding of the impact of leadership authenticity and cultural cohesion and an action plan for activating their culture, they’ll be well on their way.

The value of authentic leadership

When New Zealand’s prime minister, Jacinda Ardern, got onto Facebook Live at the beginning of the pandemic—from her home, after putting her daughter to bed, and in a well-worn sweatshirt—to explain to citizens the importance of imposing a national lockdown, she was sending a clear message: “We’re all in the same boat.” The changes she was telling her constituents they’d have to make were ones she would also have to live with.

For culture to create a competitive advantage, leaders’ aspirations about it and employees’ experiences with it need to align.

A lot of leaders seem to think they also walk the talk on culture. PwC’s survey shows that 73% of senior management think they do. But only 46% of the rest of the workforce agree. We’ve seen firsthand that this mismatch damages trust. And without trust, it can be difficult to motivate people, bring about change, and encourage the desired behaviors.

One of our team members at the Katzenbach Center, a global institute for organizational culture and leadership at Strategy&, PwC’s strategy consulting business, is a former US soldier. He tells a story that accentuates the importance of leadership authenticity. In the armed forces, which rely on the ranks obeying their leaders’ instructions without question, Army leaders routinely make sure they eat only after their troops have been fed, to give a clear signal that the troops’ welfare is their top priority. But on one occasion when our colleague was a first lieutenant in the 25th Infantry Division, his entire unit was locked down because a piece of equipment was missing. “The lockdown went on all day and into the evening, and instead of hot food, we were given MRE [meal ready-to-eat] rations. But then some of the soldiers saw the commander’s wife sneaking him Burger King. After that, he was completely ineffective as a leader because no one in the unit respected him.”

Consistency and cultural coherence also matter in terms of the actions of the organization as an entity. The US retail giant Target, which has long touted its commitment to employee training and development, recently announced a program to pay 100% of college tuition for any of its 340,000 full-time and part-time US-based workers pursuing business-related majors at certain colleges. The program is one of the most high-profile examples of a company taking concrete action to reinforce what it says about its culture and values.

Although few companies can afford a program as extensive as Target’s, consistency on any scale matters. Take, for example, a financial-services company that prided itself on its culture of meritocracy, which was based on a transparent performance management process. “We all knew where we stood and exactly what we needed to do to get on. We were always told that our annual performance review, and whatever happened as a result of it, should never come as a surprise to us,” said Paul, who joined the organization in his 20s and progressed steadily over the following decade.

The cultural wheels came off when an economic downturn made layoffs necessary and management failed to communicate what was coming. “Four people in my department were laid off,” Paul told us. “Three months earlier, we had all been told we were doing the right things, and then [the four individuals] were suddenly told to go because their performance wasn’t up to scratch. Morale took a nosedive after that, and it never really recovered.”

In our work, we’ve seen many similar examples of inconsistency and the mistrust it breeds. A company that wanted to improve collaboration across silos continued to align metrics and rewards to individuals meeting personal financial targets. A product team was told to focus on quality, even though KPIs were built around time to ship. To overcome such inconsistency, leaders should examine all of the formal and informal building blocks of their cultural DNA at every touch point across the employee experience.

Software company HubSpot has won awards for its culture, which emphasizes transparency, and has taken steps to make sure that it is consistent in not just talking about transparency but practicing it. It classifies every employee as a “designated insider,” for example, and shares detailed financial and management information with the entire workforce. It also welcomes all contributions equally, irrespective of a person’s status or place in the hierarchy.

Achieving strategic objectives, including improving recruitment and retention and building trust with employees, will be impossible if a chasm remains between what leaders and organizations espouse about culture and what employees experience. Here are three actions leaders can take to activate culture and gain competitive advantage.

• Measure the impact of culture on strategic goals. Leaders can ask how their organization’s culture is helping or hindering their ability to drive business outcomes. They can also identify any areas of incoherence between stated cultural aspirations and employees’ day-to-day experiences. Many tools, such as people survey data analyzed by level, or a specific cultural diagnostic or employee experience diagnostic, will indicate how well culture is aligned with strategy and which drivers of experience matter most to employees.

To get a read on how leadership actions are perceived, often the best solution is simply to ask the organization’s authentic informal leaders (AILs)—the people who don’t have official authority but are influencers and leaders nonetheless. They will reveal the truth, even if it’s uncomfortable. They can tell you what the biggest disconnects are that will undermine the organization’s stated goals.

• Focus on the cultural traits and behaviors that support business goals. Understanding culture begins with taking an inventory of the organization’s traits (tendencies for people to behave in a certain way, such as “consensus-driven” or “hierarchical”) and habitual behaviors (how they spend their time, make decisions, handle conflict, and perform their jobs on a regular basis). But it’s important to move decisively from understanding the behaviors that are present in an organization’s culture to prioritizing those that will be most helpful in meeting business goals. Identifying these critical few behaviors is a delicate process.

Consider traits and behaviors through multiple lenses: What energizes employees most, and what are their worst pain points? What cultural qualities are useful in executing strategy, and what traits hold the organization back?

There will be inevitable trade-offs to make in selecting the critical few behaviors. For instance, an organization might need to balance being customer-centric with maintaining an environment where employees feel cared for and don’t get burned out. Or an agile, high-performing organization might need to avoid alienating or marginalizing people with different perspectives, backgrounds, or capabilities. How can a business create a safe space for people to speak up while also holding its people accountable? Leaders must grapple with these scenarios and decide how to respond—then commit to signaling and modeling the trade-offs in highly visible ways.

• Carry it forward with cultural change enablers. The final stage is to make sure your culture is aligned across the entire organizational system.

An actively managed culture nudges people toward the critical few behaviors that support business success. We’ve identified specific cultural change enablers that are effective in helping organizations create coherence around the traits and behaviors they’ve identified as most important. Setting the right tone from the top, having the right technology and tools to support change, and gathering and acting upon employee feedback are examples of enablers. Critically, these enablers span both employee experience and culture—two sides of the same coin—to support strategy in an integrated way. PwC’s survey data shows that organizations describing their culture as a source of competitive advantage have activated at least four of these enablers.

Two of the enablers directly relate to leadership authenticity: tone from the top and visible leadership endorsement and support. To close the authenticity gap, leaders need to get out of their offices and onto the front lines so they can understand the day-to-day worker realities that their leadership decisions create. “Management by walking around” might be more difficult if workers are virtual, but it’s no less important.

Culture as a source of competitive advantage

PwC’s 2021 Global Culture Survey shows that culture can deliver competitive advantage during challenging times. But translating talk about culture into action presents an enduring challenge for leaders. When aligned with strategy, purpose, and the operating model, culture can be a powerful force that builds trust, supports retention, and protects the business against the next crisis.