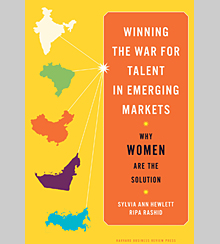 Major companies have been seeking to increase the number of women in their workforce for decades. At first, their efforts were typically spurred by a compliance mind-set, aimed at demonstrating good corporate citizenship and warding off class action lawsuits. Women were hired, but rarely given more than cursory support. This resulted in disproportionately high attrition rates, especially at the managerial level.

In the 1990s, companies realized that this attrition was a waste of valuable resources. In addition, the “war for talent” heated up, and the job markets for the best and brightest became less tied to economic cycles. Companies recognized the need to draw from the broadest base of talent possible and began to develop strategies aimed at retaining women.

In the past decade, as Sylvia Ann Hewlett and Ripa Rashid so ably describe in their new book, the need to hire and retain female talent has gone global. They point out that women already make up 30 to 50 percent of the workforce in emerging economies. But if nations such as China, India, Brazil, and Russia hope to sustain their fast-paced economic growth, women will have to make up a larger percentage in the future, and more of them will have to ascend to leadership positions.

The excerpt below demonstrates how the global technology company Infosys Technologies Ltd. focused on the hiring and retention of female talent and dramatically improved its results. Whether the company can make the shift to developing women at strategic levels remains to be seen, but it is clear it has successfully taken the first steps on that journey.

An excerpt from Chapter 8 of Winning the War for Talent in Emerging Markets: Why Women Are the Solution

In the early years of the new millennium, Infosys, the Bangalore-based information technology giant whose name is practically synonymous with India’s booming business process outsourcing industry, was running out of young engineers. Like every other company in the burgeoning field, it was engaged in a fierce war for the best and brightest university graduates. Unlike many of them, Infosys specifically targeted women as a solution — not only to expand the potential pool of top talent but also to tap in to a wider range of intellects. “Diversity brings in creativity and innovation,” explains Nandita Gurjar, senior vice president and group head of human resources. “We are a very large organization, large enough to form a society on our own, and we want to make sure that the Infosys society reflects the greater society.”

The Infosys Women’s Inclusivity Network (IWIN) was launched in 2003, when 17 percent of the Infosys employees were women. Today, 34.1 percent of the workforce is female — in absolute numbers, more than thirty-six thousand women. Women make up 40.3 percent of entry-level workers, 24.2 percent of midlevel managers, 6.5 percent of senior managers, and 6.2 percent of top-tier leaders, nearly double the number of six years ago.

The key reason for those impressive figures is IWIN. The program has three aims: to persuade more high school girls to study engineering in college; to attract more female engineers to Infosys; and to make it easier for women to maintain their careers at the company after having children.

The core element of IWIN in making Infosys a female-friendly environment was identifying the stress points at which women tended to leave the organization and creating policies that helped them deal with those stresses. Surveys showed that many Infosys women dropped out after getting married; the numbers skyrocketed after the birth of their first child and [the dropouts] were almost universal after the second. “There was no formal process of retaining women employees or attracting former employees who had left to have children and might want to come back,” says Gurjar.

IWIN began by introducing a one-year child care sabbatical with the option of working part-time for the next two years. The part-time option permits employees to work either half-days or a few full days per week. A satellite office in the center of Bangalore enables prospective and new mothers to avoid traveling to the suburban main campus. “It can cut a commute by 50 percent,” says Gurjar. Flexible work schedules and telecommuting are also available.

Approximately 96 percent of the part-time employees are working mothers, Gurjar reports. During sabbaticals, women can stay connected with their teams and catch up with technology advances that occurred during their leave. They are also put on projects, with a strong monitoring system in place for their first two months back to spot problems and accelerate learning. In addition, if a returning mother feels that her job is too stressful, the WithInfy internal job posting network helps her find alternative career opportunities so that her skills aren’t completely lost to the company.

Every year, the company asks women to identify three things that it can do to make Infosys more attractive to women and make it easier for them to do their jobs, says Gurjar. “We do all of them.”

For example, expectant mothers asked for parenting workshops and health programs. Infosys provides daily Pregnacare yoga and fitness classes on the main campus. There’s an online referral service for hospitals, pediatricians, day care centers, nannies, and schools. Nursing stations supported by women lactation experts and a doctor on call are set up in all the offices. Similarly, all the offices have day care centers within four kilometers; most are equipped with Web cameras so that mothers can check in remotely throughout the day. Employees use office shuttle buses to drop their children at day care free of cost.

Concierge services assist with tax returns, insurance advice, telephone hook-up, and other mundane tasks that can stretch a long day to the breaking point. Although many of these services are used as much by men, Gurjar says, “During the times when a woman is feeling overwhelmed by family and work, these are the things that help her get over the hump.”

As a result of these programs, the number of women returning to work after maternity leave increased from 59 percent to 88 percent in the past five years; the total number of working mothers tripled during that time.

IWIN recently expanded its offerings to include life counseling for young women — 60 percent of its entry-level women join the company directly from university — as well as professional support for women facing harassment at home.

The company hopes these policies will persuade more high school girls to decide to study science and engineering. To get the word out, it routinely brings large groups of high school girls from all around the country to Infosys campuses. “They see our workforce, learn about the customers, the management, the possibilities,” says Gurjar.

The company’s ultimate goal is to have women make up at least half of the workforce, if not more. By creating a work environment that both attracts and retains them, IWIN helps make Infosys a magnet for women.