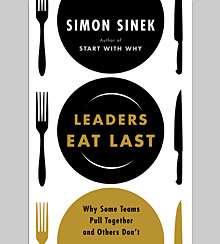 Neoliberalism, introduced to the United Kingdom by Margaret Thatcher and to the United States by Ronald Reagan around 1980, is a set of economic ideas and policies designed to liberate the private sector from the shackles of government. Tax cuts for upper-income groups, combined with the deregulation of industry and finance, were supposed to unleash an investment-driven wave of economic growth so powerful that all boats would rise. But the real wages of working people didn’t rise.

One reason was the crippling of organized labor and collective bargaining—seen as impediments to economic restructuring—that was set in motion by Reagan’s successful assault on the air traffic controllers union in 1981. As Simon Sinek shows in the spirited excerpt below, the unintended consequences of Reagan’s strikebreaking rippled through the economy. It paved the way for raiders to buy up companies, load them with debt, sell off divisions, and force mass layoffs. It shifted the mind-set of corporate leaders from “retain and invest” to “downsize and distribute,” and it altered the fabric of the relationship between employer and employee.

The harm done to the competitiveness of companies and nations is still being tallied. As corporate leaders ponder how to build broader markets, revitalize the consumer economy, and sustain their own innovation, it’s worth reflecting on the value of unions. Could a strong organized labor movement, especially if it existed worldwide, actually be a boon to business?

An excerpt from chapter 11 of Leaders Eat Last:
Why Some Teams Pull Together and Others Don’t

It’s rare that we can point to an exact date when a business theory or idea becomes an accepted practice. But in the case of mass layoffs, we can. August 5, 1981, was the day President Ronald Reagan fired more than 11,000 air traffic controllers.

Demanding more pay and a shorter workweek, PATCO, the air traffic controllers’ union at the time, was embroiled in a vicious labor dispute with the Federal Aviation Administration. When the talks broke down, PATCO threatened to go on strike, ostensibly shutting down airports and causing the cancellation of thousands of flights during one of the busiest travel periods of the year.

Such a strike is illegal, according to the sometimes controversial Taft-Hartley Act of 1947. The act essentially prohibits any labor strike to cause unfair harm to those not involved in the dispute or to do any damage to any commerce that would negatively affect the general welfare. This is the reason police and emergency room nurses are forbidden to strike. The damage such a strike would cause is believed to outweigh any grievances over unfair pay or hours.

Without an acceptable deal and, worse, without the ability to find common ground, on August 3, PATCO’s members refused to go to work. Given the strike’s impact on the country, President Reagan got personally involved, ordering the air traffic controllers back to work. Meanwhile, contingency plans were put into place, with supervisors (who were not members of the union), a small group of controllers who had chosen not to strike and military air traffic controllers enlisted to cover the losses. Though not a perfect solution, these temporary workers were able to keep the majority of flights going. The effect of the strikes was not as severe as expected, and so, on August 5, 1981, President Reagan fired 11,359 air traffic controllers, nearly every controller working for the FAA at the time. And it didn’t stop there.

Reagan banned every one of the strikers from ever working for the FAA again for the rest of their lives, a ban that remained in effect until President Clinton lifted it in 1993. Many of the air traffic controllers who were fired that day were war veterans (which is where they learned the trade) or civil servants who had worked hard to earn their middle-class incomes. Because of the ban and the fact that their skills were hardly transferable to other industries (there’s not a huge demand for air traffic controllers outside of the FAA), many of them found themselves in poverty.

In an attempt to alleviate one short-term strain on our country, President Reagan inadvertently created a new, longer-lasting one. By firing all the air traffic controllers, he sent a message to business leaders across the nation. He unwittingly blessed the swift and even aggressive decision to use mass layoffs to guard against a short-term economic disruption. Though I am certain Reagan never intended it as such, some eager CEOs interpreted his actions as permission for them to do the same. There was now a precedent for protecting commerce before protecting people. And so, for the first time ever, the social conventions that had restrained many a CEO from doing something that many may have wished they could in the past were instantly gone.

With the tacit approval from on high, the practice of laying off people in mass numbers to balance the books started to happen with greater frequency. Layoffs had existed before the eighties, but usually as a last resort and not an early option. We were now entering a time in which even meritocracy mattered less. How hard someone worked or how much they sacrificed or contributed to the company no longer necessarily translated into job stability. Now anyone could be laid off simply to help balance the books for that year. Careers ended to make the numbers work. Protecting the money, as economic theory, replaced protecting the people. Under such conditions, how can we ever feel safe at work? How can we ever feel committed to the jobs we have if the leaders of our companies aren’t committed to us?

The very concept of putting a number or a resource before a person flies directly in the face of the protection our anthropology says leaders are supposed to offer. It’s like parents putting the care of their car before the care of their child. It can rip apart the very fabric of the family. Such a redefining of the modern leader wreaks the same havoc on relationships in our companies (or even our society) as it does in our families.

Starting in earnest in the 1980s, public institutions and industries succumbed to this new economic perspective. The consumer products industry, the food industry, the media, banking, Wall Street, even the Congress of the United States have all, to varying degrees, abandoned the people they exist to serve in favor of more selfish priorities. Those in positions of authority and responsibility more readily allow outside constituents—sometimes unengaged constituents—to influence their decisions and actions. By agreeing to offer a supply to meet the demands of outsiders, these leaders who act like followers may make the profit they expect, while harming the people they claim to be serving. Long-term thinking gives way to short-term thinking and selfish replaces selfless, sometimes even in the name of service. But it’s service in name only.

This new leadership priority rattles the very foundation upon which trust and cooperation are built. This has nothing to do with restricting a free market economy. This has to do with forgetting that people—living, breathing people, those who will play a greater role in our ability to innovate, make progress and beat our competition—are now no longer viewed as our most valuable asset as we aim to compete with the numbers. If anything, prioritizing performance over people undermines the free market economy.

In fact, the more financial analysts who cover a company, the less innovative the company. According to a 2013 study that appeared in the Journal of Financial Economics, companies covered by a larger number of analysts file fewer patents than companies covered by fewer analysts. And the patents those companies do generate tend to have lower impact. The evidence supports the idea that “analysts exert too much pressure on managers to meet short-term goals, impeding firms’ investment in long-term innovative projects.” Put simply, the more pressure the leaders of a public company feel to meet the expectations of an outside constituency, the more likely they are to reduce their capacity for better products and services.