There’s no doubt that the past couple of decades have been tough on most retailers. The Internet brought disruption from Amazon, other online retailers, and the “showrooming” phenomenon. A rocky economy, high gas prices, and an uncertain jobs and political landscape left many shoppers shell-shocked and with tightening budgets.

This year, though, there’s some good news for retailers. Consumers plan to spend almost US$1,200 in 2017 on holiday gifts, travel, and entertainment, up 6 percent from a year ago, according to the 2017 PwC Holiday Outlook. In fact, 83 percent of U.S. consumers plan to spend the same or more this holiday season, according to the survey, which polled 2,395 consumers about their expected spending over the holiday season.

So how can retailers make the most of the holiday spending splurge, when consumers have more places to shop and more ways to find out about brands, products, and services than ever before?

As s+b has noted before, the “typical” consumer is a thing of the past. Companies have to combine a deep knowledge of who is shopping, and when, and where, and why. So, with that in mind, here is a bit of what holiday shoppers are thinking about as they head out, or stay in, to shop this season.

How much shoppers plan to spend and on what and whom varies widely by gender, age, and other factors. For example, compare the rates of shoppers, by age, who plan to spend more this year than they did last year. It’s 45 percent of mature Gen Z shoppers (ages 17–21), whereas for millennials it’s 39 percent. For Gen X, 29 percent of shoppers say they will spend more; it’s 18 percent of baby boomers, and 15 percent of the Greatest Generation. Women say they will spend $1,132, and men plan to lay out $1,254.

When making their shopping lists, consumers overall are putting family at the top, followed by themselves. People expect to spend $680 on family members, $360 on themselves, and $95 on friends. Pet owners also anticipate spending $45 on pets. In terms of generations, consumers over 35 plan to spend more than 60 percent of their holiday gift budget on family, and Gen Z plans to allot the biggest portion of their budget to themselves.

When shopping for others, most respondents said they will be purchasing physical items, such as toys, electronics, and clothing, but the Greatest Generation will be spending the most on gift cards. When shopping for themselves, Gen X consumers and baby boomers are more likely to buy gifts of travel for themselves than the other groups. Boomers and the Greatest Generation will treat themselves to dining and entertainment options far more than any other age groups, the survey found. 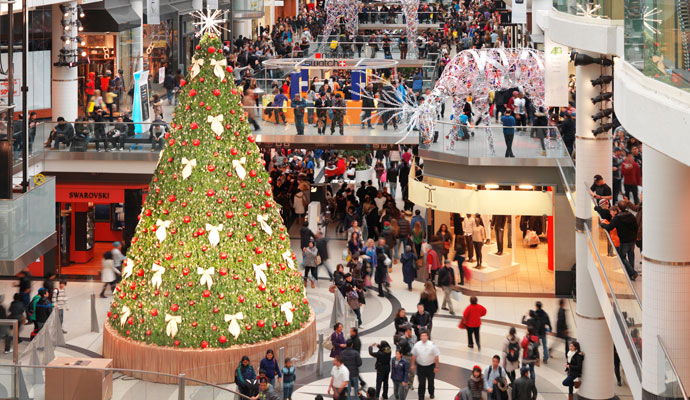 So how are shoppers deciding what they will purchase? And where? For gift ideas, traditional television (62 percent) is still the most popular means by which shoppers learn about presents, followed by traditional word of mouth (48 percent). In third place, and climbing, 35 percent of shoppers turn to social media. One-third of shoppers rely on emails as well as individual retailers’ websites, while 27 percent turn to newspapers.

Facebook, Instagram, YouTube, and Pinterest were the most popular social media platforms for gift ideas, though 36 percent of respondents said that they don’t use any of the platforms for research. Of those who rely on social media, almost three-quarters are more likely to purchase an item if an influencer reviews that product positively and shares discounts on it.

Overall, consumers are splitting their shopping equally between in-store and online, but digital channels continue to gain in popularity. Online shopping is up by 6 percent, while in-store shopping is down by the same amount. The most popular mode for online shopping is still the traditional desktop/laptop, followed by smartphone, tablet, and smart home technology.

So how can retailers make the most of the holiday spending splurge?

What makes a shopper decide to buy? When wooing online shoppers, retailers emphasize free-shipping offers over the holiday season. But consumers have something else at the top of their minds: price. Sixty-three percent of shoppers said that a product’s cost was the most important factor in deciding to purchase; free shipping, cited by 39 percent of respondents, was the second most important consideration. (Just 8 percent said shipping and returns have no impact on their purchasing decisions.) The quality of the product was important to just one-fifth of shoppers.

For shoppers, amid the dizzying number of places to shop, products to choose from, sales to skim through, and crowds to navigate, 57 percent were still able to say, “I enjoy holiday shopping,” though that’s down 4 percent from 2016. And for retailers in this complex environment, it’s more critical than ever to find consumers in the moment, use data to shoppers’ advantage, and deliver an enjoyable experience.