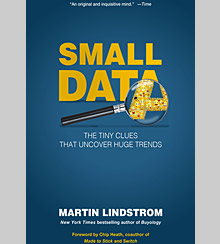 Martin Lindstrom is the Sherlock Holmes of brand consultants. Even as he walks you through the cases in his new book, Small Data: The Tiny Clues That Uncover Huge Trends (St. Martin’s Press, 2016), you can’t help but marvel at his powers of observation and deduction.

Befitting a Holmesian adventure, the first case in Small Data begins with a mysterious call. The interpreter for a Moscow-based entrepreneur is on the line. “The businessman wanted to launch a new business in Russia with the goal of generating at least a billion dollars a year,” Lindstrom writes. “When I asked the obvious question — what was the business? — I was told it was up to me.” Most people receiving such calls would think they were about to be scammed. But for Lindstrom, a self-described  “forensic investigator of emotional DNA” with a global reputation, this was an exciting lead.

“Martin Lindstrom is the Sherlock Holmes of brand consultants.”

Soon after, the investigator, accompanied by two Watsons, is on his way to Russia aboard a private jet chartered by the entrepreneur. They spend a few days in Moscow and then fly 4,000 miles to Krasnoyarsk, a city in Siberia with a population of one million. And here, in the frozen steppes, Lindstrom takes the pulse of the Russian people and tries to identify the billion-dollar business opportunity harbored in their collective psyche.

He does this by mimicking anthropologists. Lindstrom notices that the locals upholster the inside of their apartment doors, that they lack mirrors, that the men stow their toothbrushes bristles-down and the women bristles up, and, most tellingly, that “every refrigerator seemed to have an extravagantly large collection of magnets.” To Lindstrom, this last clue was evidence that Russian parents doted on their young children. And he ultimately recommended that the entrepreneur launch Mamagazin.ru, an online community and e-commerce site aimed at Russian mothers and their children. Mamagazin.ru was a success, Lindstrom reports, until sanctions on imports forced it to close and retrench in 2015.

“The Case of the Refrigerator Magnets” is one of the seven tales in the book showcasing Lindstrom’s methods. Each is fascinating, but each also drives home a lesson that may or may not be intentional: It’s hard, perhaps impossible, for the average marketer to do what Lindstrom does.

Lindstrom strikes those of us who blunder through life as supernaturally sensitive and observant. When he comes across seemingly minute and irrelevant details (like whose clothes are hung where in a bedroom closet), his antennae begin to quiver. He also has decades of assignments under his belt, and each has contributed to a portfolio of insights that he can apply elsewhere. For instance, the sense of community Lindstrom discovered in Siberia informed his recommendations for redesigning a chain of grocery stores in the Southeastern U.S.

Happily, Lindstrom is willing to offer us a guide for building a brand. “Until recently, I never considered what I did for a living as a repeatable methodology,” he admits. “But over the past few years, nearly half a dozen companies have asked if I could distill my methods into a training program.”

Lindstrom outlines the result — the 7C Manifesto — in the final pages of the book. The Cs are collecting, clues, connecting, correlation, causation, compensation, and concept — and each represents a step in the process that Lindstrom follows. He also offers some useful advice for completing each step: In collecting, for instance, remove the internal filters that block your ability to observe clearly. When Pepsi asked Lindstrom to improve the public perception of his favorite soda, he eagerly accepted the assignment. But he also stopped drinking it. “Pepsi — its taste, its bubbles, its cans, its bottles, its advertising — was just too familiar,” he explains. “I had no distance from the brand, no frame of reference about desire, or craving, my own or other people’s. I couldn’t think straight. I couldn’t get inspired. I couldn’t do my job.”

Even with the helpful advice, I doubt that many of us could ever be able to do what Lindstrom does. There is some magic to his work, and some genius, and a lifetime of devotion to understanding how people’s emotions become intertwined with brands. But then, not being able to do what Sherlock Holmes can do has never stopped admiring readers from following his adventures with delight and astonishment. Why should it not be the same with Martin Lindstrom?