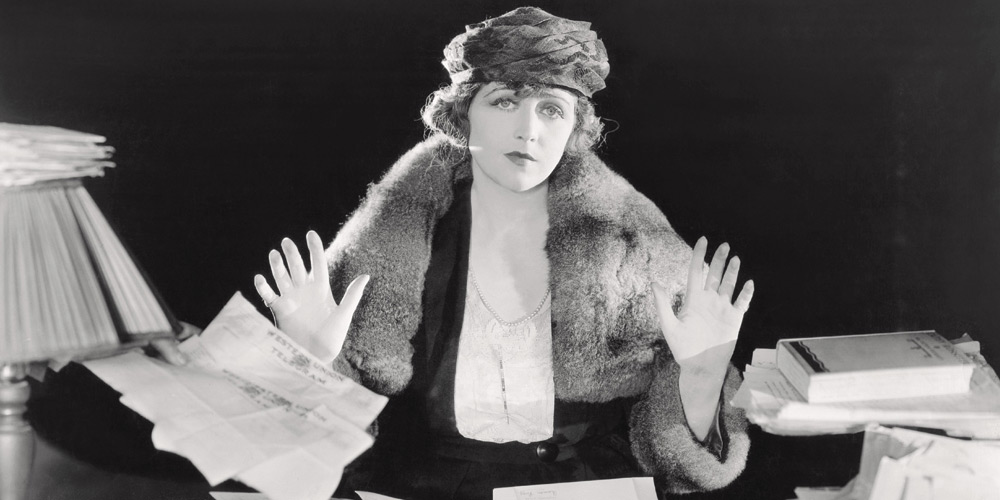 Long before Mary Richards, Murphy Brown, and Liz Lemon, Americans took a shine to another fictional career woman who was tough enough to make her way in a man’s world. It’s a shame that hardly anyone remembers her now.

Emma McChesney, the forgotten forerunner in question, and Edna Ferber, the novelist who created her, both deserve better. McChesney was a fictional single mother who divorced an alcoholic and went to work for the T.A. Buck Featherloom Petticoat Company. When we meet her, she’s already worked her way up from typist to crackerjack traveling saleswoman, covering the firm’s critical Midwest territory, where she was “known to every train-conductor, porter, hotel-clerk, chamber-maid, and bell-boy between here and the Great Lakes.”

McChesney was the star of a series of short stories that Ferber published in magazines, mostly before America’s entry into World War I. In Ferber’s tales, our irrepressible heroine crisscrosses the Midwest for months at a time on miserable third-rate trains in a cloud of cinders and dust, all to make a living for herself and her spoiled son, Jock: “Those ten years on the road! How she had hated them — and loved them. The stuffy trains, the jarring sleepers, the bare little hotel bedrooms, the bad food, the irregular hours, the loneliness, the hard work, the disappointments, the temptations. Yes, but the fascination of it, the dear friends she had made, the great human lesson of it all!”

Though little-read now, Ferber was one of America’s most successful writers in the first half of the 20th century. She won the Pulitzer Prize for her novel So Big in 1925, and two of her other novels, Show Boat and Giant, were the basis of blockbuster musicals and films. She also wrote plays with the Tony-winning George S. Kaufman, including Dinner at Eight and Stage Door.

But Ferber’s success came only after hard times in childhood. Her immigrant father’s business failures, blindness, and early death left the family dependent on her indomitable mother, and the young Ferber also had to cope with anti-Semitism, which drove her family from Ottumwa, Iowa, to Appleton, Wisconsin. These early experiences proved formative. Bigotry and the social distinctions of class and ethnicity became powerful themes in her work, and she tackled serious social issues at a time when few others had the guts or inclination to do so.

The Emma McChesney stories were collected between 1913 and 1915 in three volumes called Roast Beef, Medium; Personality Plus; and Emma McChesney and Co. (One or two later stories appear in other collections as well.) All are out of copyright and therefore available as free downloads. It’s also fun to look at digitized versions of the originals in the American magazine online archive. And for those who prefer their books as physical media, the University of Illinois Press keeps them in print. I just read the lot of them and can attest that the stories are engaging, moving, and great fun, if a bit hokey now and then. McChesney is one of those unsinkable wisecracking female superheroes who saves the business, is effortlessly attractive, and always knows better than a man.

McChesney’s travels and travails vividly dramatize the issues women faced — and still face — in the world of business. On the road, our heroine quickly becomes expert at fending off aggressive suitors and finding diversion in provincial burgs where the vaudeville is excruciating. “Evenings I go up to my room and sew or read,” she says at one point. “Sew! Every hook and eye and button on my clothes is moored so tight that even the hand laundry can’t tear ‘em off. You couldn’t pry those fastenings away with dynamite.”

Today’s road warriors, bellyaching about the legroom in coach, will find themselves chastened by Emma’s experiences, which sometimes involve sleeping in a corridor. And not even the weekend brings much relief. “To a working woman, Sunday is for the purpose of repairing the ravages of the other six days. By the time you’ve washed your brushes, mended your skirt-braid, darned your stockings and gloves, looked for gray hairs and crow’s-feet, and skimmed the magazine section, it’s Monday.”

These road years are lonely for McChesney. At a hotel one night after supper, “she passed through the lobby on her way upstairs. The place was filled with men. They were lolling in the big leather chairs at the window, or standing about, smoking and talking. There was a rattle of dice from the cigar counter, and a burst of laughter from the men gathered about it. It all looked very bright, and cheery, and sociable. Emma McChesney, turning to ascend the stairs to her room, felt that she, too, would like to sit in one of the big leather chairs in the window and talk to someone.”

Unfortunately, the men are all too ready to make assumptions about McChesney, who is not just alone, but alone and attractive. Unsavory potential suitors are everywhere, and she develops, by experience, a sixth sense about married men. One night, faced with yet another dubious invitation for a drink, her patience wears thin: “Say, what do I look like, anyway?” she snaps. “I guess I’ll have to pin a white ribbon on my coat lapel.” (The white ribbon was the symbol of the Women’s Christian Temperance Union.)

McChesney is well aware of the different rules that govern men’s and women’s behaviors in the workplace. In fact, at one point a rival tries to get her fired by casting aspersions on her morals. And her new boss, the son of the firm’s always supportive founder, subjects her to a clumsy test when she’s back at headquarters in New York by offering dinner, a fur coat, and a ride in the country. Emma, letting him take her hand, calmly cuts him to ribbons: “If I were to tell you how the hand you’re holding is tingling to box your ears you’d marvel that any human being could have that much repression and live. I’ve heard of this kind of thing, but I didn’t know it happened often off the stage and outside of novels. Let’s get down to cases. If I let you make love to me, I keep my job. Is that it?”

Furious, she heads for the door, secure in the knowledge that her hard-won savings — “my cyclone-cellar,” she calls it — has freed her to turn her back on anyone. As it turns out, T.A. Buck, the younger, is a good guy after all. Readers in the #MeToo era will be aghast to learn of their later budding romance, but anyone who thinks McChesney lacks power in their relationship (or any other), hasn’t been reading closely.

If life as a traveling salesperson made Willy Loman into a tragic figure, it made Emma McChesney into a philosopher — one who never feels sorry for herself, because she can’t afford the indulgence. “I’ve had to fight for most of my happiness,” she says, adding: “I’ve always had to dig for it with a shovel and a spade and a pickax, and then blast. I had almost twenty years of that — from the time I was eighteen until I was thirty-eight. It taught me to take my happiness seriously and my troubles lightly.”

It all ends well for Emma. She straightens out her son with a little help from T.A. Buck — and by taking him on the road. Later, when Jock launches a business career and complains that the young woman he’s courting gets paid twice what he does, McChesney is unmoved. “It’s been my experience,” she observes, “that when a firm condescends to pay a woman twice as much as a man, that means she’s worth six times as much.”

It’s been my experience that when a firm condescends to pay a woman twice as much as a man, that means she’s worth six times as much.”

McChesney eventually makes herself indispensable and even comes to own a piece of the Bucks’ business. Yet T.A. can’t help feeling protective, even suggesting that being a “drummer” (a traveling salesperson) isn’t suitable for a woman. “If it’s no work for a woman,” Emma fires back, “then I suppose it follows that I’m unwomanly. For ten years I traveled this country selling T.A. Buck’s Featherloom Petticoats…. I’ll never forget that first trip — the heartbreaks, the insults I endured, the disappointments, the humiliation, until they understood that I meant business — strictly business. I’m tired of hearing you men say that this and that and the other isn’t woman’s work. Any work is woman’s work that a woman can do well.”

McChesney’s grit won the character legions of fans. No less a figure than Theodore Roosevelt, running for president in 1912 as the Bull Moose candidate, offered his firm opinion that McChesney should marry. When she finally does, T.A. gets her to try taking three months away from work to see if she’s content as a woman of leisure. She finds life without work maddening and strangely exhausting: “I’ve never been so tired in my life — not even when we were taking January inventory.”

At one point, when Buck is worrying and harrumphing about McChesney’s plans to take a new line of knickerbockers on the road, she simply says, “I’ll get the Twentieth Century,” referring to the famous train. Little did she know, she’d get the 21st as well.