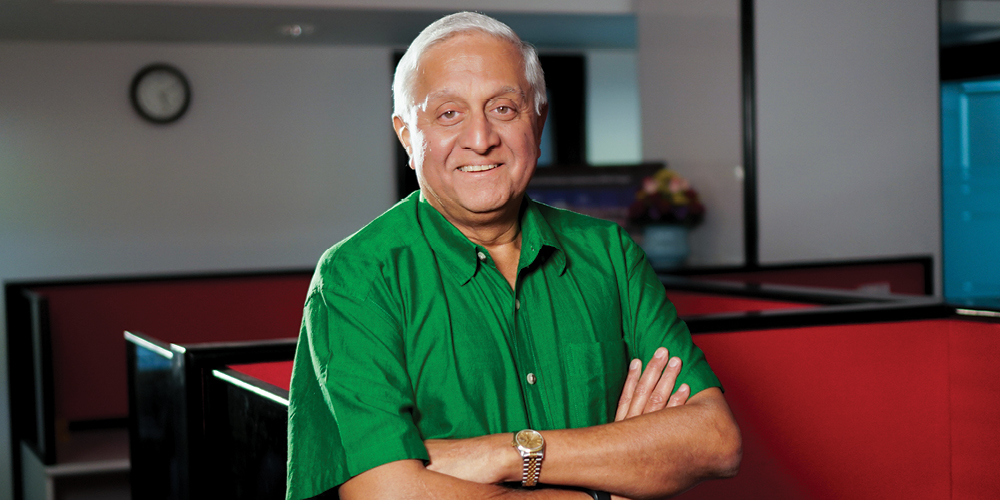 As a business strategist and writer, R. Gopalakrishnan has devoted his work to studying ethics, leadership, and human capital. He began his 31-year-long career at Unilever’s massive, idealistic India business, and then became a board director at the even more massive and idealistic Tata Group, where he was head of Tata brand and strategy for almost 18 years. Along the way, Gopal (as he prefers to be called) developed the idea at the heart of his new book, Doodles on Leadership: Experiences Within and Beyond Tata. He says that business professionals, as they proceed through their career, rise through three levels of leadership: transactional, where they deliver functional results; corporate, where they coordinate functions; and holistic, where they engage fully, on behalf of the business, in addressing broad-based, long-range issues.

Recently, strategy+business caught up with Gopal to talk about his view of holistic leadership. To him, the goal of a leader should not just be to achieve results. It should be to create and shape an influential institution: a business as significant to its community as Tata has always been.

S+B: Your book’s core idea — that great leadership is “holistic,” which means it tackles difficult problems with strategic intent — suggests that executives in India and elsewhere have a huge potential for influencing society’s development.
GOPAL: Yes. Transactional leaders are concerned about technical issues. How are you going to manage functions like finance and marketing? At the corporate level, managers have to put all the pieces of an enterprise together when there are conflicts and tensions.

Then we get to the holistic level. The holistic leader asks, “How does my company fit into the society and the community, and with government?” In a project I’m involved with at Mumbai’s S.P. Jain Institute of Management and Research (SPJIMR), we are studying the question: What is the holistic leader’s role? We believe he or she is the shaper of an institution that is an integral player in society.

S+B: What do you mean by an “institution”? Is that just another word for “large business”?
GOPAL: Not really. It is an organization that has been strengthened with long-life attributes — with structures, systems, processes, people, and talent — to make a sustained contribution to the world at large. The leader must continually shape the institution, and in the process, help keep it from being corrupted or overreaching. Even a well-built house won’t stay forever that way unless the institution is committed to it.

A competent business leader is like a very good mason, who piles bricks and builds a wall. A shaper has a much grander design in mind.

That is distinct from a company, which is [made up of] just a bunch of transactions. The leaders just want to make it a little more efficient than [it was] when they started. The leaders of an institution, by contrast, want to be capable of much bigger things. America had leaders of this sort at the end of the 19th century: Andrew Carnegie, John D. Rockefeller, and Henry Ford created great institutions.

S+B: And were accused, sometimes justifiably, with being exploitive competitors.
GOPAL: These original shapers were not perfect. They did a lot of things that we would find fault with. But on the whole, what they did to advance the U.S. was phenomenal. And the effects, in terms of institutional influence, have also been phenomenal.

S+B: You’re studying institutional influence at SPJIMR?
GOPAL: We picked six organizations in India to study. They are the HDFC Group, Tata Consultancy, L&T [Larsen & Toubro], Kotak [Mahindra] Bank, Biocon, and Marico. Each has a chief executive who we think of as a shaper: a holistic leader with very high aspirations for the company and its place in the world around it. These six individuals come from completely different backgrounds. But they seem to have some very interesting common qualities: attention to talent and an ability to focus on the long term in addition to the short term. They’re absolute hounds for detail, but they can also see the larger picture.

It’s fascinating to hear stories of their ability for integrative thinking.  When presented with two options, they push back and choose a third one.

S+B: Why do you use the term “shaper”?
GOPAL: I was influenced by the metaphor of a bricklayer as distinct from the guy who builds a cathedral. A competent business leader is like a very good mason, who piles bricks and builds a wall. A shaper has a much grander design in mind.

S+B: Are you saying that the institution’s competitive advantage has more to do with its long-term identity than with its immediate profits?
GOPAL: This concept of leadership represents an evolution of business management ideas that go back to the practice of cultivated agriculture. Ten thousand years ago, people lived in the forests and ate what they found there. Nobody grew their food.

Cultivated agriculture represented the beginning of humankind’s quest for efficiency and repeatability. If I plant seeds every year, I know I will reap crops. And if I do a few other things, I’ll get more crop per acre.

But what is efficient in a farm is not necessarily what is effective in a rain forest. We assume them to be the same, but they are two separate things. This concept comes from a very good book called The Rainforest: The Secret to Building the Next Silicon Valley, by Victor W. Hwang and Greg Horowitt. Effectiveness and creativity go hand in hand. And the reason why large organizations suffer from — or believe they suffer from — lack of innovation and creativity is because they’re focusing too much on efficiency and not enough on effectiveness.

Shapers are business leaders who have learned to pursue both goals. They are running enterprises like cultivated agriculture, with the ideals of the rain forest. That is the basic principle that’s emerging from the interviews we’ve done so far.

S+B: Why is it so important that shapers operate through institutions?
GOPAL: So that the ability to be a holistic leader is not just in one person. So that at least for some time after they are gone — not forever — the show can carry on. The institution will be capable of making decisions that sustain its identity, contribution, and value over the long run.

S+B: What do you think of the startups emerging today — like the unicorns and startups in India? Are they building holistic institutions?
GOPAL: The outcome is yet to be seen. Some of them are trying to influence society for the better. But I don’t know if they will institutionalize it. For one thing, it isn’t clear whether they can do it profitably. It’s easy to make one electric vehicle. Can you make 100,000 of them and bring them to market?

I don’t think we know yet how many of these enterprises — even the largest ones — will sustain themselves. It isn’t enough to start a company. You have to keep shaping it into an institution, and that takes you on a long journey.