I’ve been enjoying Marty Sklar’s memoir Dream It! Do It!: My Half-Century Creating Disney’s Magic Kingdoms (Disney Editions, 2013). Sklar is a legend in the Walt Disney Company (literally) and among Disney aficionados worldwide. He joined the company as a summer intern in the public relations office in 1955, a month before Disneyland opened. After graduating from UCLA in 1956, he returned to Disney as a full-time employee and stayed until his retirement in 2009. Sklar spent most of his career in Walt Disney Imagineering, the company’s design and development subsidiary, and served as its president from 1987–1996. 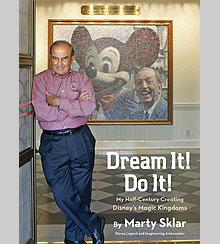 Dream It! Do It! reveals that Sklar was also Walt Disney’s go-to ghostwriter for much of the last decade of his life, and it provides a firsthand description of Walt’s leadership style during that momentous period in the company’s history. When Sklar joined the company, Walt was a veteran leader who had made a big bet: He was launching a new, unproven business that most everyone predicted would be a flop, including his own brother Roy, who held the purse strings at Disney. When Walt pitched him the idea for Disneyland, he refused to back it. Walt forced Roy’s hand by forming a new company and financing the planning on his own. Eventually, Roy relented. It was a smart decision: In 2012, Disney’s parks and resorts business generated US$12.9 billion in revenue.

Sklar portrays Walt’s leadership style as demanding and sometimes rough. He routinely kicked back work he found unacceptable without offering any guidance on how to improve it and only gave praise begrudgingly. When one of the Disney Studio’s TV producers asked Walt for an E for effort, he replied, “I’ll give you an S for shit.” Yet Sklar says Walt was a “master motivator.” He resolves this apparent contradiction by explaining that Disney believed the “praise was in the product” (in other words, that the customer’s satisfaction was more than enough recognition), that he rewarded a job well done with a more challenging job, and that he truly cared about his employees, as demonstrated by his concern for their personal lives. Based on the high regard with which Walt Disney is held by the people who worked for him, these qualities did the trick.

Another notable aspect of this memoir-cum-business book is Sklar’s discussion of how language was used to differentiate Disneyland in the marketplace. Back in 1957, the wordsmith renamed Disneyland’s rides “attractions” and described them as “adventures” or “experiences” as a means of distinguishing and distancing the theme park from its less reputable ancestors—the carnival and the amusement park.

I know from the book I worked on with Disney Institute that this idea spilled over into the performance language that is still used in the parks today: Employees are cast members, customers are guests, a uniform is a costume, and any place customers are present is onstage. This has proven to be a highly effective means of communicating and maintaining the high service standards for which Disney is justly famous. The power of words, right?