As I recall, the Internet was supposed to render location irrelevant. Pioneering dot-com entrepreneurs, as well as more than a few investors, saw the online world as flat and filled with an endless supply of customers. Of course, many of these dot-coms became dot-bombs. 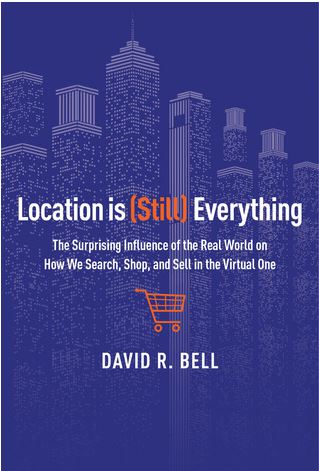 The bursting of the Internet bubble in 2000 has often been blamed on what then Fed chairman Alan Greenspan described as “irrational exuberance,” but that’s only one part of the story. In a new book, David R. Bell, the Xinmei Zhang and Yongge Dai Professor at the Wharton School of the University of Pennsylvania, suggests other reasons for the bust, reasons that should concern anyone with an interest in online commerce. The book doesn’t address the bubble directly, but it does deflate the idea that underpinned much of the exuberance in the second half of 1990s—that the Internet is always a flat, friction-less marketplace.

“The virtual world is flat in terms of the opportunity it delivers to all of us, but it is not flat in the way that we use it,” writes Bell in Location Is (Still) Everything: The Surprising Influence of the Real World on How We Search, Shop, and Sell in the Virtual One (New Harvest, 2014). “Because the way we use it to search, shop, and sell depends on where we live in the real world, which is anything but flat.” If you have a baby, for instance, and you live 10 miles from a drug store, you are going to be a lot more likely to buy diapers online than if you live across the street from a drug store.

“The virtual world…is not flat in the way that we use it.”

This may seem obvious, but according to Bell, very few online businesses fully consider the geographic factors that can make or break them. Among these factors are resistance, adjacency, vicinity, and isolation.

Resistance is the level of difficulty that customers encounter as they buy products and services. There are two kinds: questions regarding where you might buy something are called geographic frictions, and difficulties that customers encounter in making purchase decisions are called search frictions. Furniture e-tailers, for example, had a lot of difficulty with search frictions at one point: It turned out that people wanted to sit on a couch before they bought it.

Adjacency is the direct proximity of customers to each other. This matters because “most people live in locations that contain neighbors who are similar to them in key ways.” We flock to stores—both online and offline—because our neighbors tell us about them or because we see them buying from stores and we simply copy them.

Isolation is an extreme form of geographic friction in which the preferences of a small minority of customers are not being satisfied locally. Bell, a New Zealander who lives in Philadelphia, says he can’t find Vegemite locally. That’s “preference isolation,” and, often, it represents a demand niche that an online seller can profitably fill.

Although Location Is (Still) Everything is worth the read, I doubt you can use it as how-to guide for building a business plan. Bell takes a stab at tying the concepts he describes into a framework that online businesses can use to get location working for them, but it’s not as powerful as his thesis—that geographic factors play an essential role in online success. A thesis, by the way, that may offer some insight into why Amazon (parent company of New Harvest, the publisher of this book) is busy building 300,000-square-foot “sortation centers” that will cut its shipping times, and why Jeff Bezos is dreaming of fleets of delivery drones.

Nothingness at the top of the heap
Abraham Cahan’s underrated classic, The Rise of David Levinsky, offers a portrait of success and solitude in the dog-eat-dog world of the garment trade.
by Daniel Akst