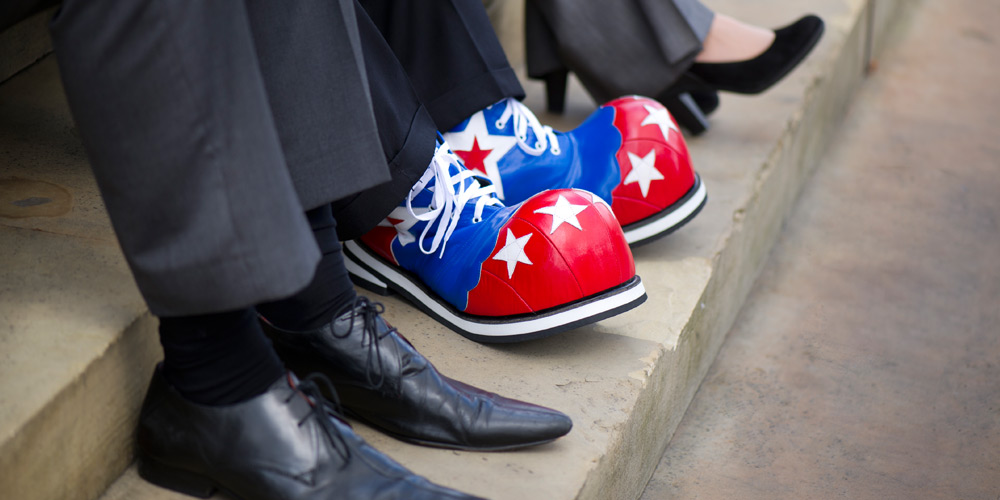 A business executive and a comedian walk into a bar. This isn’t a setup for one of those jokes, not least because I am terrible at telling jokes. No, an executive and a comedian sitting down for a drink or two is actually a setup for a really useful conversation about creative leadership and problem solving. There’s a lot that comedians — or, as Peter McGraw calls them, “the world’s least-professional professionals” — can offer to business leaders: “By emulating the funniest people,” he writes in his new book, Schtick to Business, “you can craft a better career and a smarter business.”

McGraw isn’t suggesting that to be a better manager or leader, you need to be funny; being funny is hard to do and likely to backfire, so don’t try it at home. Rather, based on what he’s seen both in his lab — the Humor Research Lab at the University of Colorado, Boulder, also known as HuRL — and in the real world, McGraw has come to believe that understanding how comedians do their jobs can help managers and leaders be better at theirs.

For a start, comedy is an industry, and its product is laughter. That implies there’s a process to creating comedy. But what makes people laugh is, of course, a moving target. Finding that target is, in a lot of ways, like solving a puzzle whose parameters are always changing — a challenge that should sound familiar to anyone trying to navigate business (and life in general) right now. Being a comedian takes a certain amount of natural talent, but it also takes practice and an arsenal of cognitive tools that business leaders could learn to use.

In 2010, McGraw and a colleague published a paper positing what he calls the “benign violation” theory of comedy. Humor, he says, is found when a violation (whether it’s of social norms or laws of physics) intersects with harmlessness, or at least acceptability.

This premise of incongruity is what keeps people watching America’s Funniest Home Videos — now in its 30th season of accidental falls and deliberate pranks; and it’s also why people laugh when Chris Rock says, “I love being famous. It’s almost like being white, y’know?” Getting to that sweet spot of unexpected contrast requires a way of thinking, McGraw says, that business leaders should try.

For a start, comedians employ a framework in which making associations between disparate, typically incompatible elements is rewarded. This can be and frequently is taught — in improv, stand-up, and comedy writing classes. And it can be harnessed: A 2011 MIT study examining the link between, as the article title put it, “haha” and “aha!” found that people who participated in an improv workshop before a product brainstorming session increased their idea output by 37 percent. Though that could imply that people who are naturally funny are simply more creative, it turns out that it’s not so much what comedians think, but how.

People who participated in an improv workshop before a product brainstorming session increased their idea output by 37 percent.

After they identify a crack or a problem, though, comedians aren’t tasked with solving it. But perhaps they should be. Studies consistently demonstrate that people who score highly on “sense of humor” scales also score well on creative scales; they also show that comedians perform better than other people on tasks that involve creative thinking. This makes sense: “Both humour and design creativity require a person to think from different perspectives, and make connections between seemingly unrelated ideas and concepts,” University of Strathclyde researchers pointed out in a 2019 article on using humor processes in engineering.

Managers and leaders don’t need to make fun of those cracks, but being aware of them could help them craft a better product or service, carve out a space in an industry, improve organizational performance, or even effectively lead a team that’s having problems.

How comedians frequently build jokes is also useful to spur creativity. As noted above, many good jokes hinge on upending expectations. The comedian sets it up, knowing where the audience thinks the story will go, and then purposefully veers off course, to make a surprising association. Henny Youngman, known as the King of the One-Liners, excelled at this: “My grandmother is over 80 and still doesn’t need glasses. Drinks right out of the bottle.” Or how about: “If my mother knew I did this for a living, she’d kill me. She thinks I’m selling dope.” Or: “You can’t buy love, but you can pay heavily for it.”

The most obvious business application of this approach is in advertising. For example, back before Listerine went minty, it turned its antiseptic, medicinal flavor into a selling point: “The taste you hate, twice a day.” And of course, Marmite has been running its “You’ll either love it or you’ll hate it” campaign for more than 20 years. In those ads — and many others — companies took a flaw and turned it into a centerpiece, playing on consumer expectations.

A 2013 study, also from the University of Strathclyde, found that brainstorming sessions structured on models that comedians use to craft jokes helped people who weren’t professionally funny produce more — and more original— ideas. In his book, McGraw offers a brainstorming hack that he calls “sh*tstorming”: coming up with ideas so unexpected that they wouldn’t usually even get a chance to be shot down because they wouldn’t be uttered. It’s fun, but it also gives those “so crazy it just might work” ideas a chance; at the same time, it forces us to confront our own status quo bias, one of those tricky cognitive quirks that we all suffer from and that keeps us doing the same thing.

Status quo bias is particularly dangerous right now, in this chaotic climate. But comedy thrives on chaos. “When something bad happens to a comedian, you know what they say? ‘Oh, this is going to make a great bit,’” says McGraw. Thinking like a comic — seeing an opportunity in constraint — can help. Constraints, he notes, “make us work harder on a solution…because they crowd out a whole bunch of solutions that you would have considered automatically.”

But perhaps the biggest lesson comedy has for business is a shift in how we think about business. Comedy is obviously creative. But in less obvious ways, so is running a paper manufacturer or an insurance company or a business that researches innovation in algae farming. “What is the definition of creativity? I call it, ‘to come up with an appropriate original solution,’” says McGraw. “That’s essentially what’s happening in all these spaces: You have a bunch of problems; you’re trying to solve them in a bunch of novel ways, better ways.” And thinking like a comedian might even be — dare we say it? — fun.