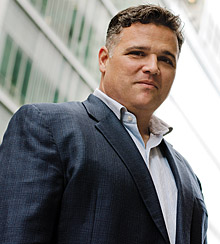 As budgets tighten, many executives face questions about how to grow their business. In the booming world of e-commerce, such questions are coupled with a need to stand out from the crowd. Entrepreneur Jim McCarthy has been on the front lines of these decisions for 15 years. He cut his teeth in tech startups, learning from both failures (online calendaring venture Kiko Inc.) and successes (GeoCities, sold to Yahoo in 1999). Today, as cofounder and CEO of Goldstar Events Inc., a privately held half-price ticketing website, he’s found answers by forging a strong connection with the site’s members. Getting to know his customers — what they like, what they dislike, and what they might like — is key to Goldstar’s business model, and drives its innovation process.

When the startup launched in 2002, the economy was in recession and e-commerce was still reeling from the dot-com bust. Today, Goldstar has more than 2 million registered users and has established partnerships with thousands of venues around the country. Although relatively small — the company sold about US$50 million in tickets in 2011 — it is growing rapidly, and forecasts that its sales will grow by more than 50 percent this year. Jim McCarthy talked to strategy+business in February 2012, Goldstar’s 10th anniversary.

S+B: You’ve worked in e-commerce for 15 years, and have seen highs and lows. What are some of the key lessons you’ve learned?
McCARTHY: One of the things that I’ve come to believe strongly is that many people claim to have expertise in a lot of areas, but the entrepreneur is in the best position to evaluate what works or doesn’t work for his or her company. Great people can be very helpful to you, but they can’t replace you as the entrepreneur when it comes to the big decisions.

You also can’t be taken in by things just because everybody is doing them. Otherwise, you risk pouring huge amounts of money into efforts that won’t work.

I’ll give you an example, based on something we learned about Twitter. Our first implementation of Twitter was traditional; followers could interact with us, and we would editorialize. That account is still active, and it’s fine. But we figured out that many heavy Twitter users just want information. We created automated feeds for different cities, such as @GoldstarLA. Nobody here touches them, we just take the data as a new event or new dates for events come onto the site, and it automatically goes into the feed for each city. Users can sign up for a feed for their city, and every time there’s an update on our site, they get a tweet with a link. Those are great links for generating ticket sales, and it’s very easy. We realized that we didn’t have to hire a team of people to fill @Goldstar with crazy, fun content.

I think the bigger point is, it’s possible that not using Twitter would work for a given company. That’s not to say that you shouldn’t try things or test things or explore things, but entrepreneurs should have the courage of their convictions about what they’ve learned. It’s hard to do that in the face of pressure, and if you have investors, they can put pressure on you, too. You have to resist it and do the things that are best for the company and for its customers and employees. You can constantly chase whatever’s shiny, but entrepreneurs only have so much mental bandwidth, so you have to use it in the right places.

S+B: What drives your decisions about innovation and growth?
McCARTHY: Innovation is really only innovation if it serves a need that customers have or gives them something they want. Our job is not to find buyers for our tickets, it’s to find tickets for our buyers. Our innovation process revolves around evaluating what we’re doing for our members and then figuring out what we’re not doing as well as we could be. Sometimes those kinds of innovations are really simple and other times they’re more technical. But they always start with the customer.

For example, early in our business, we started sending out an e-mail to buyers after the event they purchased tickets for had happened, to see how it went. We were the first company I know of to do this. We wanted to make sure that people were having a good experience, and if there were problems, we wanted to get that feedback. It was a very simple innovation, but it was new and it helped us add value for the customer.

We have more complicated innovations, like our “Sit with Friends” feature. One of the issues people encounter when they want to go to an event with friends is that one person needs to buy all the tickets so the group can sit together. Otherwise there are no guarantees. We built “Sit with Friends” to solve that problem. If you buy a ticket from us, we provide a link at the end of the process that you can then send to friends. When those people buy tickets through that link, your seats are automatically grouped together. That was an innovation that came out of talking to our customers about their frustrations. For us, innovation is a constant process of saying, What are we doing to help improve the member experience?

S+B: You serve a diverse customer base. How do you get to know your members?
McCARTHY: User reviews are one of the most important things that people do on our site. We did a study a couple of years back that basically asked, Would you trust user reviews on a website that you like, or the most well-known critic in the biggest newspaper in your city? And which source would you trust if they had a difference of opinion about a show? The result was something like 30 to 1 valued the reviews on a website they liked over the critic. Because you need to buy a ticket to write a review, users shouldn’t have to wonder, “Who’s writing this review? What’s their agenda?” We’re poring over the data on a daily basis, asking ourselves, What’s working, what’s not working, what are people experiencing that we can address? Every now and then I’ll go work in our customer service queue to connect with our customers directly.

We know that people like to go to live entertainment more than they actually go to live entertainment. The “science” behind what we do is figuring out why, and then trying to break down those barriers. One of the mistakes that many of our potential competitors make is thinking that price is the single barrier, when in reality it’s one of several (and not the most important). We use algorithmic solutions to take into account what events our members have looked at, what they’ve attended, and what they have said about these events. We analyze how they respond to e-mail, what kinds of offers work for them, what kind of information they are searching for. Their behavior begins to tell us more about them, and hopefully we’re adjusting with each new insight. People don’t always know what they like until they see it. There are some things they know they want, but there are other things they’re open to the discovery of. That’s what we try to find out.

There’s a meeting I have with every new employee that we call Goldstar 101. One of the things that I do is show them a picture of a Sony Xperia — a really sleek smartphone. And then I show them a Sony transistor radio from 1957, which looks crude and old-timey. The point I make is that Sony had a goal back then, which was to improve people’s lives through technology. And even though these devices are really different, they’re both still designed to achieve that same exact goal. If Sony tried to achieve that goal in 2012 with a transistor radio, it would be impossible. Being consistent with a strategy over a long period of time means the tactics have to constantly change to match where the world is.

S+B: That’s a great segue. When you launched in 2002, the economic climate was challenging at best. What impact did that have?
McCARTHY: It was a tough economy, and it was just after 9/11, which added uncertainty. It was also a time that tech investors still refer to as the “nuclear winter”:  After the dot-com boom had gone bust, the exuberance and enthusiasm vanished. Goldstar’s cofounders, Robert Graff and Rich Webster, and I had been working in e-commerce for several years. We believed that whether there were going to be crazy IPOs or frothy valuations from investors or not, the only direction that actual Internet usage could go was up, and up fast. We had this idea that the ticketing business was perfect for e-commerce. There was expiring inventory, but with the Internet and e-mail and the ability to customize, we knew that we could reach a lot of people.

On the one hand, the easy money wasn’t there. It would have been really difficult to raise money for a consumer concept at that time. On the other hand, the recession cleared the field for us, in a way. Because there wasn’t a ton of competition. It gave us a couple of years to build momentum.

In a time like that, if you say, “I’m going to start a business,” a lot of people around you will reply, “Wouldn’t it make more sense to just play it safe, get a job in a big company, and wait this out?” From my point of view, however, a recession is often the perfect time to start a business, depending on what you have in mind. It was a disadvantage in that generally everybody was a little more pessimistic, but recessions also create a lot of disruption, and they kill off some weaker businesses that are doing things in an outmoded way — and that creates all kinds of opportunities.