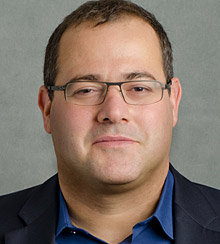 When the global economic crisis took hold in 2008, a central concern among economists and officials was contagion: the idea that the failure of one company (or one sector of the economy) would spread to others like an infectious disease. This type of risk is familiar to people who study financial events, but until recently little light had been shed on how to most effectively recognize and, thus, address it.

Such was the purpose behind groundbreaking research by Efraim Benmelech, an associate professor of finance at the Kellogg School of Management. Together with Nittai Bergman of the MIT Sloan School of Management, Benmelech has demonstrated that an effective response to a financial crisis begins by understanding its roots: Was it caused by a systemic shock that simultaneously hit everyone in the sector (be that defined by industry or geography), or did it originate with a single, company-specific malady—a contaminant?

The associate professor of finance at the Kellogg School of Management discusses the life cycle of a financial crisis.

Focusing on the airline industry, Benmelech and Bergman devised a method for pinpointing the origins of major financial events and, thus, giving direction to the most effective remedy. Their work also informs how companies can shield themselves from the worst effects of a financial outbreak. Their research won the Journal of Finance’s annual Brattle Prize, given for the best paper in finance, in 2011.

Before his academic career, Benmelech served briefly as a junior economist at the Israeli Ministry of Finance, which sparked his interest in debt and credit markets. Since completing a Ph.D. at the University of Chicago’s Booth School of Business in 2005, he has studied bankruptcy, corporate finance, and financial distress, among other things. He has won numerous awards, including the 2004 Lehman Brothers Fellowship for Research Excellence in Finance and the Review of Corporate Finance Studies Best Paper award in 2012.

He talked to s+b about the genesis of financial contagion and how companies can best protect themselves.

S+B: What did your research add to what is already known about the risk of financial contagion?
BENMELECH: We were able to make a case for a causal effect.

Let me begin by talking about contagion and the empirical challenges that are involved in understanding it. Contagion begins with an entity facing some form of financial difficulty, even a bankruptcy. The effects are not isolated to the firm, but spread out and cause financial distress among other companies that are associated with it—they could be suppliers, customers, bankers. They are often competitors.

But not all financial disruptions are driven by contagion, and once a crisis has happened, the cause is not immediately obvious. This is the main difficulty we have whenever we deal with the empirical evaluation of contagion: How can we tell whether this is real contagion in which one country or one firm is causing the distress or it is just a reflection of a bad situation, a bad jolt that has affected everyone?

There is a huge difference between the two. Where there is contagion, we can—potentially—help one sick firm, and, by doing that, help heal other firms. In the second case, a broader remedy is required—for instance, a major policy intervention.

Let me be more specific about contagion by drawing on our research of the airline industry. Let’s say for the sake of argument that Airline One is flying only Boeing aircraft. Airline Two flies two types of aircraft, Boeing and Airbus. Airline Two has issued two bonds. One is secured by Boeing, and the other is secured by Airbus.

Now there is a disruption within the industry: Airline One files for bankruptcy. As it quickly attempts to restructure to a scaled-down enterprise, Airline One’s managers begin to sell off aircraft. When you sell a lot of assets on short notice, the prices are going to drop. Hence, this is going to affect Airline Two. For the bonds issued by Airline Two that were secured by Boeing and, thus, overlapped with the aircraft of Airline One, we will see the credit spreads grow. But we won’t see a change in the credit spreads of Airline Two’s other bonds, which were secured by Airbus, the aircraft not used by Airline One.

So how do we know that the effect on Airline Two is driven by Airline One and not by an industry-wide shock? Because only the bonds secured by the same aircraft as those being sold by Airline One have seen their credit spreads increasing.

In our analysis, we look at the two types of aircraft bonds that were issued by Airline Two. We differentiate between how much each bond overlaps with the fleet of Airline One. There we can identify contagion. If both types of Airline Two’s bonds were similarly affected, it would be an indication that larger forces were causing the industry disruption and that Airline One’s distress was not the cause of Airline Two’s.

S+B: Are there particular sectors in which we’re more likely to see contagion occur?
BENMELECH: Industries in which there are a lot of networks and industries that share the same types of assets are industries in which you might have contagion. The more connections—the more business that occurs within the industry, the more the firms depend on one another—the more potential for contagion you have.

S+B: The 2008 crisis is still very much on people’s minds.  Would you say that’s a clear example of contagion in the banking sector?
BENMELECH: The whole reason that people are concerned about banking is contagion. Banks make loans to one another, and if one bank collapses it could lead to the collapse of another bank and potentially the collapse of the sector. This is why people were so worried about the collapse of Lehman Brothers. Other financial institutions had made loans to Lehman Brothers or had securities insured with Lehman. Once the value declined, they had to sell them, and then the value of the collateral fell further and then more banks failed.

In the Great Depression, many banks failed, and they failed in a domino pattern. In 2008, banks were failing, but the domino effect was smaller because we had more regulation and more intervention in place. But it’s still a major concern.

S+B: If contagion spreads across industries like a disease in the body, can a company immunize itself against it?
BENMELECH: It’s not exactly that a company can immunize itself completely, but it can definitely take steps to avoid having a weak immune system. The strength of a company’s immune system is directly tied to the amount of debt it has.

When there is a lot of debt, the immune system is weak. And when there is less debt and more cash, the firm is more resilient. If you think about a contagious disease, the disease spreads most easily to people with weak immune systems.

S+B: It seems sort of obvious that a company (or a person) shouldn’t take on too much debt. Why have these situations occurred?
BENMELECH: In fact, it’s not clear that firms should not take on a lot of debt. Debt is not as negative as some people try to portray it; it is actually very useful. Why do firms have debt? Some firms need to invest in capital and may not see the profits until a few years later. If they have fantastic projects and good ideas, why shouldn’t they take on debt? That’s the only way in which one can grow and invest. We need debt.

All firms will have debt, but they need to get the balance right. What’s the optimal level of debt? No one knows. Economics is not only about giving numbers; it’s also about describing trade-offs. Companies must weigh the value of debt against the need for strong immune systems. Our research helps lay out the issues for consideration.

Topics: academics, banking, economics, finance, insurers, young profs
Get s+b's award-winning newsletter delivered to your inbox. Sign up No, thanks