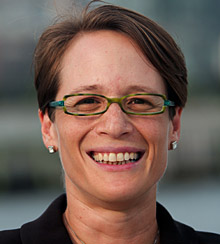 Big Oil seems like an odd place for a social responsibility and environmental sustainability advocate to pursue her career, but after Christine Bader heard then CEO of BP John Browne speak at Yale, that was exactly where she went. Browne’s strong message about the social responsibility of corporations—a highly unusual statement from the leader of a major energy company in 1998—intrigued the first-year MBA student. It prompted Bader to intern with BP’s chief policy advisor and then to join the company full time in 2000. Over the next eight years, she was assigned to the development of a natural gas field and plant in West Papua, the planning of a massive ethylene production complex outside Shanghai, and finally BP’s London headquarters—“an MBA working on social issues in a company of engineers,” as she puts it.

In 2006, BP enabled Bader to work part-time, on a pro bono basis, with Harvard professor John Ruggie, who had been appointed by Kofi Annan as the United Nations secretary-general’s special representative on business and human rights. Two years later, not long after Browne resigned and Tony Hayward took over as BP’s CEO, Bader left the company and joined Ruggie full time, helping create the U.N.’s Guiding Principles on Business and Human Rights.

In 2011, after the adoption of the Guiding Principles, “Team Ruggie” split up and Bader began writing The Evolution of a Corporate Idealist: When Girl Meets Oil (Bibliomotion, 2014). The book is a thoughtful memoir of her experiences and a nuanced guidebook with many lessons for aspiring corporate idealists. Bader, who is currently a part-time human rights advisor to BSR (Business for Social Responsibility) and a visiting scholar at Columbia University, recently talked with strategy+business about how dedicated people can guide their companies to protect human rights and the environment.

S+B: Is “corporate idealist” a job description?
BADER: No, the job titles of the people I interviewed for the book varied wildly. One person is the head of a supplier workplace accountability program; another is a general counsel. When I worked in China for BP, I was on the construction team.

I think of a corporate idealist as a person with a particular mind-set. Corporate idealists believe that business can have a positive impact on the world—but recognize that business can also present real risks to people and the environment. They are committed to making sure that their companies aren’t hurting people and, hopefully, are helping them.

S+B: You’ve worked both inside and outside corporations. Which is a more effective place for idealists to invest their energy?
BADER: Young people ask me this question a lot, and I tell them that each of us needs to figure out the niche in which we will thrive. I also tell them that their answers may change over time. My work at the U.N. was really interesting to me for a while, but eventually I realized that it was not the milieu in which I personally could have the biggest impact. My colleagues there were so good at understanding politics and semantics, but I wanted to know what we were going to tell businesspeople to do differently when they got to their offices on Monday morning.

S+B: If you work inside, how do you avoid co-optation?
BADER: That’s a risk that the corporate idealist knowingly assumes. One way that I’ve seen people mitigate the risk is to build communities with those people doing the same kind of work in other companies—they can provide a reality check. But I also think that it’s important to really become part of a place if you want to change it from within.

“It’s important to really become part of a place if you want to change it from within.”

S+B: How do you make a compelling business case for spending on things that defy quantification, like human rights, in a profit-driven environment?
BADER: I’ve found that the way to make the case is not to have a fixed idea about how you’re going to make the case going in. It’s important to find out what motivates people and identify what will resonate with them. I went to China to convince BP’s partners and contractors on a major ethylene joint venture to comply with international standards for the living conditions and working hours of a large migrant construction workforce, and to ensure that we were heeding the needs of the local community. I started talking about protecting and promoting human rights, and that fell flat. Then I argued that the standards that BP uses around the world had to be met, which just sounded arrogant and didn’t fly, either. Finally, I shut up and listened to the people around me. I heard their concerns about making the project a model for world-class practices. When I presented what we wanted in those terms, their response was, “Oh, OK. Why didn’t you say so?”

S+B: Isn’t making the business case for corporate responsibility and environmental sustainability in economic terms the quickest way to executive hearts and minds?
BADER: I know that the economics are important and that a lot can be gained by applying the rigor of financial tools and analysis to social and community issues and human rights. But if you go too far down that road, I think you can lose sight of what you’re talking about. Say I’m proposing that my company spend several million dollars to mitigate the risk that we could become complicit in a genocide. I don’t want somebody to come back to me and say, “OK, so if we invest half of that, can we tolerate the risk of being 50 percent complicit in genocide?”

S+B: You offer up John Ruggie as an exemplar for corporate idealists. What can they learn from him?
BADER: I was awed by John’s ability to create a feeling of ownership in outcomes, a necessity whether you’re working with insiders or outsiders. We would do these full-day consultations with lots of different stakeholder groups in the room—indigenous community representatives and folks from mining companies and human rights and environmental campaigners—and the debates were very polarized and contentious. People would be yelling and storming out of the room. John wouldn’t say much over the course of the day. Then, at the end, he would summarize what he had heard, and he would play back a little something from everybody in the room. People would walk out feeling like they’d been heard and willing to move ahead.

S+B: History suggests that there is an ebb and flow in the appetite for idealism within companies over time. As a corporate idealist, how do you deal with that?
BADER: Well, there is and there isn’t an ebb and flow. It depends on how well embedded social responsibility and sustainability are in the company’s approach to risk management and business continuity. The BP projects that I worked on in Indonesia and China were very much about getting facilities built properly and operating in ways that would be sustainable over the long term. Even though I left BP as the leadership changed, my sense is that those activities didn’t disappear—because it was clear that they were necessary to the business.

This is putting it mildly, but there can be a disconnect between the rhetoric at the top of the company and the operational realities. If the work of the corporate idealist is properly embedded, leadership transitions shouldn’t matter as much.

“If the work of the corporate idealist is properly embedded, leadership transitions shouldn’t matter.”

S+B: How do you go about embedding social and human rights and environmental considerations in a business?
BADER: I think they need to be baked into the processes of the company: how people get hired and paid and promoted, how resources get allocated, how new projects get approved. So, for instance, before a project is approved or product development begins, are we requiring a social impact assessment? That’s the real work of corporate idealists—getting things like that into processes.

S+B: How does a corporate idealist respond to disastrous events at his or her company, like the Deepwater Horizon spill?
BADER: I was gone from BP by then, but it shocked me and I know it shocked former colleagues of mine. You ask yourself, “If such a bad thing can happen in my company, or even in my industry, what does that mean for the work that I have done? How do I live with that?”

Some people can’t live with it and they just leave. But for a number of people I talked to, Deepwater actually strengthened their resolve. And who knows how many of these things they have prevented? You don’t hear about disasters that didn’t happen.

S+B: It seems clear that corporations don’t have all the answers when it comes to responsibility and sustainability. Are they asking the right questions?
BADER: I think that more companies are asking the right questions. Some of them are being forced to by legislation, like the California Transparency in Supply Chains Act. Others are being prompted by external forces and standards, like the Equator Principles and the U.N. Guiding Principles on Business and Human Rights. And there are industries where the right questions are becoming more and more routine—mining and manufacturing and tech, for example. But there will always be plenty of work for corporate idealists.