Mistreated: Why We Think We’re Getting Good Health Care — And Why We’re Usually Wrong 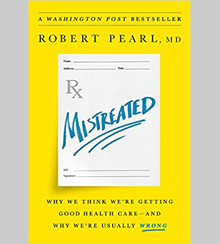 A decade after presidential candidate Barack Obama first declared comprehensive healthcare reform a central tenet of his platform — and seven decades after President Harry S. Truman proposed a national healthcare plan — the issue still stands at the center of political debate. In 2017, a Republican-dominated Congress and a new Republican president are grappling with their own comprehensive plan.

But even if the Affordable Care Act is repealed and replaced, Dr. Robert Pearl believes U.S. consumers and companies are unlikely to get any relief from rising costs. That’s what Pearl argues in his no-holds-barred book, Mistreated. This line of argument is dismaying and more than a little surprising, especially considering that Pearl isn’t an academic, or an activist, or a pundit with a shallow outsider’s knowledge of the industry. For nearly 20 years, until this month, he was the CEO of the Permanente Medical Group, which is a subsidiary of California-based managed-care giant Kaiser Permanente as well as the largest provider network in the nation in its own right, with more than 9,000 physicians and 34,000 staff members. In other words, he’s one of the people who manage a significant chunk of our increasingly unaffordable medical care.

“As we look toward the future, the economics of healthcare are shaping up to be a classic example of the unstoppable force meeting the immovable object,” Pearl writes. “The rising percentage of total dollars spent on healthcare (unstoppable force) and the limited ability of government, businesses, and individuals to pay for it (immovable object) are on a collision course. Something has to give.”

In Mistreated, Pearl argues that it doesn’t really matter who pays for healthcare, which has been the primary focus of the decade-long reform debate. “In the end,” he diplomatically asserts, “both presidents Obama and Trump understand that health-insurance coverage, although essential, is not the fundamental problem facing American medicine. The most important challenge for the nation is healthcare’s rising cost.”

Dr. Robert Pearl argues that who pays for healthcare — the primary focus of the decade-long reform debate — doesn’t really matter.

Pearl makes a compelling case for the assertion that healthcare costs are, as Warren Buffett likes to say, “the tapeworm of American economic competitiveness.” At healthcare’s current inflation rate, asserts Pearl, it will consume more than 30 percent of the gross income of U.S. citizens within 20 years. Pearl indicts every sector of the healthcare industry for contributing to this unsustainable cost curve, starting with his own. (Physician, criticize thyself!)

Because physicians are taught to rely on their judgment and experience, says Pearl, “they reject the idea of following consistent data-based approaches” to medicine. The result is avoidable mistakes that harm patients and require costly medical interventions. Pearl offers an example from close to home: His father, Jack, to whom Mistreated is dedicated, did not receive a required vaccination after a surgical procedure. That simple oversight resulted in a series of costly medical emergencies, ruined the quality of Jack’s retirement, and may well have cut his life short.

Insurers are pursuing consolidation to build their market power, but they do not see rising costs as their problem because they can pass the increased cost through to their customers. “Theoretically, insurers could use this added influence to obtain concessions from doctors and hospitals that lead to greater savings for policyholders,” says Pearl. “More likely, they will try to use the reduced competition to charge higher premiums for businesses and individuals.”

Pharmaceutical companies are taking full advantage of their political and marketing might to charge more for prescription drugs in the U.S. than anywhere else in the world. “What few realize,” writes Pearl, “is that the most successful pushers in history are drug companies and doctors.”

Medical device makers are also exacerbating the cost conundrum, according to Pearl. Instead of pursuing innovative products aimed at making care delivery more cost effective, they are focused on mass-market consumer products (such as activity-tracking wearables that don’t make their owners healthier) and expensive, high-tech solutions to nonexistent problems (such as 3D-printed replacement joints that aim to replace metal joints that work just fine).

Clearly the problem with U.S. healthcare is systemic in nature. So how can it be solved? Pearl offers a four-point plan that executives will recognize as a sound approach to fixing an inefficient, silo-plagued business that is sinking under the weight of its own ineptitude and complacency.

1. Healthcare will need to be integrated, both horizontally within specialties and vertically across primary, specialty, and diagnostic care.

2. Healthcare will need to be prepaid, moving away from pay-for-volume toward paying for value and superior outcomes.

3. Healthcare will need to be technologically enabled, with comprehensive electronic health record systems, patient access to medical information, and the ability to obtain care using mobile and video technologies.

4. Healthcare will need to be led by physicians, which will require greater leadership training and development.

Pearl concludes by expressing his hope that politicians “will view this recommendation as a blueprint for a skyscraper — difficult to build but grand once constructed.”

For the sake of both our physical and economic health, so do I.