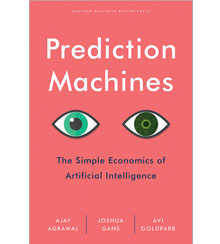 I don’t usually write mash notes, but I recently sent one to Waze via Twitter. I figured the navigation app had helped me avoid more than 100 hours of traffic jams over a couple of years, and I felt compelled to declare my undying gratitude.

After reading Prediction Machines, by three Rotman School of Management professors, it turns out I’m not so much enamored with Waze as I am with the technology that powers it: artificial intelligence (AI). It is AI that enables the app to predict the best routes for its users.

According to Ajay Agrawal, Joshua Gans, and Avi Goldfarb, who are also, respectively, founder, chief economist, and chief data scientist of the Creative Destruction Lab, prediction is the essential output of AI. “The current generation of AI provides the tools for prediction and little else,” they write. “Today, AI tools predict the intention of speech (Amazon’s Echo), predict command context (Apple’s Siri), predict what you want to buy (Amazon’s recommendations), predict which links will connect you to the information you want to find (Google search), predict when to apply the brakes to avoid danger (Tesla’s Autopilot), and predict the news you will want to read (Facebook’s newsfeed).”

This is the key insight of Prediction Machines, and it is an extraordinarily useful one for any executive who has been grappling with the implications and ramifications of AI. AI will automate prediction, and as a result, prediction will become cheap. “Therefore, as economics tells us,” explain the authors, “not only are we going to start using a lot more of it, but we are going to see it emerge in surprising new places.”

AI will automate prediction, and as a result, prediction will become cheap.

Imagine, for instance, that the AI that powers Amazon’s recommendation engine becomes so adept at predicting what customers will want to buy that the company could simply ship them goods rather than wait for an order. In essence, prediction would fundamentally alter Amazon’s business model from shopping-then-shipping to shipping-then-shopping. Does this sound far-fetched? In 2013, report the authors, Amazon obtained a U.S. patent for “anticipatory shopping.”

We’ve heard some pretty dire forecasts in the past few years regarding the impact of AI on jobs. But there’s a second key insight in Prediction Machines that could help soften them. As AI creates a glut of prediction, making it cheap and altering the essential nature of jobs in such fields as radiology, it will also drive up the demand for judgment, which currently only humans can provide.

“Judgment involves determining the relative payoff associated with each possible outcome of a decision, including those associated with ‘correct’ decisions as well as those associated with mistakes,” the authors write. “Judgment requires specifying the objective you’re actually pursuing and is a necessary step in decision making. As prediction machines make predictions increasingly better, faster, and cheaper, the value of human judgment will increase because we’ll need more of it.”

So, although it is likely that in the near future machines will be able to read MRIs and other images better than humans, this doesn’t mean that radiologists will disappear. The authors predict that radiologists will play at least five roles that machines can’t (yet): “Choosing the image, using real-time images in medical procedures, interpreting machine output, training machines on new technologies, and employing judgment that may lead to overriding the prediction machine’s recommendation.” In short, prediction machines will replace humans in some tasks, but they are unlikely to replace them in entire jobs.

As interesting as all this is, the question of what the typical business leader should do about AI remains. Happily, in the latter half of Prediction Machines, the authors offer some answers.

First, the authors address AI’s ramifications for operations. If you were around during the heyday of reengineering, this advice will sound very familiar to you. Just as computers enabled companies to undertake the clean-slate redesign of processes and jobs, so too will AI drive a new round of reengineering. “AI tools can change work flows in two ways,” say the authors. “First, they can render tasks obsolete and therefore remove them from work flows. Second, they can add new tasks.” To see this process in action, the authors point to Goldman Sachs’s CFO, R. Martin Chavez, who started his career in computing science and is outspoken about the future of investment banking. Many of the 146 distinct tasks in the initial public offering process were “begging to be automated,” Chavez said.

Second, the authors offer guidelines for executives who are considering the strategic ramifications of AI. They name three ingredients that cause AI to rise to the level of strategic consideration: a strategic dilemma or trade-off exists; the dilemma can be resolved by reducing uncertainty; and an AI tool can be used to reduce the uncertainty enough to change the balance in the dilemma.

To see this in action, the authors take us back to the hypothetical Amazon example. The strategic dilemma lies in the fact that a shipping-then-shopping business model may generate more returns than sales. The dilemma could be resolved by further reducing the uncertainties of customer demand. And a prediction machine could enable Amazon to eliminate enough of that uncertainty to make that new model viable. Voilà, AI becomes a strategic enabler.

Much has been written about AI, and much more will surely be written in the months and years ahead. But for its engaging mix of insight and practical advice, Prediction Machines gets my vote for one of the must-reads on the topic.