The Pan-Industrial Revolution: How New Manufacturing Titans Will Transform the World 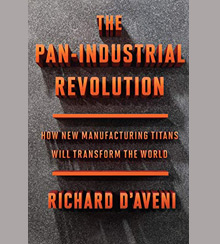 We’ve been treated to various versions of manufacturing in the past couple of decades. There’s manufacturing as an exercise in financial arbitrage — a link in a global supply chain that is reforged whenever and wherever people will do more work for less pay. There’s the maker movement, populated by hordes of entrepreneurs laboring away in shared shops. There’s Industry 4.0, where we inefficient humans need not apply. There’s the revitalized rust belt, polished to a mirror’s shine with tariffs. And now there’s Tuck School of Business professor Richard D’Aveni’s vision of manufacturing, detailed at length in The Pan-Industrial Revolution, a book that starts out strong but eventually bogs down in speculation.

D’Aveni’s version of manufacturing could be labeled “when dinosaurs rule the Earth once more.” He thinks that hulking tyrannosaurs like battered General Electric are going to rise up and roar in the years ahead. If he’s right, the Dow Jones Industrial Average might actually become industrial again.

D’Aveni weaves this new vision on an intricate loom. Its weft is composed of additive manufacturing (AM), which includes all the evolving forms of 3D printing in combination with other production technologies, such as lasers and robotics; its warp is digitized, AI-powered management systems and platforms.

AM is a game-changing family of technologies, and D’Aveni illustrates them with a host of gee-whiz examples. Lockheed Martin can 3D-print the entire body and interior of its 12-ton, 50-foot-long F-35 fighter jets in about three months, compared with the two to three years it takes to make them using traditional technologies. (It’s now working to cut production time to three weeks.) Electronics parts supplier Lite-On is using 3D printers to make 15 million smartphone antennas annually, demonstrating the technology’s potential for cost-effective mass production. The medical device company Stryker, which is already 3D-printing joint implants, is developing machines that can be installed in hospitals to produce customized implants while surgeons and patients wait. Local Motors has demonstrated its ability to 3D-print a car — reducing the number of parts needed from 30,000 to 50.

As many observers have pointed out, AM allows companies to make products any place they can set up a printer. But D’Aveni looks at new factories being constructed by companies such as Emerson Electric and ThyssenKrupp, and consortiums of companies such as EOS, Airbus, and Daimler AG, and argues that the true import of AM is that it radically expands economies of scope. “The innovations being implemented at factories like these,” he writes, “are the first steps toward a future in which companies can efficiently manufacture almost anything, almost anywhere — and shift production from one product to another, and even from one industry sector to another, whenever market changes require it.”

Better yet, in defiance of conventional wisdom, the economies of scope offered by AM will not require sacrificing economies of scale. Instead, says D’Aveni, the benefits of scale will be preserved thanks to improvements in the speed and accuracy of AM technologies; the development of hybrid fabrication systems, in which robotic systems tend 3D-printer farms; and lower costs in adjacent functions such as logistics and distribution, purchasing, and marketing and sales.

With the additive-manufacturing weft in place, D’Aveni strings the warp with the digital information tools, instantaneous communication, and network effects conferred by digital business ecosystems and platform strategies. These technologies are already wielded with profitable effect by companies such as Apple, Uber, Facebook, and Amazon. But D’Aveni says that when they’re combined with AM by manufacturers such as Jabil, which is already the world’s third-largest contract manufacturer (after Foxconn and Flex Ltd), they will help create a new class of “pan-industrial” companies.

D’Aveni defines pan-industrials by three key features. They operate in and make products that span multiple industries. They rely on additive manufacturing for much of their production, taking advantage of the economies of scope and scale that AM makes possible. And they use an industrial platform to connect and optimize the multi-industrial factories that they operate.

This is an enticing story. But it is also where The Pan-Industrial Revolution takes a big leap. No company has yet constructed the kind of industrial platform that D’Aveni describes, yet the second half of his book is based on the assumption that it will come to pass. The book further assumes that when this crucial platform does materialize, pan-industrial federations and collectives will spontaneously emerge. D’Aveni doesn’t think it is likely that these assemblies of companies will give rise to modern-day zaibatsu, but he does see them capturing a sustainable competitive advantage — an outcome that he himself argued was no longer possible 25 years ago in his book Hypercompetition (Free Press, 1994).

Will industrial giants rule global markets once more? If they don’t, D’Aveni suggests it won’t be because his predictions are flawed. “If it turns out that I’ve read the tea leaves wrong,” he writes in the epilogue of The Pan-Industrial Revolution, “the reasons will likely lie with decisions being made by business leaders today.”