This year marks the 50th anniversary of the Whole Earth Catalog, the magazine and mega-best-selling compendium of books, tools, and ideas. It was a newsprint hippie quarterly in 1968, a National Book Award winner in 1972, a revived edition and magazine in the 1980s, and an ecologically oriented review in the 1990s, until it ceased publication in 2002. Along the way, it helped thousands of people learn how to do new things. It also gave them the courage to put their knowledge to use. Among the many writers and thinkers it featured (often for the first time to a lay audience) were futurists Buckminster Fuller and Herman Kahn,  authors Ken Kesey and Sallie Tisdale, Admiral Hyman G. Rickover (on evading bureaucracy for the sake of doing a job), environmental activists Amory Lovins and Wendell Berry, philosopher Ivan Illich, poet Anne Herbert (an editor there who coined the famous phrase “Practice random kindness and senseless acts of beauty”), and astronaut Russell “Rusty” Schweickart (on how people go to the bathroom in zero gravity). Only a few contributors were businesspeople, but entrepreneurs recognized the importance of Whole Earth from its beginning. Steve Jobs famously closed his 2005 Stanford University commencement speech by praising Whole Earth’s influence. “It was Google in paperback form,” he said, “35 years before Google came along.” 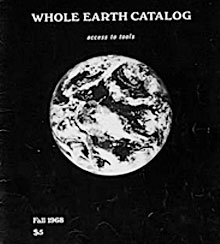 If you built a business career through conventional means, you may not have come across Whole Earth in its various incarnations (including the magazine CoEvolution Quarterly), but nonetheless, it has shaped what you do in profound ways. It has certainly shaped what I do. Founder Stewart Brand hired me in 1980 to help manage the research for the Next Whole Earth Catalog (the 608-page revival edition), and I ended up staying through 1988. It was there that I learned my professional craft.

Stewart was, of course, a well-known figure by then, particularly in the Bay Area — he had driven the bus in Tom Wolfe’s The Electric Kool-Aid Acid Test and was an influential writer, commentator, and creator of flamboyant experimental ventures. (Six years later, as a cofounder of the Global Business Network, he would become a business consultant.) Working with him, and others at Whole Earth, I learned to trust the independent eye of a leader: to respect cultivated, thoughtful human judgment, without having to rely on established academic or institutional credentials.

I also learned how to distill knowledge to its essence. Among his other celebrated qualities, Stewart is one of the world’s great book reviewers. By enlisting us in the never-ending task of reviewing books (how-to books in particular), he forced us to develop the skill of summing up a book or idea in a paragraph or two, in a concise and helpful way, without being glib or facile. It’s hard to remember how difficult it was to find good, practical advice back then. Most of the guidance on a new field was written by professionals for professionals — in other words, written to obscure and exclude. But at Whole Earth, we were finding books and tools that could help people try things out on their own — starting a new venture or learning a new craft or building a home themselves, with no experience but a book to guide them. If people want to consider that kind of thing, they need to be able to browse rapidly through the possible ways they might change their life.

More broadly, Whole Earth created an exhilarating but dangerous legacy that exemplifies, I think, the change of perspective wrought by the Industrial Revolution. While researching a forthcoming book about the mental activity — the mind and brain patterns — associated with long-range, farsighted leadership, I found myself revisiting the words that Stewart wrote to introduce the Whole Earth Catalog: “We are as gods and might as well get good at it.”

The phrase is, of course, a direct reference to the Biblical story of the Garden of Eden. The serpent, tempting Eve, reassures her that she won’t die if she consumes an apple from the Tree of Knowledge of Good and Evil. “Your eyes shall be opened,” it says, “and you shall be as gods.” That’s the beginning of the story of original sin and of the tendency for our own idealism and activity, of any sort, to go horribly and terribly wrong.

What does this have to do with business? Religious traditions associate the idea of being as gods with hubris, karma, the sin of pride: narcissism that can only lead to tragedy. And life is full of human-made suffering: incredible cruelty, fierce neglect, terrible mistakes, and rampant exploitation, all the way up to genocide. Icarus figures, flying too close to the sun, are everywhere. Many of them are business leaders, who overstep, fudge numbers, exploit people, or act intemperately — and then face the consequences. Leaders of governments, not-for-profits, and faith-based organizations can be similarly culpable. A scan of the newspapers is often enough to make you believe in original sin — or at least in the idea that people should not be in charge of determining what is meaningful in the universe.

But here was a book — a popular, practical, friendly countercultural catalog, with oversized pages and a picture of the Earth on the cover — that suggested we should embrace and accept our mastery. As Stewart would later argue in his masterpiece, Whole Earth Discipline: Why Dense Cities, Nuclear Power, Transgenic Crops, Restored Wildlands, and Geoengineering Are Necessary (Penguin, 2009), human beings, at least in aggregate, have been as powerful as gods for millennia. The earth’s temperature, for example, triggered by greenhouse gases in the atmosphere, has regularly risen and fallen with the growth and reduction of the human population; the development of agriculture, with its destruction of forests, affected the climate just as powerfully as the internal combustion engine.

“Never mind terraforming Mars,” Brand wrote in Whole Earth Discipline. “We already live on a terraformed Earth.” Now, at Whole Earth’s 50th anniversary, humans are powerful enough to change the composition of the atmosphere and oceans, to exterminate species, and to re-create them through biotechnology; and omniscient enough to track moment-by-moment behavior and share that knowledge around the world. Enough of us are terrible enough that there is good reason to fear that power and knowledge, just as you’d fear a malevolent God.

And the Whole Earth ethos encouraged us to not worry and be, if not happy, then at least confident. We can’t escape the consequences of human activity, so we might as well get good at what we do. And, moreover, we can trust that people will. Or at least, we can trust that enough people, enough of the time, left to carve their own paths, will move to virtuous ends, if they find the right tools and are willing to learn. This trust in humanity — the faith that people can act responsibly and with integrity, even while indulging themselves and seeking pleasure, even outside the strictures of political, religious, or family authority — was a profoundly radical idea.

That rebellious responsibility is a recognizable quality in the really great business leaders, I think. And it relates directly to economist Joseph Schumpeter’s concept of creative destruction. Prosperity, according to this view, is what happens when you trust enough entrepreneurs, enough of the time, to step out of established modes of doing things. Some will create unicorns; many will fail; some will do great damage; but even more will move civilization forward. The most successful may eventually become as entrenched and oversized as the establishment they originally tried to supplant.

Back in 1968, it was hard to imagine that happening. In the first Whole Earth Catalog introduction, Stewart explained why he thought most large institutions had grown moribund and destructive. “So far, remotely done power and glory,” he wrote, “as via government, big business, formal education, church — has succeeded to a point where gross defects obscure actual gains.” The Catalog, he added, was to provide tools that would abet a "realm of intimate personal power.”

But by the time Whole Earth Discipline appeared, Stewart was embracing large organizations; indeed, he’d cofounded Global Business Network, a future-oriented consulting firm specializing in scenario work in the 1980s and 1990s. (He left when it was acquired by Monitor.) “New situation, new motto,” he wrote in 2009. “We are as gods and have to get good at it.” This was just after the financial crisis struck, and the track record for large organizations — and small ones — was not looking good. But the Whole Earth Catalog has always been a publication of faith in people. They can solve the problems that humanity has created, and create new aspirations (and new problems) along the way.

The glory and danger of business is the way people sally forth to try things, on an increasingly grand scale. The current issues facing humanity — including income inequality, climate change, demographic shifts, cyber-threats, technological mishap, and global migration — require every ounce of good will and ingenuity we can muster. But it’s too late to retreat from addressing these problems. They have to be tackled with openness, transparency, a basic faith in people, and a certain amount of willingness to act and take joy in that action, even while we’re being thoughtful about it.

That’s the Whole Earth credo. We may not be literally as gods, but we’re already too powerful to shrink back from exercising that power. We need to exercise it more reflectively, with at least an ounce of whimsy to leaven the seriousness of our endeavors. The closing coda of the Whole Earth Catalog, in every edition, was also quoted by Steve Jobs in his commencement address. Every business decision maker, no matter how respectable or imposing he or she may seem, is following its two principles on a daily basis. “Stay hungry. Stay foolish.”