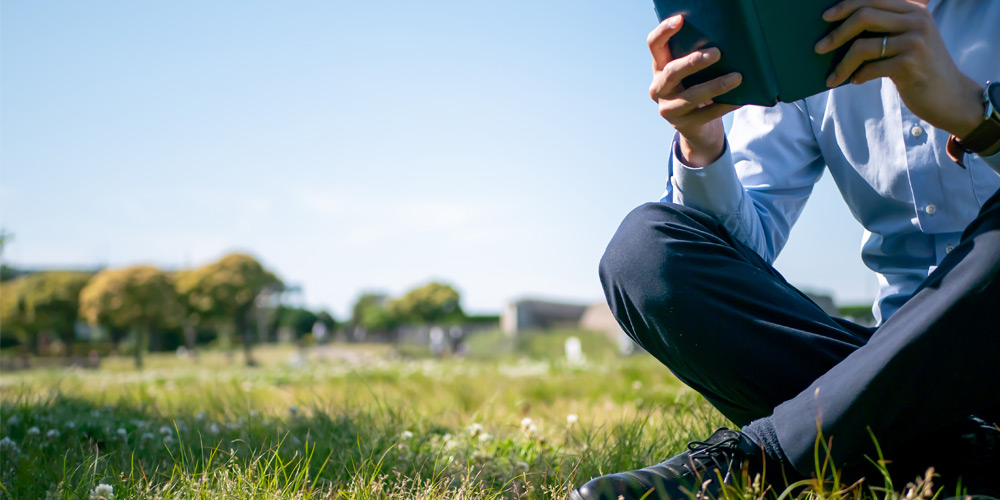 When countries began shutting down in response to the growing pandemic this spring, many employees found themselves working from home. That can be freeing and productive for some people, but lots of others scrambled to work around housemates, pets, partners, and children; splintered teams were reunited in endless Zoom meetings, and corporate life suddenly took on a very different tone.

Which is precisely why Krissee Chasseur’s team at Zappos, the online shoe retailer, started a book club. “We were putting together ideas to keep our team digitally engaged, and a weekly virtual book club seemed like an easy fit to blend our core values of ‘pursuing growth and learning’ and ‘building a positive team and family spirit,’” she told me via email.

Their first book was Atomic Habits, by James Clear, a guide to losing bad habits and gaining good ones, followed by Man’s Search for Meaning, a 1946 book by Holocaust survivor and psychotherapist Viktor Frankl. When I talked with Chasseur, they were reading Stealing Fire, by Steven Kotler and Jamie Wheal, about the use of “altered states” to optimize productivity and achieve “flow states.” (Only some of the book is about drugs; all of it is about achieving ecstasis, a state of transcendence that leads to focus and inspiration.)

For all the hand-wringing over the death of reading, one in 10 Americans say they’re in a book club, according to a 2017 Pew Research Center survey. And that was before the pandemic suddenly handed some of us more time to read. A recent survey of Britons by Nielsen Books found that 41 percent said they were reading more than they had before Prime Minister Boris Johnson announced lockdown measures on March 23. In the U.S., books sales were robust through April, according to Wired magazine, which also reported, such was the power of reading during the pandemic, that fledgling online book retailer Bookshop, based in Chambersburg, Pa., was catapulted from a four-employee operation to one of the top 10 bookstores in the United States. Though specific categories of books are affected differently — it’s not a great time to release an international travel guidebook, but it’s the perfect moment for escapist thrillers — the overall picture for books is more, not less, rosy.

For companies, however, book clubs offer more than just momentary escapism. Right now, I’d argue they offer something vital: a personal link between team members who are soldiering on in partial or total physical isolation, a mechanism for inculcating company values and culture, and a way to feel “normal” in a really weird time.

Book clubs offer more than just momentary escapism. I’d argue they offer something vital: a personal link between team members who are soldiering on in partial or total physical isolation.

“The current situation absolutely plays a role in what we read and what we discuss, which has helped us process [the crisis] mentally and get creative with ways to pivot our business and mind-set,” said Chasseur. “Starting the book club has been immensely impactful on our team during this time. I think as we transitioned to working from home, it helped with keeping a sense of normalcy, and also helps us keep our core values and connections alive, even if we can’t physically be together.”

Company book clubs have long been a thing — in the 1940s and ‘50s, Lemuel Boulware, General Electric’s head of labor relations, guided employees to host them in their homes. On GE’s booklist was, among others, Lewis Henry Haney’s How You Really Earn Your Living: Every Man’s Guide to the American Economy. It was a conservative everyman, to be sure, and this had the effect of reinforcing GE’s corporate values to employees, a way to literally get them on the same page. (See what I did there?) Whether or not that was entirely a good thing is certainly debateable, but the point is, company book clubs do communicate corporate values — through the reading matter itself, or the act of engaging with the written word, or by inviting employees to interact outside of the work environment.

“If you have this kind of book club, [employees] become a little more than a name on the end of an email, but it’s still professional…. It nicely bridges that gap between a professional offering and a more casual leisure offering,” said Laurence Kilpatrick, general manager of the Pigeonhole, a digital book club service that partners with publishers to serialize books for readers. Though many of its clients are private book clubs or individuals, a significant number are companies looking to put together a club for their employees.

Since the pandemic started, Kilpatrick said, the Pigeonhole has seen an uptick in the number of inquiries from businesses. The service includes curating books, dividing them into serial installments called staves that are available to read on an app, and providing a digital platform to discuss the books. Readers can make comments on various parts of the shared text and access relevant videos or comments from the author.

The platform also offers employees a way to communicate other than by email or office messaging mediums. “If you choose the right content, and it’s distributed to your colleagues in the right way, it can keep people together — if you make it part of the working day so that people don’t feel like they’re stopping working to do it,” said Kilpatrick. Less comforting is the fact that the platform allows facilitators to see who’s reading the books and how far they’ve gotten; how companies present that to their employees, Kilpatrick said, is up to them. But, he added, “I don’t think people are getting slapped wrists for not participating.”

Corporate book clubs can also function as a way for a company to signal to employees and the rest of the world what kind of an organization it wants to be.

The Zappos book club certainly fits with the company’s culture — Chasseur’s team’s club isn’t the business’s only one, and CEO Tony Hsieh’s book-reading habits and in-house library at Zappos’ HQ have been the subject of other articles in the past. (Chasseur’s job title — brand aura research and development lead — also fits with the company’s unique culture.) Chasseur is her book club’s lead — she chooses the book and creates a readers’ guide, featuring quotes and questions, to accompany it. Club members are asked to complete a section of the chosen book each week, usually between 60 and 100 pages; they then meet for an hour on the Amazon Chime messaging service to discuss what they’ve read. “I’ve been consistently and pleasantly surprised by how genuine and raw and real our discussions have been. We always joke that it’s part book club, part group therapy,” Chasseur said.

A weekly hour-long book club might be a bit much, especially for employees suddenly trying to juggle everything — work, life, family, kids, stress — from home. Or it might be a welcome respite from that juggling. But a book club that’s run well, that’s pressure-free and not perceived as a chore, is the kind of offering that many companies could benefit from. Especially now.