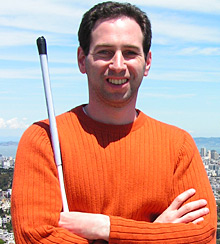 If Komatsu decides to cut prices in a bid to grow its market share, will Caterpillar match the cuts? If Amazon makes a full-out run at the grocery business, will Kroger compete online? If Google refuses to censor Internet searches, will China’s government deny its citizens access to the search engine? Predicting the actions and reactions of competitors—and other stakeholders—is often an essential element in executive decision making, and getting those predictions wrong can have costly consequences.

Historian Zachary Shore believes leaders in all spheres can reduce decision risks and improve the accuracy of their predictions by developing a skill that he calls strategic empathy. In his fourth and latest book, A Sense of the Enemy: The High Stakes History of Reading Your Rival’s Mind (Oxford University Press, 2014), the professor at the Naval Postgraduate School, a research university operated by the U.S. Navy in Monterey, Calif., offers a new perspective on predicting the behavior of others. Shore discussed his findings and their applications with strategy+business.

The idea behind strategic empathy has been around for a long time in the military and politics. Two thousand years ago, Sun Tzu wrote about the importance of thinking like the enemy. What we don’t have is a reliable way of doing it.

S+B: How did you get interested in this idea?
SHORE: My larger interest is judgment, especially in foreign affairs. I want to understand why people make the decisions they make, and how that affects historical outcomes. My first three books were all inquiries into bad judgment. They led me to A Sense of the Enemy, which explores how we read other people by focusing on leaders at key moments in international conflicts in the 20th century.

I’m also naturally curious about how we develop a sense for what someone else is thinking and feeling. I was legally blind by age 16, and there was a gradual degeneration after that. I don’t think that my blindness sparked my broader interest in judgment and the causes of war, but being unable to read body language or facial expressions has certainly led me to think about how we read other people.

S+B: What did you learn about reading other people that was new in the course of writing this book?
SHORE: Two things. First, reading others requires going deeper than their intentions and capabilities, things that are often analyzed in military affairs. We need to get down to the level of drivers and constraints.

Intentions are manifestations of a person’s underlying drivers. When you understand why people have certain intentions—what’s driving them—you can better anticipate what their future intentions will be. The same is true of capabilities. We often ask what a leader is able to do. But leaders can have all sorts of capabilities at their disposal, and still be constrained by a whole host of factors beyond their control, from things as concrete as financial constraints to things as ephemeral as the Zeitgeist, which, as Muammar Gaddafi, Hosni Mubarak, and other Middle Eastern leaders recently discovered, can be a game changer.

The second and main insight involves a method for understanding another person’s drivers and constraints. And that is by focusing on the behavior of your subject at pattern breaks.

S+B: Okay, we’ll bite. What are pattern breaks?
SHORE: The conventional approach to reading others is based on pattern recognition. That’s what Amazon and Google are focused on, using big data to predict what products we will buy and what our interests are. Patterns can be useful, but they can also be highly misleading.  They can tell you how someone acted in the past, but that may not matter if the context has changed significantly. My book’s main argument is that we can better understand our opponents’ drivers and constraints from their behavior at pattern breaks—at times when deviations from the routine occur.

Patterns can be useful, but they can also be highly misleading.

There’s a bit of nuance to this. To really gain insight into your subject, you first need to find a pattern-break event (or moment) that is meaningful. A meaningful pattern break is one in which a competitor’s response will impose serious costs upon him or her, usually with long-term implications.

For example, when Mikhail Gorbachev came to power, many people wondered if his talk of glasnost was for real. Then the Chernobyl nuclear disaster occurred. Unlike previous Soviet leaders, he risked push-back from right-wing hardliners by not only admitting to the world that the disaster had occurred, but also inviting American medical experts to help treat the victims. For anyone who wondered whether glasnost was for real, Gorbachev’s behavior in this pattern-break event should have gotten their attention.

There’s a second nuance, too. Pattern-break behaviors—that is, the response of a subject to a pattern-break event—does not have to entail change for us to learn something important. A person’s behavior at a pattern-break moment could continue on exactly as it had been before the event. Whether people change their behavior or not, the way that they respond at those times is usually more revealing about their underlying drivers and constraints than their pattern of past behavior.

S+B: So the behavior of a CEO at a pattern-break moment would give us some insight into how that leader might respond in another situation?
SHORE: Yes. In the 1990s, when the U.S. Department of Justice went after Microsoft for violations of the Sherman Antitrust Act, Bill Gates fought long and hard and at a high cost. If you were competing against him at that time, his response to that pattern-break event would have told you something about his underlying drivers and how he might respond if you challenged Microsoft in the marketplace.

S+B: What pitfalls should leaders be aware of as they seek to better understand their competitors’ minds?
SHORE: I’ve mentioned the continuity heuristic—that is, trying to understand the future by focusing solely on your subject’s past patterns of behavior.

The other common pitfall is trying to predict another person’s behavior by projecting ourselves into that person’s head—by asking, “What would I do if I were in his or her shoes?” That’s a bad way to approach prediction, because that person may be operating with very different drivers than you, and under very different constraints. Stalin fell into this trap when he failed to foresee the Nazi invasion of the Soviet Union in 1941. He seems to have relied on a cognitive approach that scientists call “simulation theory.” He assumed that Hitler would act the same way he himself would act. In other words, he believed that he and Hitler had the same underlying driver—power. Stalin was sure that Hitler would never jeopardize his power by invading Russia while Germany was still at war with England. The only problem was that power wasn’t Hitler’s underlying driver; it was his racist ideology.

S+B: It sounds like strategic empathy is focused on predicting how an individual might act. Can it be applied to better understanding groups of people?
SHORE: It cannot work when analyzing whole societies, but it can be effective for understanding smaller groups, especially leadership groups. Gandhi, for instance, was able to predict how the British government would react to the strategy of nonviolence.

He looked at how the British behaved after the massacre at Amritsar in 1919, a pattern-break moment. He saw that Britain’s Liberal and Labour Parties responded very differently than the Conservatives, who were committed to preserving the British Empire. The former parties were deeply remorseful, and Gandhi concluded that they would never allow such a thing to happen again. He was right. By the time of the famous Salt March in 1930, he was able to lead thousands of unarmed Indians in direct defiance of colonial police, yet not a shot was fired.

S+B: Does Gandhi’s example translate into the business realm?
SHORE: Not as dramatically, but we could talk about risk analysis. If you were thinking of opening plants in a foreign country, you’d want to have a sense of what direction its government is heading. Is there a risk it will nationalize industry? Will it liberalize its financial markets?

Gandhi’s example also points up the value of strategic empathy for corporate underdogs. Industry-leading companies can leverage their money, prestige, and influence to get what they want. But underdogs need to rely on their wits a bit more.

S+B: Can strategic empathy be cultivated?
SHORE: Some people are naturally better at it than others, but it is a skill that can be improved. I can recommend a few guidelines for that. First, be aware of the trap in the continuity heuristic and simulation theory. Second, focus on behavior at pattern-break events. Third, pay close attention when people act in ways that impose long-term costs upon themselves. Fourth, practice.

Topics: experts, internet, leaders, operations, politics, young profs
Get s+b's award-winning newsletter delivered to your inbox. Sign up No, thanks