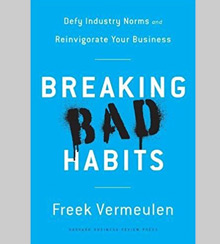 Back in the day, reading the newspaper on my morning commute to Manhattan was an origami-like exercise in folding and refolding. I never wondered why newspapers were printed on broadsheets that were too big for the bus. But Freek Vermeulen did. The clumsily sized standard for newspapers of record peeved him.

It took the associate professor of strategy and entrepreneurship at the London Business School years to ascertain that the widely used broadsheet dated back to 1712. That’s when the English government began taxing newspaper owners by the number of pages they printed. Bigger pages meant fewer pages and thus less tax. The tax was eventually abolished, but the broadsheet remained the standard — even though the cost of the paper was high and its unwieldy handling irritated readers such as Vermeulen.

In 2003, an English newspaper bucked the long-established standard. The struggling Independent ran an experiment. It offered its paper in broadsheet and in a format exactly half that size in one market. The smaller paper outsold the larger by three to one. The Independent’s leaders quickly adopted the half-size version nationwide, and the paper’s print circulation rose 20 percent annually for several years.

The lesson, says Vermeulen, and the worthy theme of his new book, Breaking Bad Habits: “Killing bad practices can open up new avenues of growth and innovation and reinvigorate your business.”

“Killing bad practices can open up new avenues of growth and innovation and reinvigorate your business.”

Vermeulen, who has written for strategy+business, devotes the first third of the book to admiring the problem of bad practices. He points to the many failed total quality management implementations in the 1980s and 1990s as an example of how leaders try to replicate the successful practices of other companies, but muck it up through oversimplification. He blames the organizational tendency to assume there is a good reason for established practices for perpetuating the bad ones, à la broadsheet newspapers. He calls out the perception biases and casual ambiguities that can blind leaders to the negative, long-term consequences of the practices they adopt. As an example, Vermeulen cites the continuing adherence of many companies to ISO 9000 quality assurance standards, even in the face of studies that show they have a stifling effect on breakthrough innovation and agility.

In the second third of the book, Vermeulen explores the silver lining in this cloud of bad corporate practices. Here, he offers two chapter-length cases of successful businesses: Netherlands-based citizenM, a hotel chain founded in 2008 that cut construction and staffing costs by 40 percent each and boasts 95-plus percent occupancy rates, and U.K.-based consultancy Eden McCallum, which has built a client list of more than 300 corporations since 2000. But, as the author describes it, citizenM carved out a market space for itself by creating a hotel that caters specifically to young, frequent business travelers, and Eden McCallum cut its costs by hiring freelance consultants instead of full-time employees. Precisely what “bad” practices the companies eliminated are unclear.

Although the two cases may be a bit of a stretch, they do lead to the best part of Breaking Bad Habits: Vermeulen’s “Ten Commandments” for identifying and eliminating bad practices. These include replacing your company’s benchmarking efforts with “reverse benchmarking” — that is, looking at established practices in your industry and asking what might happen if you stopped practicing them — which is what Herb Kelleher and Southwest Airlines famously did when the airline eliminated the de rigueur airline meals. It turned out few travelers actually wanted them. Another of Vermeulen’s commandments is to pay close attention to the new companies and the distressed companies in your industry. They’re likely to be questioning established practices and thus may lead you to an opportunity for innovation. It’s not a coincidence that The Times (of London) downsized its paper after the Independent’s experiment proved out.

In the final third of Breaking Bad Habits, Vermeulen roughly stitches together his advice for stimulating organizational innovation, though the connection of this advice to bad practices is tenuous at best. He reprises the 2010 Harvard Business Review article in which he and his coauthors made a strong case for creating organizational change whether there’s an explicit need for it or not, because corporate success is a quest without end. He argues in favor of doing hard things, because challenging tasks yield valuable organizational learning. And he advises leaders to cast their innovation nets as widely as they can to collect ideas, but to be highly selective in choosing which ideas to pursue and fund.

In all, Breaking Bad Habits isn’t the most coherently argued book. But it does contain nuggets of insight and advice that are well worth mining.