The Sharing Economy: The End of Employment and the Rise of Crowd-Based Capitalism

Arun Sundararajan, a professor at New York University’s Stern School of Business, prefers crowd-based capitalism to describe the phenomenon encapsulated by rapidly growing commercial platforms such as Uber. But, like the rest of us, he also uses the term “sharing economy,” because doing so “maximizes the number of people who seem to get what I’m talking about," he writes.

The confusion over terms — other people speak of the “gig economy” or the “on-demand economy” — is understandable. After all, sharing economy arrangements have cropped up in a wide variety of industries, including transportation and housing. The structure of such enterprises varies widely as well. Some sharing economy ventures truly involve sharing — facilitating an exchange of services with no money changing hands, as is the case with the travel platform Couchsurfing. Others look like fairly traditional marketplaces in which buyers and sellers meet and cut deals over networks such as Etsy. Providers on some platforms can become microentrepreneurs, free to conduct commerce on their own terms; others can look an awful lot like employees. 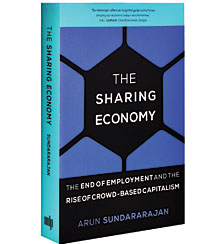 This smartphone-enabled, venture capital–fueled phenomenon cries out for a biography, a taxonomy, and an impact analysis. In The Sharing Economy, Sundararajan supplies all of those things. While much of the book will be familiar to someone who follows events in this world — he spends a good bit of time explaining how these platforms actually work — it’s a useful and fundamentally optimistic attempt to explain where the sharing economy came from, and where it’s going.

Sundararajan believes that these new developments are, on the whole, a force for good in the world. Perhaps for that reason, he overlooks some of the less-rosy economic forces behind their rise, and brushes off those who argue that platforms such as TaskRabbit are basically traditional businesses attempting to skirt the rules by which conventional industries are bound. At the same time, Sundararajan is not so naive as to think that such new businesses ought not to be regulated — and he offers a few thoughts on what the new regime should look like.

To a degree, the sharing economy is a back-to-the-future move, Sundararajan explains. In the pre-industrial economy, most people ran their own businesses or had gigs, either as smallholders eking out an existence from the land or as urban grunts doing odd jobs. The 20th century brought a disruptive force: large corporations that employed tens and hundreds of thousands of people, and distributed safety net benefits.

But as we evolve from managerial capitalism to crowd-based capitalism, today’s small-time entrepreneurs — and the massive companies that facilitate them — begin to have huge advantages over their predecessors. Widely available GPS technology, connected to smartphones, allows for the seamless delivery of goods, services, and payments. Universally visible online profiles allow people with no formal credentials to build credibility through earning endorsements for services rendered.

And yet these changes raise big questions about how government and society can ensure that consumers are protected and workers are treated well when the closest thing they have to an employer — the platform upon which they find customers — denies that it’s an employer at all.

It’s clear where Sundararajan’s sympathies lie. The text is peppered with tales of sharing economy conferences attended, panels conducted, and test rides taken, and he largely shares the perspective of those who have pioneered and invested in this emerging form of commerce. He argues, convincingly, that on-demand platforms could have many salutary effects. For example, in his influential book Capital in the 21st Century (Belknap Press, 2014), economist Thomas Piketty lamented the fact that the return on investments in physical assets is rising faster than the economy overall. “With a little additional infrastructure,” Sundararajan writes, “Piketty's ‘renters’ can begin to experience the other side of the coin by making money through investing or owning rather than laboring.”

That’s possible. But Sundararajan — a user and beneficiary of the sharing economy — overlooks some of the less appealing factors behind its rise. For example, he neglects to mention the pervasive wage stagnation that has pushed people (many of them with full-time jobs) to augment their income with microtasks. He also presumes that employees automatically have less flexibility than contractors, which isn’t always the case. Full-time employees (such as professors!) can often have exceedingly flexible work arrangements.

Sundararajan buys into the notion that because the sharing economy creates fundamentally different forms of work, the old rules and regulations governing work are obsolete. “There is little value in trying to retrofit old regulatory regimes into the new models,” he writes. What might make sense for ensuring compliance by a large institutional hotel or restaurant chain, he thinks, could push the person earning some extra money on VRBO out of business.

Sundararajan writes persuasively that networked platform companies will actually have an easier time self-regulating in the public interest than their traditional counterparts because a provider’s future business prospects depend on the reputation he or she has built with customers. But his answer to the question of how to regulate employment, however, is less satisfying. Facing the prospect of a social safety net shredded by the growth of mini-jobs that don’t require employers to contribute to workers’ long-term financial security, Sundararajan posits that many platforms want to offer employment-like benefits — as long as they don’t come with employment-like obligations.

To that end, Sundararajan cosigned a letter with platform companies that are subject to traditional regulatory frameworks, calling for a “safe harbor” from employment law for platform companies while they figure out their business models. “How would one relax those constraints in a manner that allows us to examine what the market will provide naturally, and what we need the government to step in and make happen?” he writes.

He suggests that platforms could be asked to contribute to portable accounts for retirement, healthcare, and unemployment on a prorated basis to replace the formal commitments that traditional companies have made with their employees. Over the longer term, that concept could evolve into a system of providing basic incomes for all members of society as a way of compensating for the declining quality and quantity of employment throughout the economy. Such measures sound good in theory. In the meantime, and in the short term, letting sharing economy companies off the hook could also let their workers fall through the cracks.

The sharing economy industry has made great strides in constructing systems and platforms that are appealing to consumers. Its next great challenge will be to allow workers to share in the benefits more fully.