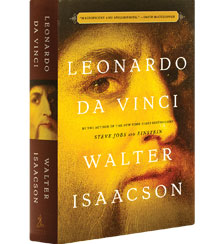 Over the last decade and a half, Walter Isaacson has become one of our most interesting and enlightening students of innovation and invention. In biographies of Benjamin Franklin, Albert Einstein, and Steve Jobs (all, in different ways, radical innovators) and in The Innovators, his masterful history of the digital revolution, Isaacson has turned the lives of his subjects into prisms through which we can understand the nature of creativity, the conditions necessary for innovators to flourish, and the way personality and circumstance shape what they produce.

So it’s only fitting that Isaacson turned his attention to Leonardo da Vinci, the 15th-century Florentine polymath who made groundbreaking discoveries in optics, engineering, anatomy, geology, fluid dynamics, weaponry, and, of course, painting. Leonardo’s restless, endlessly curious mind made him the very model of the Renaissance man, and, in Isaacson’s words, turned him into “history’s consummate innovator.”

It’s hard, perhaps impossible, to overstate the extraordinary reach and depth of Leonardo’s genius. Isaacson makes the case in Leonardo da Vinci that his genius was “a human one,” in contrast to that of thinkers such as Newton and Einstein, whose minds seem to have had “so much processing power that we mere mortals cannot fathom it.” In other words, we can, to some degree, identify with and understand how Leonardo did what he did (even as most of us cannot understand how Einstein came up with the theory of relativity). Still, there is nonetheless something superhuman in Leonardo’s omnivorous thirst for knowledge, and in his ability to make conceptual breakthroughs that in many cases were not replicated for centuries.

The book begins with Leonardo’s childhood (he was the illegitimate son of a notary, but in a time and place when illegitimacy was no real obstacle to achievement) and education. But the narrative is built around Leonardo’s voluminous work — paintings and engineering work, yes, but also scientific investigations. So Isaacson looks, of course, at Vitruvian Man and The Last Supper, and concludes his book with a careful (and moving) explanation of why the Mona Lisa became the world’s best-known painting. But he also looks at “Codex on the Flight of Birds.”

The heart of the book is Leonardo as he emerges through his extraordinary notebooks, page after page of which are filled with his thoughts on, well, everything. Isaacson does an excellent job of turning those 7,200 pages into a compelling portrait of a brilliant mind not so much at work as at play.

The essence of that mind was, Isaacson argues, a relentless curiosity. Leonardo was someone who simply wanted to know everything, and who thought it might be possible to do so. An important part of his genius was his willingness to ask questions that other people were literally ignoring. An example: “Describe the tongue of the woodpecker.” That’s an odd thing to tell yourself to do. As it happens, the woodpecker’s tongue is a natural marvel, and looking closely at a woodpecker’s tongue helped Leonardo understand some fascinating things about biomechanics.

Of course, Leonardo wasn’t just curious. He also had an unparalleled ability to “marry observation and imagination,” and to make big conceptual leaps. He used his studies of light and optics to create dimensionality in his paintings, which became “the supreme innovation of Renaissance art.” And his studies of anatomy, and his work on hydraulics, enabled him to understand things about the human heart that didn’t become fully understood for centuries.

Leonardo was, comfortingly, far from perfect. Not all of his conceptual leaps were correct. He was also an inveterate procrastinator who had a difficult time finishing anything, so much so that princes who commissioned work from him sometimes included provisions for what would happen if Leonardo didn’t deliver on time. But Leonardo’s weaknesses were, in a way, the flip side of his strengths. One reason he had a hard time finishing projects is that once he figured something out, or solved a problem in his own mind, he became less interested in turning the solution into reality.

Isaacson argues convincingly that in looking at how he did what he did, we can draw clear lessons that are applicable to our own lives.

One of those lessons is the value of diverse thinking — bringing insights from across disciplines to bear on problems, rather than staying confined within silos. The importance of making connections across disciplines has been a major theme of Isaacson’s work, and no one embodies it more than Leonardo did. In part, perhaps, because he lived at a time when disciplinary boundaries were much less rigid than they are today, Leonardo moved freely and easily between science and the humanities, anatomy and painting, fluid dynamics and urban design. This is harder to do now, as knowledge has become more specialized and the disciplines more professionalized. But the payoff from genuinely cross-disciplinary thinking remains immense.

Isaacson also emphasizes Leonardo’s willingness to be distracted and go down rabbit holes, as well as his embrace of fantasy and imagination. Some of Leonardo’s most famous “inventions,” such as his flying machine, appear to have been designed for theatrical pageants. Others — such as his giant crossbow — were really just thought experiments. But the process of imagining these things, and figuring out why they couldn’t work in real life, was itself illuminating. In business, especially, there’s constant pressure to emphasize practical applications of ideas. As Steve Jobs famously put it, “Real artists ship.” But Leonardo’s life is a testimony to the value of moon shots and letting your reach exceed your grasp.

In all his work, Isaacson has emphasized that innovation is fundamentally a collaborative process, and that the myth of the solitary genius is just that — a myth. Yet it’s true that Leonardo did most of his work, and had most of his insights, by himself. Perhaps what we can say is that had he had better partners, he might have produced even greater work. Indeed, when he did work with rigorous collaborators, such as mathematician Luca Pacioli (whose book on geometry he illustrated), Leonardo not only came up with brilliant concepts — he also turned them into finished, brilliant works.

There’s clearly a limit to what individuals and organizations can learn from Leonardo — try as hard as you can to study the world, and you’re still not going to be able to paint the Mona Lisa or invent a human-powered flying machine. But you do come away from this biography with a new appreciation for the enormous power of curiosity and the importance of questioning phenomena we usually take for granted.