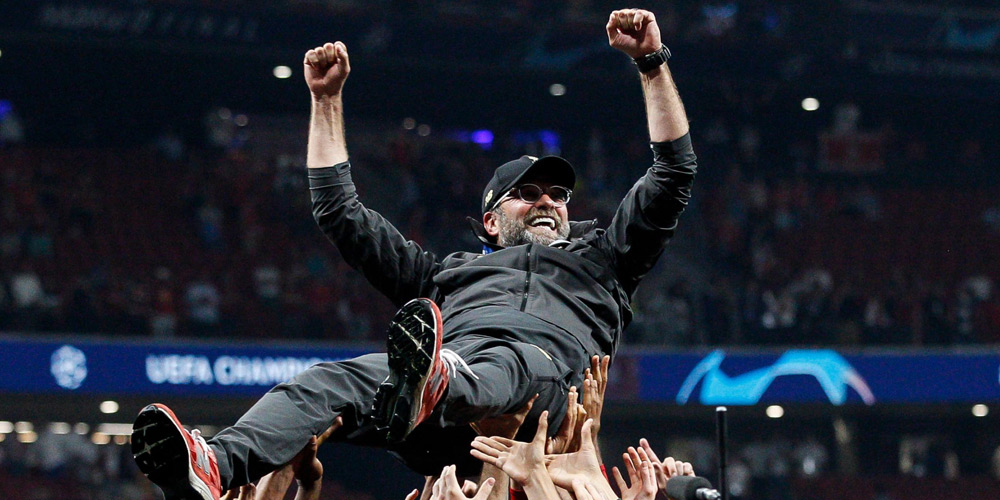 Jürgen Klopp, head coach of soccer team Liverpool FC, and recently voted FIFA’s Best Coach of 2019, likes to tell a story about motivating his players ahead of an important match. He showed them movie clips from Rocky IV of Rocky Balboa preparing to take on Ivan Drago. Klopp gave a rousing speech about Soviet technology, Siberian training camps, and good versus evil. But when he looked at his players, he realized they were too young to have heard of Rocky. No one had a clue what he was talking about.

“We think we’re giving the greatest speech in the history of football, and we’re actually talking complete nonsense,” is how he put it. “This is what actually happens in life. We are human beings. Sometimes, we embarrass ourselves. But we get up the next morning and we go again.”

Klopp has a toothy grin and a charming belly laugh. He gives his players regular bear hugs and big victories can move him to tears. That’s why in Germany, his photo appeared on the cover of Manager Magazin under the headline: Der Feelgood-Boss. The Wall Street Journal calls Klopp the model of modern management, and he is admired by coaches from soccer and other sports for his ability to connect with his players.

The story Klopp tells about Rocky goes to the heart of his success: He is just like us. He makes mistakes. He is authentic and vulnerable, the two characteristics Brené Brown, author of Daring Greatly: How the Courage to Be Vulnerable Transforms the Way We Live, Love, Parent, and Lead, says are key to social connection, which is an important component in helping people perform to their potential.

As we lose our trust in traditional institutions such as the church and government, and loosen our geographic ties, often moving away from family, we look for greater social connection and belonging in the workplace. “Work and home are the two hubs where we go to experience community and meaning,” says therapist Esther Perel, whose podcast How’s Work examines workplace relationships. “You want a place where you can experience a sense of personal development and purpose and meaning.”

The rise of the vulnerable leader is a move away from the old-fashioned command-and-control style of soccer leadership. Jürgen Klopp and a cohort of like-minded coaches have shown that managing requires honesty, empathy, and authenticity.

Klopp is at the forefront of a new wave of successful soccer coaches who seek to provide just such an infrastructure for their players. In the team environment that they create, vulnerability helps these coaches to unlock talent. It’s a lesson they’ve learned from the business world, where the idea that vulnerability can be an asset in inspiring team performance is not new. Although today’s sports megastars routinely get emotional after wins and losses, embracing vulnerability in sports management has lagged behind. Klopp, through his actions and personality, has helped turn vulnerability into a superpower.

Julian Nagelsmann is a German coach in the Klopp mold. The 32-year-old wunderkind is coach of RB Leipzig, who are currently challenging FC Bayern Munich for the German league title. He has described his job as “30 percent tactics and 70 percent social competence.”

We no longer expect our leaders to have all the answers, and it’s refreshing to hear them admit as much. “I don’t know the solution,” another German coach, Paris Saint-Germain FC’s Thomas Tuchel, told me during a frank conversation. “I can do it my way, but I never want to say, ‘I know how it’s done.’ I know nothing. I just try my things, and every day is new.” Tuchel is currently wrestling with the pleasant dilemma of getting the most expensive strike force in soccer history to perform.

England national team coach Gareth Southgate is yet another leader who has used his emotional intelligence to connect with his players and the public. His biggest moment of vulnerability came as a player in 1996, when he missed the decisive penalty in a European Championship semifinal defeat to Germany. “I’ve learnt a million things from the day and the years that have followed it,” Southgate said. “The biggest thing being that when something goes wrong in your life, it doesn’t finish you.”

In his role as coach, Southgate sees his players as people first and athletes second. He encouraged Fabian Delph to leave the 2018 World Cup squad to be with his pregnant wife for the birth of their third child (in the past, male players were expected to miss childbirth), he supported Danny Rose during his period of depression, and he has publicly backed Raheem Sterling as a powerful and respected voice against racism on and off the pitch. Under Southgate’s empathetic leadership, England reached the semifinal of the 2018 World Cup in Russia, its best result since 1990.

Southgate builds trust and drives commitment and engagement by expressing his emotions and encouraging others to follow — by reframing vulnerability as a strength. As Daniel Coyle, author of The Talent Code, said in his TED Talk on the subject: “When it comes to creating cooperation, vulnerability is not a risk but a psychological requirement.”

The coach of English Premier League side Brighton & Hove Albion, Graham Potter, has a master’s degree in leadership and emotional intelligence and is known for his discourses on Eastern philosophy. He is famous in Sweden for showing his vulnerabilities by dancing a ballet solo from Swan Lake in front of a packed local theater. It was part of a cultural project by his former Swedish team, Östersunds FK, designed to bring everyone out of their comfort zone and closer together.

Potter was nervous about the challenge, but the experience was a positive one. “If you rely on your position of power, it’s only a short-term solution,” he told me. “Sometimes it’s about not having all the answers. For me…this role is about whether you can affect someone’s life in a positive way.” Potter has been tipped to one day succeed Southgate as England boss.

The rise of the vulnerable leader is a move away from the old-fashioned command-and-control style of soccer leadership. Klopp and a cohort of like-minded coaches have shown that managing requires honesty, empathy, and authenticity. The results, on the pitch and in the boardroom, make it worthwhile. Klopp’s Liverpool is currently the reigning European champion and the club world champion. The team is on the brink of winning the English league for the first time in 30 years. Klopp is the architect of this dominance.