After eight years in prison, Dennis Kozlowski is scheduled to be released on January 17. You remember him: the former CEO of Tyco who Time magazine dubbed “Dennis the Menace” during the accounting scandals of 2001 and 2002 (which occurred before the lending scandals of 2008, which occurred before whatever scandals are currently being perpetrated). In 2005, New York state found Kozlowski guilty of stealing US$97 million of his company’s money, and handed down a supersized sentence for his crimes—eight-and-a-third to 25 years in the slammer and $167 million in restitution and fines. Just about everybody at the time was pleased with the verdict, but, according to Catherine S. Neal, author of Taking Down the Lion: The Triumphant Rise and Tragic Fall of Tyco’s Dennis Kozlowski (Palgrave Macmillan, 2014), it was a bum rap.

Neal, a business ethics and business law professor at the Haile/US Bank College of Business at Northern Kentucky University, became interested in Kozlowski after reading case studies of the Tyco scandal. She contacted him with questions and spent 30 months studying his case. Her conclusion: “The evidence in the case speaks for itself. I do not believe Dennis Kozlowski committed any crimes. I do not believe he ever intended to commit any crimes.” 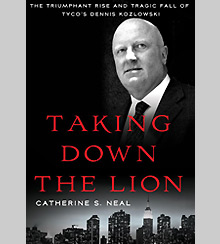 So why did Kozlowski go to jail? Neal thinks that he became a lightning rod for the widespread outrage and painful losses caused by the collapse of high-flying corporate empires such as Enron, WorldCom, and Global Crossing. Unlike those companies, Tyco survived. But as its stock was turning to ash, the media revealed that Kozlowski had been fiddling with a mouthwatering array of company perks that he used to pay for things like a $2 million toga birthday party in Sardinia, complete with a vodka-dispensing ice sculpture of Michelangelo’s David and a private concert by Jimmy Buffett. He also furnished his $30 million New York City apartment with a $15,000 umbrella stand and a $6,000 shower curtain, among other jaw-dropping excesses. His stupendous lack of judgment wasn’t criminal in the literal sense of the word, says Neal, but it made him a perfect scapegoat.

Kozlowski himself has gone on the record saying that he was guilty of all the charges for which he was convicted. But if you were in prison and hoping to get some time shaved off your sentence (which had already run far longer than the sentences of many murderers and rapists), wouldn’t you also apologize for your alleged crimes and show remorse?

Kozlowski did say something to the parole board in 2012 that had a ring of truth to it. By way of explaining his actions, he stated, “I was living in a CEO-type bubble. I had a strong sense of entitlement.” The board denied parole.

Neal makes a strong case that Kozlowski paid an unjustly high price for living in the CEO bubble, and whether she’s right or not, her book should be mandatory reading for company leaders. Neal closes Taking Down the Lion with a list of tips that can help them avoid paying a similar price. Most of them are simple and sensible, but the one I like most is a great lesson in unintended consequences: “Never ever sign an employment contract that says your employer can only be rid of you with no further financial obligation if you’re convicted of a felony that’s materially injurious to the company.”