In December, I wrote about Dave Eggers’ novel, The Circle, and its creepily claustrophobic depiction of a Big Brother–like corporation that monitors, evaluates, and addresses its employees’ every action to supposedly drive productivity. This week, I’m writing about The Circle’s non-fiction doppelganger: a new business book titled The Decoded Company: Know Your Talent Better Than You Know Your Company (Portfolio, 2014), by Leerom Segal, Aaron Goldstein, Jay Goldman, and Rahaf Harfoush. 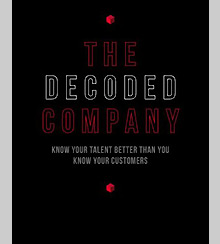 The main message of The Decoded Company is that companies are missing a major opportunity for growth and profit—by not applying the same technologies used to identify, track, and sell customers to improve employee performance. To remedy that, the authors say companies need to do three things: use technology as an employee trainer and coach, inform employees’ decision making with data, and create a culture that maximizes the ensuing benefits.

This all sounds very promising. If Joe Employee is struggling with some aspect of the task at hand, assistance can be delivered in real time. He doesn’t need to fail before he gets help, so his employer doesn’t need to bear the cost of that failure. Or before Jane Executive fires the manager of a project that has gone seriously over budget, she can consider a wealth of information regarding the manager’s performance and results over his entire tenure with the company.

Three of the book’s authors—Segal, Goldstein, and Goldman—are executives at Klick, a digital marketing agency serving global health clients. They say that they’ve integrated many of the tools needed to do these things into a system called Genome. Genome has helped Klick grow into a US$100 million company. It also helped them determine how many cups of coffee the company’s 400 employees drank in 2013. (The number was 61,392, in case you’re interested.)

But the underlying codicil is something of an iceberg: In order to create the “decoded company,” all kinds of employee data must be collected—when people come to work and when they leave; how much work they get done; how long they spend on the phone, on email, online; and so on. This data establishes the baseline that triggers performance alerts and provides the information needed for decision support.

In order to create the “decoded company,” all kinds of employee data must be collected.

So now the Big Brother string starts to vibrate. And it really sounds during a story in the book in which Segal and Goldstein decide that they can gain even more benefit from employee data—such as an early warning if a client relationship is headed south—if they scan and analyze Klick employees’ emails “for things such as tone, sentiment keywords, the formality of correspondence, and the frequency of both sent and received communication.” Ultimately, they abandoned the initiative: The email analytics system generates too many “false positives,” and it creates “tension internally.” I’ll bet.

The authors of The Decoded Company, like most marketers, are upbeat and they work hard to head off the Big Brother critiques. Sure, they admit, bad leaders could use a system like Genome to beat up employees, but those leaders wouldn’t be hired. (Or if they were hired, they’d soon be fired.) And Genome doesn’t collect personal information, only work data that the company has every right to see. Genome’s goal is not to command and control, but to enhance corporate results and make employees more successful and their work more empowering and fulfilling. The only problem is that I just read all the same rationales in Eggers’ dystopian novel last month.