Stop me if you’ve heard this one. Someone has a brilliant idea or comes up with an innovation that has transformative potential. Everyone gets excited. And in the end, the product that comes out is…mediocre. Somehow, in the journey from idea to execution, as the project was handed off from one function to another and then handed off again, the wattage of this extremely bright idea dimmed to a flicker. And everyone wonders why.

The why is actually simple: Handoffs are the death of innovation.

Handoffs, sometimes called business or departmental transitions, occur all the time — in the construction of buildings, in the development of apps, in the rollout of a new consumer product. But many companies fail to make connections or bring the right people to the room at these crucial points. And so businesses wind up spending thousands, if not millions of dollars on a product that, like Howard Hughes’s Spruce Goose, can’t really fly. Bright-eyed employees devote hours to an exciting project, only to see it tarnished along the way. And all because the ideas team didn’t tell the execution team enough about the product it was tasked with building. 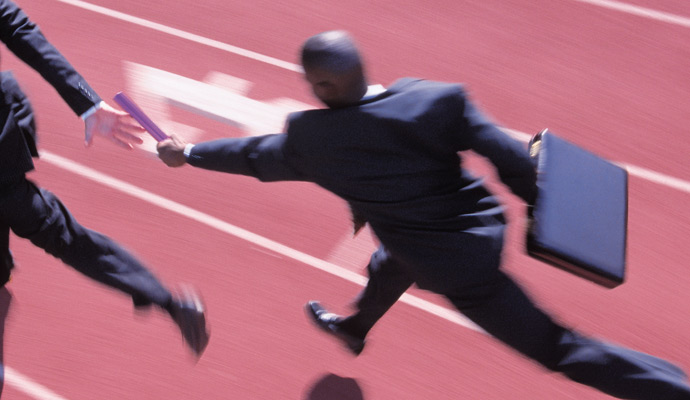 I’m sure there are some companies that hand ideas off correctly and effectively. But, honestly, I’ve had handoff conversations with dozens of businesses and haven’t found one that even thinks about its transitions in a holistic way.

Here’s the problem: In many cases, a great idea or initiative begins with a strategist or creative who comes up with a new product, service, or way of doing things. At some point, relatively early on, that person will transition the project to another team, or more likely, multiple teams. Coders get one part. User experience folks manage another part. Marketing starts to map out another part of the project, and legal grapples with the regulatory and compliance issues. They often work in parallel but rarely in tandem. And so on and so on through the stages of development.

As happens in a game of telephone, each handoff is an occasion for the project’s original purpose to be communicated incorrectly, or not at all. Every time new people join the process, they’re given different instructions, a different idea, or a slightly different twist on the idea than was given to the people who came before them. And as the project moves from team to team, what happens to the buy-in, the ownership, the passion? They are diluted by handoff after handoff. Think about what happens when people hand a pail of water down a firefighting chain — with each transfer, some of the liquid sloshes out. And by the time it is ready to be used, the pail is only half full.

Joe Brown, a former instructor in organizational behavior at Stanford Graduate School of Business, put it this way in a recent Harvard Business Review article: “If innovation projects are going to succeed, they’ll need to survive a handoff from an innovation team to an execution team. And every time you create a handoff, you risk dropping the baton.”

Handoffs fail with such frequency that a lot of smart researchers have looked into what causes them to come up short. In July 2017, the U.K.-based Association for Project Management (APM) released a report that said transitions tend to falter, in part, because the people with the ideas look at a handoff as the end of something, while the execution teams sees it as a beginning. The metaphor of the relay team is apropos here: A runner sprints like mad until handing off the baton to a teammate, and then collapses in exhaustion, barely watching the next leg. But in the business context, this makes no sense — and it leads to the first big destructive element of a handoff.

“Traditionally, project teams, including project managers, are not involved for any length of time beyond the handover of the project,” write the authors of the report. “In its very definition as a transient endeavour with defined endpoints, a project is something that is often packaged up and costed…with a project team being brought in to deliver it and then quickly move to another project.”

But too often, those handoffs are abrupt and imperfectly executed. Worse, those executing the design don’t fully grasp the intended benefits of their effort. When confusion sets in, the report explains, “the chance of realizing the benefits the project was commissioned to deliver in the first place greatly reduces.”

This is spot-on. In my experience, people tend not to see their work as part of a whole. They want to get their task finished and then move on and start again. This attitude trickles down the chain — if strategists don’t properly explain a project to designers, the designers won’t know what to say to the marketing people when the time comes to sell it. And the marketing people won’t know what to say to the advertising agency.

Of course, when implementing new ideas, the ideal scenario is for every single person involved to be part of the team from the beginning. Including everyone at the outset creates a shared basis of understanding and an outcome that will please all stakeholders. But that’s not how most companies operate — at least not right now.

So how can companies create transitions that work? In my experience, handoffs need a playbook. That could be a literal document that outlines a project’s every move as it develops. Or, in this post-text world, maybe it’s a video that explains in detail the outcomes you’re trying to achieve — one that shows what success looks like and then explains what it takes to get there. This has to be done in an engaging, effective way, so that anyone who sees it gets it. Each person working on the project needs to completely internalize the idea and its intended impact.

The benefits of a project or product must be clearly established and communicated to every single stakeholder from the start. And — wait for it — the results must be measurable. Otherwise, how do you know what success at each stage and the end look like? I’d go even further and say that at least one or two people from the team that created the initial idea should stick with it until the end in some meaningful, near-daily capacity.

I’d go even further and say that at least one or two people from the team that created the initial idea should stick with it until the end in some meaningful, near-daily capacity.

And these key employees shouldn’t wait for the end of the project to hash out the postmortem. You must identify issues on the spot and correct course while still in the thick of the work. Design your project structure with an open door, allowing people to stop and talk about what’s going wrong and how to fix it — in the moment, not next time. Take note of lessons learned and document them for the next project or idea in the pipeline.

All of this takes commitment, planning, and a different kind of mind-set and behavior than most companies are used to.

Companies that want to innovate need to have someone in place who is responsible for getting transitions right. In some organizations, it’s the chief product officer or his or her equivalent; in others it’s a strategist. This person must take responsibility for the handoff and the communication that goes along with it, and own the idea and the purpose to make certain everyone understands what the end result should look like. This single person should be present from the ideation phase and should be responsible and accountable for making every transition a smooth one.

Focusing on handoffs means rethinking the methods you currently use to see a project through. It requires practicing agile management and project development — ideating, iterating, moving quickly to adjust when things don’t work. But it could also involve incorporating DevOps techniques, which put development and operations teams in a feedback loop to encourage constant collaboration and interaction, and allow fast changes when needed. The single person seeing your plan through might need to tap employees who could serve as liaisons, or even as translators, between teams.

They’re not complicated, really, but poor transitions can have dire consequences. We can all think of once-innovative companies that now churn out boring product after boring product — and that’s often because otherwise bright ideas aren’t getting developed in the way they once were. Most customers will know, even if they can’t articulate it, whether an innovation was created by a group that worked in unison or by employees who just wanted to finish their job, pass the baton, and go home. If your team believes in what it’s doing and executes every step of the way, then your customers will believe in your products and services, too.