The photograph of the three tuxedo-clad titans of industry on the cover of Strategy Rules: Five Timeless Lessons from Bill Gates, Andy Grove, and Steve Jobs (HarperBusiness, 2015) could have just as easily been taken in 1898 as 1998. In the only picture of the three CEOs together, Gates, Grove, and Jobs smile out at us as if from the pantheon of business. As long as you remember names like Rockefeller, Edison, and Ford, they seem to be thinking, you will remember us, too. 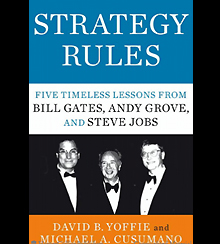 Rightly so. When the photo was taken, Andy Grove had just been named “Man of the Year” by Time magazine. He was getting ready to step down as the CEO of Intel, where, à la Ford, he had dominated his industry by continuously bringing cheaper, more powerful microprocessors to market. Bill Gates — the Rockefeller of his era — was the head of the world’s most powerful software company, an accused monopolist, and already the richest person on earth. Steve Jobs had returned Apple to profitability after a decade in exile, and was just beginning a run of disruptive innovation that would have made Edison envious.

Given the shelves of books that have already been written about the three CEOs who were most instrumental in shaping the personal computer era, it’s hard to imagine the need for yet another book about any of them. But the authors of this first comparative study of the three men, b-school profs David Yoffie and Michael Cusumano, are convinced otherwise: “We concluded that their approaches could help managers and entrepreneurs think more systematically about strategy, as well as execution, because they tackled key problems in similar ways,” they write. And they know whereof they speak: Yoffie teaches international business administration at Harvard Business School and Cusumano is a management professor at MIT’s Sloan School of Management.

For the most part, the strategic similarities of the CEOs are unsurprising. Yoffie and Cusumano tell us that each had a long-term vision for his company, but then took the essential second step of connecting vision to action. They made big, bold bets, but stopped short of all-or-nothing wagers that risked the survival of enterprises. They developed platforms and ecosystems rather than just products and services. They deployed the considerable leverage and power at their disposal to create competitive advantage (perhaps overly so, given that each of these companies attracted the unwelcome attentions of antitrust regulators).

The final similarity shared by Gates, Grove, and Jobs, however, is one that comes with warnings. The authors call it a personal anchor: “the leader’s unique skills and business insights.” For Gates, it was programming chops and a deep understanding of software. For Grove, it was engineering excellence and discipline. And for Jobs, it was an obsessive focus on design and user experience.

Although their personal anchors were very different, each CEO used them in the same ways, according to Yoffie and Cusumano. “The anchors drove their day-to-day focus as CEOs and guided strategic thinking as well as helped them make decisions ranging from who to recruit and how to delegate authority,” they write. The values and priorities they embodied became elevated into organizational routines and competencies that remain in place even today at Microsoft, Intel, and Apple.” In other words, these three leaders built their companies in their own images — and built them to last far beyond their tenures at the helm.

Despite the profitable persistence of these three companies, I couldn’t help but be troubled by this argument. The idea that you — or any leader — should “shape the organization around your personal anchor” is a dangerous one. The authors admit that it is a double-edged sword: “We can trace many of the limitations that Microsoft, Intel, and Apple have displayed in recent years to the decisions that Gates, Grove, and Jobs made as well as to the cultures and business models that they established.” Microsoft’s focus on programming and software, for example, is one reason its forays into other markets — like search, smartphones, and social networking — have been “slow and awkward.” Intel is still tied to Moore’s Law and the PC market even as the demand for microprocessors has expanded into mobile devices and the Internet of Things. And like its founder, Apple — now the world’s largest company by market capitalization and its most valuable brand — seems unable to move beyond serial innovation and the risks that entails.

In fact, much of the discussion in the book around utilizing your personal anchor is focused on how to temper its effects. Anchors provide much-needed ballast and stability. But they also limit movement, and if they become too large, or are moved too swiftly, they can cause the ship to capsize. Just so, you need to become aware of how your personal anchor can drag you and your company down, the authors warn. You need to build a leadership team that balances its weaknesses and distributes executive power. You need to cast a wide net for information and continually test the logic behind your decisions.

Gates, Grove, and Jobs certainly possessed weighty personal anchors, and they happened to appear in the right place and time to put them to profitable use. But you should think twice before you tie your personal anchor to your company and chuck it overboard.