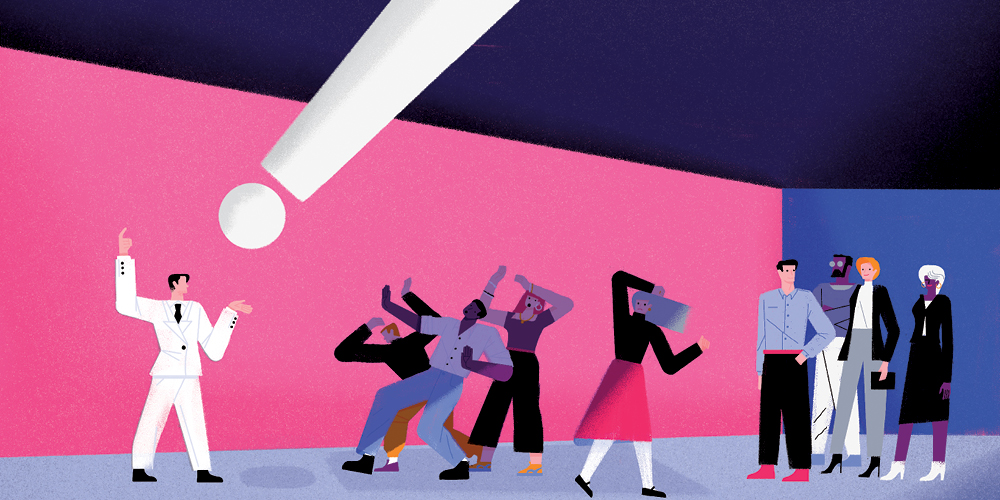 Imagine someone invented a new kind of fabric that never gets dirty and lasts forever. It’s so durable that you have to cut it with a blowtorch and so stain-resistant that you can’t even dye it. Would that represent a giant leap forward for humankind? And would humankind be ready for the leap?

Such are the questions at the heart of a deceptively sophisticated film called The Man in the White Suit. This 1951 classic from the heyday of Britain’s Ealing Studios stars Alec Guinness in the darkest of satires. But it’s also a profound parable about the hazards of innovation, the difficulties of accommodating change, and the revolutionary nature of technology. Every business leader ought to see it, and since every minute of it is fun, there’s no excuse not to stream it. You can probably take the $4 off your income taxes.

The Man in the White Suit is a profound parable about the hazards of innovation, the difficulties of accommodating change, and the revolutionary nature of technology.

The movie may yet captivate a new generation, at least in the U.K., thanks to the attention brought to it by a stage adaptation scheduled to run from September 26 through January 11 at Wyndham’s Theatre in London’s West End.

The film version of The Man in the White Suit tells the story of Sidney Stratton, played by Guinness (perhaps best known to younger audiences as Obi-Wan Kenobi in Star Wars) as a brilliant and eccentric University of Cambridge dropout with a very big idea. After bouncing from one textile company to another, he finally lands at the vast Birnley works, in a mill town near Manchester. There, as elsewhere, management regards him as a nuisance — until his cause is taken up by Daphne Birnley (Joan Greenwood), the head honcho’s glamorous and shrewd daughter, who finally manages to get it into her father’s hidebound skull that Sidney is onto something.

Given the kind of lab and resources that only a major player can provide, Sidney perseveres through a series of terrifying experimental explosions to produce the remarkable new fabric, which is cut (with no small effort) into a radiant white suit for its inventor. Talk about immaculate conception! The effect is a bit like a whole-body version of Michael Jackson’s white glove. It practically glows in the dark, capturing beautifully the purity of the young inventor’s sense of himself.

“It looks as if it’s wearing you,” Daphne says when she sees it.

“No, it makes you look like a knight in shining armor. That’s what you are.”

Daphne’s father sees immense profits in the invention. But Daphne, sharing Sidney’s idealism, assumes it will be a boon to humankind, setting people free from shabbiness and dirt. “The whole world’s going to bless you,” she exclaims.

Well, not exactly. When leaders of the powerful textile workers’ union get wind of the new product, they recognize right away that it would be the end of everyone’s job. “That’s lovely,” says one. “Six months’ work and that’ll be the lot. Every mill in the country will be laid off.”

But the workers aren’t the only ones with a strong class consciousness. After Daphne’s erstwhile fiancé, who runs a competing mill, sounds the alarm in industry circles, the elder Birnley receives a visit from the ancient but formidable Sir John Kierlaw, a godlike grandee before whom textile titans quake. Working in concert, industry leaders prove just as determined as the union to quash the new invention — something both sides know can happen only if they quash its inventor.

It’s all great fun, but you can’t overlook the many things the movie tells us about technology and society. First, there’s the innovator’s Promethean idea of himself as a bringer of light to the benighted. It doesn’t cross his mind that anyone would consider an indestructible suit to be a bad thing. He’s so naïve that, as one of the union workers says, “You’re not even born yet.”

Sidney wises up soon enough, yet his idealism persists. He won’t take money to suppress his discovery, not even when it seems the only way to win over Daphne. Sidney wants success of course, but he’s driven to improve the world — and perhaps most of all, to satisfy his intellectual curiosity. He embodies the tenacity and self-confidence that are indispensable to every radical innovator.

These qualities help him turn a blind eye to the disturbing fact that an awful lot of innovation creates losers as well as winners. Turning those losers into winners — usually in another line of work — is no mean feat, and may be a possibility only for their descendants. In fact, a new technology might not get adopted at all if the prospective losers recognize who they are. In many cases, they are more visible, more vocal, and more motivated to organize than those who might stand to gain from an innovation.

Carl Benedikt Frey, codirector of the Oxford Martin Programme on Technology and Employment, has some interesting things to say about this in his new book, The Technology Trap: Capital, Labor, and Power in the Age of Automation.

“When large swaths of the populace are left behind by technological change, they are likely to resist it,” he writes, just as the workers did in The Man in the White Suit. And whether they succeed depends on how much political power they have. In quite a few instances, the workers had succeeded, or at least they did for a long time. The gig mill, a machine for raising the nap on fabric, was banned in Britain in 1551, and in 1589, Elizabeth I wouldn’t grant a patent for a stocking knitting machine. In the next century, some European cities banned automatic looms.

Indeed, Frey writes, “before the late 19th century, resistance to technologies that threatened workers’ skills was the rule rather than the exception.” The Luddites are famous as textile workers who broke up machinery in early 19th-century Britain, but “they were just part of a long wave of riots that swept across Europe and China.”

Like most Britons at the time, the Luddites couldn’t vote, because exercising the franchise required property ownership. So they lacked the political power that might have given them greater success. “In fact,” Frey explains, “the British government was the first to side with the pioneers of industry rather than rebelling workers, providing one explanation for why Britain was the first country to industrialize.”

How is this relevant today? Well, technology, and particularly artificial intelligence, once again threaten skilled workers. “As there has been a populist backlash against globalization,” the author writes, “we should be concerned that populists might easily and effectively tap into growing anxiety about automation as well.” Globalization and technology, of course, go hand in hand.

Employers shouldn’t feel threatened by a new technology that can eliminate the need for human workers. But they might worry if it were to eliminate their industry entirely, as seemed likely in The Man in the White Suit. So in the film they band together, in the worst form of crony capitalism, to suppress the new miracle fabric. They also frantically deny rumors of the invention, which have cropped up in the newspaper and pummeled share prices.

Before the movie is over, Sidney comes to see that his invention threatens a vast commercial ecosystem, from the chief executives in the grandest homes to the washerwoman who does their laundry. “Why can’t you scientists leave things alone?” she says plaintively. “What about my bit of washing when there’s no washing to do?”

The incredible affluence of the modern world, to say nothing of modern social arrangements, is owed largely to technology. The challenge for today’s Sidney Strattons, business leaders, and politicians is to find ways for innovation to continue augmenting human labor rather than merely taking its place. They will also have to acknowledge that innovation produces not just winners, but some potentially very sore losers. And thanks in part to technologies such as social media, innovation’s expendables are more powerful than ever.