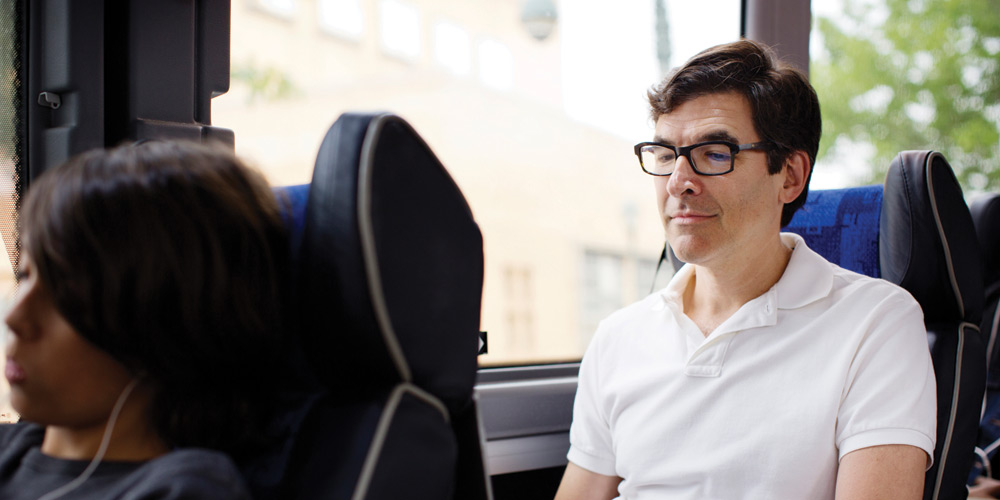 “We lose 20 hours a week,” a working mother in Florida I interviewed for my book, All In, told me. “Ten hours for each of us.” She was describing what I call the worst time sucker in America: sitting in traffic.

During the years I spent as a reporter at National Public Radio, I used to joke that I appreciated the traffic because it gave us so many listeners. But I was very much kidding. When I see bumper-to-bumper traffic, I think about the negative effects: environmental damage, to be sure, but also the destruction of hours people could be spending getting work done or, better yet, with their families.

Things aren’t improving. Commutes overall have been ticking slightly upward, now averaging more than 53 minutes round trip each day, according to the Census Bureau. Among the worst places to commute is the booming, sprawling Washington, DC, area. Bloomberg calculated that workers in Charles County, Md., about 40 miles south of DC, spend a total of “388 hours — or just under two and a half weeks” a year traveling to and from work.

All that time, along with the physical experience of driving in heavy traffic, takes a heavy toll on people’s health and happiness, as Scientific American has reported. It also hurts businesses in numerous ways:

• Productivity goes down; an extensive study in the U.K. found that people whose commutes are under 30 minutes have seven more days’ worth of productive time each year than those with commutes of an hour or more.

• Turnover goes up; a survey found that 23 percent of workers have quit their jobs because of a bad commute.

• Absenteeism spikes; a study by two Dutch academics estimated that absenteeism would decline by 15 to 20 percent if commutes were negligible.

Bloomberg calculated that workers in Charles County, Md., just south of DC, spend a total of ‘388 hours — or just under two and a half weeks’ a year traveling to and from work.

As strategy+business executive editor Daniel Gross has discussed in these pages, the core of this problem is that jobs and affordable housing are not available in the same areas. Numerous fixes are needed, including quality public transportation and “workforce housing,” in which businesses get involved in building and/or maintaining residences that are affordable for the people whose salaries they pay.

Teleworking is also necessary, and human capital experts seem to agree that it makes workers more productive, even when they’re sick.

But for those who need to get to the office, there’s another relatively quick and simple step many large businesses can take to avoid some of the productivity and well-being losses associated with lengthy commutes: making Wi-Fi-enabled buses available as mobile offices. They could save money, get some cars off the road, attract and retain employees, reduce stress, and still ensure productivity.

In most metro areas, large numbers of people travel from suburbs or residential neighborhoods to corporate offices. Many travel from the same or adjoining areas to the same offices. Most people — about three-quarters — drive alone, while less than 10 percent carpool, U.S. census figures show (pdf).

Imagine that instead, workers in suburbs could take a short drive (or walk, or bicycle or scooter ride) to a pickup point for a bus sponsored by their employer. The moment they got on, their workday could begin. The bus would be equipped with superfast Wi-Fi and outlets. Workers who spent the ride working would be able to shorten their workday. They might get started on emails, sit in on conference calls, and so forth. Others could use the time to rest.

These buses would cut travel time by using high-occupancy vehicle (HOV) lanes. Unlike public transportation systems, they would ferry employees directly to and from the door of their buildings, with no need for transfers. And workers wouldn’t have to deal with parking. At the end of the workday, the bus would also take them back to the pickup point, thus affording people the opportunity to finish up tasks.

Smaller businesses with offices in the same buildings could pool together to offer this service. And the relatively minor expense that businesses would pay for the bus (or a few buses, fanning out to different areas) would be small compared to the savings.

For All In, I asked a bunch of people which they would prefer: a job that paid US$10,000 more than they were making or one that offered this benefit. Almost all said they’d choose the latter. That’s little surprise; PwC has found (pdf) that today’s workers increasingly value work–life balance over financial rewards.

But there would be other savings as well. The company wouldn’t need parking spaces for employees who choose the Wi-Fi bus. And it’s quite possible they could work out a local or state tax break for pulling cars off the road. Toss in the happier, healthier, more productive employees, and the savings would add up.

If you wonder whether it would work, look at something that’s already underway in Silicon Valley. Facebook, Apple, Google, and other tech giants are already running similar services. These buses have sparked controversy in San Francisco, where some residents see them as what Wired has called “a rolling symbol of a class war” because they ferry highly paid tech workers out to fancy offices while many people working in the city can’t afford housing. But the buses I envision would more often do the opposite geographically, ferrying people into cities.

If enough businesses were to offer such services, the environmental benefit could be tremendous. Cars generally emit around 0.7 pounds of carbon dioxide per mile; in heavy traffic, that can go up to two pounds. With 50 seats, the bus could prevent up to 100 pounds of carbon dioxide emissions for every mile of its route. Now imagine that such services would utilize the electric-battery buses that are slowly beginning to roll out on the roads. One study has found they’re 2.5 times cleaner than diesel buses on average. And in areas where hydro, wind, and solar account for a great deal of electricity, like the West Coast, the fuel powering these buses could be largely free of emissions.

Of course, some employees might regard this as simply one more benefit — like the provision of free food and snacks on-site — aimed at tethering people more closely to their offices and promulgating an always-on culture. And that danger certainly exists. But the power of Wi-Fi-enabled buses lies in the option that it offers to employees. It’s a way to spend part of a standard workday, not extra hours in addition to one. And for those who prefer to work full days at the office and then veg out on the ride home, with a podcast or streaming a sitcom, the buses would still provide environmental, comfort, and mental benefits by turning the commute into downtime.

Mass Transit magazine has called for government agencies to make Wi-Fi-enabled buses “the foundation for building a smart city.” But businesses have a role to play too — and many could get programs like this going quickly, with little red tape. Doing so would help enterprises make big strides in both the “war for talent” and the climate crisis.