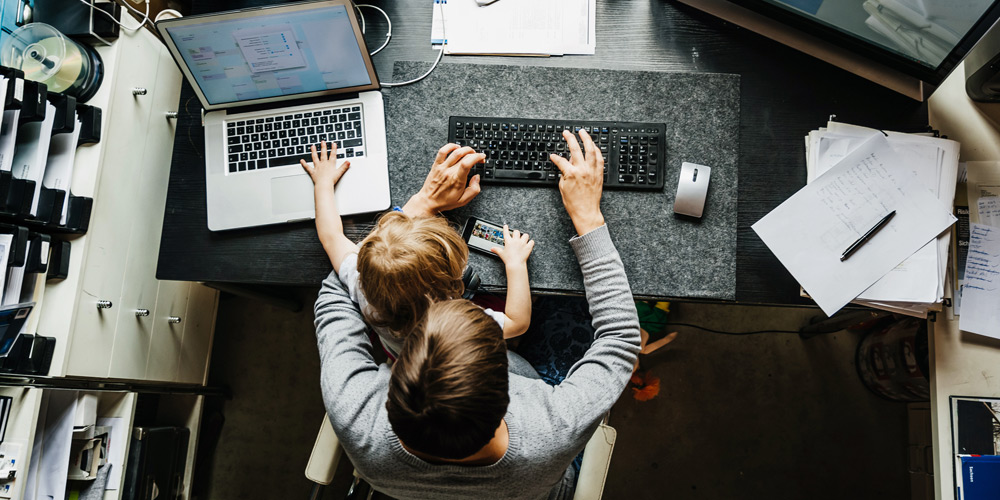 This year has brought unprecedented upheaval to American parents. With kids at home as a result of the COVID-19 pandemic, sick loved ones needing care, and rising unemployment, mothers and fathers have been under tremendous strain.

The American Psychological Association’s survey on Stress in America 2020, published in July, found that “parents are, on average, feeling significantly higher levels of stress than adults without children.” On a 10-point scale, the parents surveyed put their stress at 6.7 on average, with nearly half saying it’s between 8 and 10. When I asked the APA for a breakdown by gender, they informed me that there was no “statistically significant difference” between mothers and fathers.

But there is a gender difference in how this time is affecting people’s participation in the workforce. A reportPDF by the National Women’s Law Center found that in September, four-fifths of those who dropped out of the labor force — meaning they were no longer working or officially looking for work — were women.

Although this report did not focus on parents specifically, other research has noted that working mothers are more likely to be pushed out of the workforce. “No one is experiencing business as usual, but women — especially mothers, senior-level women and Black women — have faced distinct challenges,” Lean In noted when it launched the 2020 Women in the Workplace report. “One in four women are considering downshifting their careers or leaving the workforce due to COVID-19.”

Women, of course, have long been more likely to drop out of the workforce for caregiving. In research for my book, All In, I found that one of the biggest reasons is that men are even less likely than women to be given the flexibility to do caregiving at home. A survey by Dove Men+Care (with which I partner on work involving fathers as caregivers) found that both women and men report that attitudes among managers at work make it especially difficult for men to get time for caregiving. Parents are then left with no real choice. Also, the wage gap means men often make higher salaries, so when families decide to give up one salary, it’s more likely to be the mother’s.

So what’s the solution? For businesses to make sure all parents have what they need as they face the challenges of running a home during COVID-19 and excelling at their jobs.

What do working parents need most? Kimberly Jones, people experience and markets leader for PwC US, explains that the top four things they’re asking for are:

• Flexibility, including the ability to work outside their usual hours and options for reduced schedules or time off

• Help with childcare, such as increased reimbursements for backup childcare and discounts on in-home placements

• Assistance with home schooling, which could include reimbursements for tutoring or tuition programs

Through my work making fathers an equal part of workplace programs focused on equality, diversity, and work–life balance (or integration), I interact with working parents across numerous industries as well as leaders of ERGs (employee resources groups). In recent weeks, I’ve been reaching out to various contacts to ask what other resources or tools their businesses could provide that would help them lower stress and boost productivity. Here are some of the ideas they’ve shared.

An internet boost. With millions of kids doing school via Zoom or Google Meet while parents telework, internet usage has seen a “dramatic surge.” That can slow down work and force families to pay for more data or faster connections. “The number one thing would be an additional source of internet for the house,” says Michael Kaufman, a writer and consultant in New York focused on consumer technologies. “We’re having major bandwidth issues with two adults and three kids online.” Beth Seyle Fenton, a partner at a law firm in Wilmington, Del., and mom of two, says, “I was lucky enough to have a firm-provided hotspot when we locked down, but this was a huge issue in our house.”

Daily blackout times. Kids need structure and routine. Organizations should work with parents to determine if there are hours when they need to be fully unavailable every day because their kids will need them at those times, says Elaine Lewinnek, a professor at California State University, Fullerton, and mom of two. For her, it means to “stop scheduling meetings from 11 a.m. to 1 p.m. My kids will have a lunch-related meltdown if I don’t feed them sometime during that time block,” she says. For someone else, it might be putting a child down for a nap at a different time. The key is to make this a daily expectation, so the working parent isn’t having to ask to reschedule meetings during those times each day.

Organizations should work with parents to determine if there are any hours when they need to be fully unavailable every day because their kids will need them at those times.

Record meetings. “Record department/all-staff meetings or do recorded video messages instead,” Fenton adds. “This enables parents to watch the meeting at a more convenient time or attend as much as they can and watch the rest on video. Also, shorten these types of meetings to eliminate unnecessary communications that can be made by email.”

Protections for hourly employees. Many of the workers struggling the most now are those who operate on hourly schedules, and are paid only when they work. A woman who works in a daycare facility (who asked to remain anonymous) told me what happened to her and her colleagues when the facility shut down: “Many of us were off work, with no pay, for nearly four months.” Although some U.S. government support was designed to help people in these cases, for many, it wasn’t sufficient. Lewinnek says businesses should allow hourly workers to bank their paid time off, and should make paid administrative leave available to hourly employees for events outside their control.

When I work with companies, I tell them that, above all, the most important thing they can do to help anyone with caregiving responsibilities — not just parents — is to communicate with them. Ask what would work. Invite and consider ideas. Doing so not only leads to helpful changes, it also reflects well on the culture of the organization. This helps explain why, when I recently asked on LinkedIn what employees need most from businesses at this time, Catalyst vice president Pamela Kruger responded with one word: “empathy.”

How do you make life-changing ideas a reality?
In Episode 2 of s+b’s Take on Tomorrow podcast, Wellcome Leap COO Ken Gabriel and PwC UK’s Leo Johnson talk about accelerating the pace of breakthrough innovation.